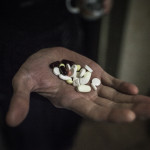 World TB Day is an opportunity to reflect on the progress that has been made in beating this ancient disease. At first glance, the news looks good: two new drugs—the first in decades—have been registered for hard-to-treat multidrug-resistant tuberculosis (MDR-TB) and the global rate of new cases of MDR-TB has remained stable at 3.5%.

However, appearances can be deceptive. While the global rate of MDR-TB is stable, on closer examination the data are not complete; many parts of the world are dealing with a serious and growing MDR-TB crisis. In some countries, including Belarus, Kyrgyzstan, and Kazakhstan, up to 35% of people diagnosed with TB for the first time already have MDR-TB, and more than 70% of patients previously treated for TB now have MDR-TB.

These countries are facing a potential future where MDR-TB is the “normal” TB diagnosis. Both MDR and the even-more-severe extensively drug-resistant TB (XDR-TB), carry huge human and financial costs. And the cure rates are abysmally low: around 50% for MDR and 20% for XDR-TB.

What about the new drugs? Bedaquiline and delamanid were approved for use in treating MDR-TB more than a year ago, but they are not yet getting to the people who need them the most. Globally, fewer than 1,000 patients have had access to bedaquiline since its registration, and most of these have been through compassionate-use programmes; the numbers for delamanid are even more depressing, with fewer than 10 people gaining access outside clinical trials.

Uptake of these drugs remains slow despite the growing evidence of their benefits. At a recent symposium in Armenia, outcomes from compassionate use of bedaquiline were encouraging. In the Médecins Sans Frontières (MSF) programme in Armenia, 54% of patients on bedaquiline tested negative for the TB bacterium after 2 months, and 84% by 6 months, but the total number of patients (53) was relatively small. Compassionate-use programmes, which are not available everywhere and have limited scope, are not the solution.

The new drugs must be made available to all who have a medical need for them. This would involve the new drugs being registered in TB-endemic countries, included in national guidelines and made affordable along with the full range of quality-assured companion drugs needed for successful treatment.

Otsuka, the maker of delamanid, has not submitted the drug for registration in any high TB burden countries, and the price of the drug is as yet unknown. Janssen, the maker of bedaquiline, has been more proactive in registering the drug in endemic countries, but is using a tiered pricing structure that makes the drug unaffordable for the countries that need it the most. The price barrier for bedaquiline has been temporarily lifted, for some countries, with the announcement of a drug donation programme, but this is not a lasting or comprehensive solution, as it will fulfil only a portion of the global needs and only for a limited time.

Earlier this month, 88 civil society organisations signed a letter calling on global health actors to step up and ensure that new and promising DR-TB drugs reach people who are otherwise without treatment options. In response, WHO agreed to convene a meeting to discuss the proposal of a consortium that would dedicate itself to setting and meeting global targets. This consortium would create a framework to provide the necessary support to ensure that national governments have the information, technical assistance, and resources they need to rapidly make new and repurposed DR-TB drugs available.

The targets called for by the civil societies are achievable; in fact, they should already have been accomplished. The new consortium needs to act with the urgency and collaboration that the current MDR-TB crisis demands.

Next year, the conversation needs to move beyond the headlines to hard numbers—how many people, in how many countries, are benefiting from the new drugs? How many trials are underway to maximize the impact of these new drugs? What is the cost of a regimen for MDR-TB? Without adequate answers to these questions, MDR-TB will continue to defy us.

Grania Brigden is the TB advisor to the MSF Campaign for Access to essential medicines.