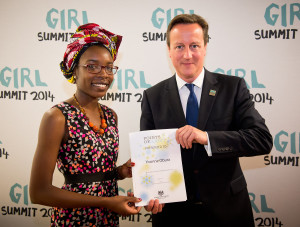 Female genital cutting (FGC) or mutilation (FGM) is the removal or injury of the external female genitalia for non-medical purposes. It is estimated that 125 million women and girls worldwide are currently living with the effects of FGC, and a further 30 million girls are at risk of being cut within the next decade.

FGC has been illegal in the United Kingdom since 1985, with the passing of the Prohibition of Female Circumcision Act. This was subsequently updated in 2003 to the Female Genital Mutilation Act, which carries a maximum prison sentence of 14 years. Despite this, there had been no prosecutions until earlier this year when a doctor and a man had charges brought against them under the act.

During my foundation year training on an obstetrics and gynaecology rotation, I came across a woman who had been cut as a girl. After reflecting on this case with my colleagues, I quickly realised that only a handful had heard about FGC and even fewer were comfortable with broaching the topic with a patient. My own knowledge was limited then and I remember having mixed feelings about this woman. I felt angry that someone would subject a little girl to such brutality. I felt pity for the woman and the trauma she sustained all those years ago. I immediately judged her husband as a man who would have expected his wife to be cut, and yet, I was touched by the tenderness and love he showed towards her. I needed to explore this issue further.

Given that FGC carries such far reaching medical and psychological consequences, I felt that it was important for healthcare professionals to be aware of this practice. One way of ensuring that doctors have at least a basic understanding of FGC is through undergraduate training. I therefore decided to take a year out of training after my second foundation year and approached the FGC charity Orchid Project. With their support, I put together teaching resources aimed at medical students and subsequently wrote to all the medical schools in England and Wales, asking them for the opportunity to speak to their students.

The initial uptake was rather lukewarm (three medical schools expressed interest within two months of receiving my correspondence) but interest picked up towards the end of 2013, largely because of increased media coverage of FGC. Brighton and Sussex Medical School was the only school to declare that they already provide extensive teaching on FGC.

My talk to students began with a PowerPoint presentation that lasted 25 minutes. I started off by discussing the various terminology used when speaking about FGC. I stressed that while “mutilation” is an appropriate and descriptive term, it can make some women feel defensive and judged, and so is best avoided when addressing patients. The term “circumcision” is used in some communities, but it should be discouraged as it implies a parallel with male circumcision when the two practices are very different. “Cutting” is generally more acceptable and knowledge of culture specific terminology (e.g. Sunnah) is encouraged.

I then moved on to discuss the history of FGC and its worldwide distribution. I covered the classification and health complications, specifically those related to pregnancy and childbirth. I addressed the social norms and myths associated with FGC, and why simply dismissing them is not effective. I also discussed FGC in a UK context and how healthcare professionals should respond when the suspicion of high risk arises. After the talk, I invited questions and discussion from the audience. And, if time allowed, I showed the film The Cutting Tradition, which explores why FGC is carried out in four African countries.

Between October 2013 and July 2014, I presented 15 talks at 13 different medical schools in England and Wales. This included two panel events: one at the University of Manchester, which discussed the medical, social, grassroots, and community aspects of FGC, and one with University College London/ Imperial College London, where I was joined on the panel by prominent anti-FGC campaigner Leyla Hussein.

At the University of Cardiff, I met with the head of obstetrics and gynaecology and discussed ways of incorporating FGC into their undergraduate curriculum. After my talk at the University of Birmingham, a student arranged a meeting with the School of Medicine to discuss why she felt it was important that FGC was included in the curriculum.

In June, I had the opportunity to meet with the secretary of state for international development, the Rt Hon Justine Greening, to discuss what I’d been doing and to share experiences with others involved in FGC campaigning.

The pinnacle of the year came in July when I was invited to attend the Girl Summit, where delegates from all over the world came together in London to galvanise efforts to bring an end to FGC, as well as early and child forced marriage. I also received the Points of Light Award, which is awarded by the prime minster in recognition of contribution to volunteering. The subsequent contact from various media outlets afforded me the opportunity to spread the FGC awareness message to a wider audience.

Carrying out this project has been exceedingly rewarding and eye opening for me. There is certainly a thirst among students to learn about FGC in order to better serve their patients, and it is encouraging that some medical schools are responding to this. I still feel that there is a need to formalise FGC education so that every student can benefit from exposure to this emotive issue in a controlled environment. The best way to ensure this would be through mandatory undergraduate training across all UK medical schools.

Yvonne Obura is an obstetrics and gynaecology ST1 at Dorchester County Hospital.