Having the opening day of a major health conference on a Sunday seems slightly unusual to a British or Irish conference goer but thousands gathered in the gorgeous autumn sunshine of California to meet and debate on public health at a crucial time of health and healthcare in the US.

The Annual Meeting of the American Public Health Association (APHA) is the largest gathering of public health professionals in the world and this year’s meeting, the 140th, is being held in San Francisco. Despite the pressures on public sector budgets the number of people attending has held up and around 14,000 are gathering under the theme “Prevention and Wellness Across the Lifespan.”  The effects of inequalities across the lifespan was well illustrated by massive posters inside and outside the conference centre showing some of the enormous differences in life expectancy present in the USA.

Two major events are overshadowing the meeting, however. Firstly and predominantly is the presidential election due on November 6. The members of the US public health community are passionate supporters of the healthcare reform brought in by President Obama and they are very explicit about the outcome they wish to see in the election. 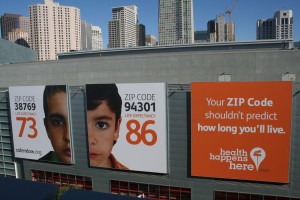 Nancy Pelosi, Democratic party congresswoman for San Francisco and former speaker of the House of Representatives, made a surprise appearance as a speaker during the formal opening session of the meeting. She recounted how on the night that the Affordable Care Act was passed she received a telephone call from President Obama and he told her that he was even happier than the night when he was elected president. In a warm and heartfelt address she thanked the public health community for all they had done to support the passage of the Act. Having banged the drum for the Act, and for further reform, she outlined the case for increasing effort on prevention. She caught it beautifully when she pronounced on the way forward, “It’s about diet, not diabetes”.

The clearest message about where the public health sympathies will lie in the presidential election came from APHA president Melvin Shipp when he told the audience: “The Afordable Care Act is known as ‘Obamacare’ because Obama cares.” He didn’t need to actually mention Romney!

It will seem odd to many people, it certainly did to me, that the very first guest speaker at the meeting was the chief of medical affairs of UnitedHealth, the international private healthcare company. In the UK such companies are seen by many as potential beneficiaries of the dismantling of the NHS that is taking place under the coalition government. But in the US there is apparently no contradiction between espousing healthcare reform and having cordial relations with the private healthcare industry.

The second major event dominating San Francisco has been the World Series baseball games. The San Francisco Giants beating the Detroit Tigers was the cue for noisy and extended street celebrations on Sunday evening and can only strengthen the feeling of many residents that they live in what they believe to be indisputably the finest city in the country.