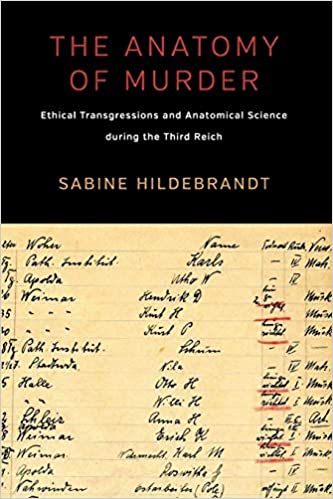 In the summer of 1996 I turned thirteen and my family moved from Canada to Berlin. Because of my Jewish upbringing, I had a developed awareness of the history of World War II and the Holocaust. Despite that awareness, I was unprepared for the subtle, almost banal traces of the Nazi past that were everywhere in Berlin—on discreet plaques on the façades of buildings, in the names of subway stops, even on the ground beneath my feet. Stolpersteine, or stumbling stones, sat amidst the regular sidewalk cobbles in front of the homes of deported Nazi victims. Those brass stones, inscribed with victims’ names, stuck out just enough to cause passersby to stumble on them, look down, and read. In Germany, history literally tripped you up.

For Harvard anatomist Sabine Hildebrandt, growing up in Germany soon after the war meant a childhood spent in what she calls the “silent aftermath” of National-Socialism. Public memorials large and small were omnipresent in Germany by the 1990s; less so in Hildebrandt’s youth. She was left to intuit a painful history from fragments of conversation, a landscape dotted with abandoned synagogues, and awkward silences at the mention of certain topics. A lack of evidence—rather than its presence—was the striking clue. From then on she developed a curiosity for the past, which, one gathers, is the impetus for her book The Anatomy of Murder: Ethical Transgressions and Anatomical Science During the Third Reich, the first systematic study of anatomy under Hitler’s regime.

Although it was published in 2016, the book recently came to my attention thanks to a New York Times article about Hildebrandt’s involvement with an investigation of anatomical practices at Strasbourg University during the war.1 I spoke to her about her work for a recent episode of my podcast, Practicing.2

Hildebrandt catalogs with an anatomist’s deliberateness the ways the Nazi regime facilitated a massive increase in the number of bodies available for dissection and study. She reminds us that anatomy’s need for a steady supply of dead bodies has always been a problem; anatomists depended on unclaimed bodies, the bodies of the executed, or even grave robbing for material. After Hitler came to power in 1933, state-led repression, incarceration, execution and murder, as well as laws making it more difficult to claim the bodies of the executed for burial, created what one might queasily describe as a bonanza for the anatomical sciences.

How did anatomists respond to this sea change in the political and legal regime? While many were pushed out of their positions early on because they were Jews, Communists, or Socialists, Hildebrandt provides a clear and useful typology for understanding the attitudes and actions of those who remained: pragmatists, opportunists, ideologues and discreet dissenters. Case studies of specific anatomists provide shocking details that stick in the mind.

Hermann Stieve, a reputed anatomist before 1933, is the stand-out opportunist. He worked hand in glove with authorities at a Berlin prison to change execution times so that dissections could occur on the day of death. As a gynecological anatomist, he capitalized on a significant increase in executions of women, many of whom were political prisoners.

Ideologues such as August Hirt ruthlessly married their Nazi convictions with a zeal for research. Hirt, a fervent Nazi and SS-man and anatomy chair at the newly Germanized university in Strasbourg, hand-picked 87 living Jewish detainees of Auschwitz to be executed in order to create a Jewish skeleton collection, which was never completed. He himself arranged for 86 victims to be gassed (one victim died in transport). In an apt and chilling phrase, Hildebrandt refers to Hirt’s victims as the “future dead.”

On the other end of the spectrum, open dissent was a career ender—or worse—and thus essentially impossible. Hildebrandt cites only one example of an anatomist who resigned in protest for reasons of conscience.

There was no great reckoning for German anatomy after the war. As Hildebrandt told me, “the old teachers were the new teachers, the old researchers were the new researchers.” After a perfunctory denazification process for former party members, almost all anatomists returned to work. Nearly none stood trial. Hirt, a murderer, evaded justice through suicide. Stieve, never a party member, resumed a respectable career without even undergoing denazification.

Meanwhile, the remains of Nazi victims were still in academic collections, or were quietly removed and buried, an open secret in German academic medicine. It was not until 2014 that the German Anatomical Society finally acknowledged the discipline’s actions under the Nazi regime.

Yet the story Hildebrandt tells is not only a German one. Nazi anatomists’ work implicates medicine as a whole. Their research was published, read and widely used. Some tainted sources still have clinical and academic value, such as the anatomical plates drawn from the bodies of Nazi victims (by avowed Nazis) in Joseph Pernkopf’s notorious but magnificent Atlas of Topographical and Applied Human Anatomy.

We may use this material to help others, Hildebrandt argues, if we acknowledge its violent origins. We cannot undo the past, but we can make it visible. Explanations must be added to sources like the Pernkopf Atlas so that, while studying and researching, we stumble upon the truth, just as we stumble upon the Stolpersteine when we walk the streets of Berlin.

The Anatomy of Murder is a careful dissection of a slice of medical history. It also prompts a meditation on medicine’s privileged status as an institution and its close relationship with structures of power and oppression. The crimes of Nazi anatomists are not unique; they are echoed by medicine’s many abuses, which often lie at the intersection of the pursuit and application of medical knowledge and the state’s drive for control over people’s lives. The Anatomy of Murder trips us up with that idea. And it’s a good thing it does.

Samuel Freeman, MD is a pediatrician, writer, and host of the “Practicing” podcast. He was a finalist for the Missouri Review’s 2022 Perkoff Prize for nonfiction writing on health and medicine. He lives in Montreal.

* A previous version of this review inaccurately mentioned allegations that Hermann Stieve worked with authorities to time executions based on inmates’ menstrual cycles.