This article uses a sensory approach to trace the attachment of concepts of health in relation to the scent of pine trees, and how that has been perceived as signaling particular health properties in different spaces—namely the forest, the tuberculosis sanatoria and the home—over the last two centuries. By tracing the use of pine as a scent geographically located in the nineteenth century forest, to one prevalent in the modern-day home, we can see how the cultural and historic context for how the associations of nature ‘out there’ with health have become attached to symbols of nature ‘in here’. Although we can argue that the scent of pine in the home may now be predominately artificial and the forest itself is absent, a strong connection remains with historical concepts that associate pine odour with health and cleanliness.

Although the emphasis here will be on meanings of pine from the mid-nineteenth century onwards, it is worth noting that there is a longer history of valuing such trees for their effect on the body, particularly for lung conditions. As the British Medical Journal reporte­d in 1908, when tracing the history of open-air treatments there was nothing new in the idea itself, stating ‘Pliny the Elder speaks of the beneficial effects of sunlight and air charged with the scent of pine forests in consumption’ and that other early medical writers such as Galen and Avicenna advised patients with lung conditions to live at high altitudes (Editorial 1908, 403).

Geography, as well as medical conceptions, no doubt played an important role in what rural settings were seen as the most therapeutic for tubercular patients. The influence of Germany as a pioneer of sanatorium treatment for tuberculosis led to mountainous and forested locations becoming seen as the ideal place for sanatoria. As it provided the model for what became the common ‘open-air’ approach for chronic diseases by the turn of the century, it also exported the concept of pine forests as an ideal feature for sanatoria landscapes. As countries such as Britain took up these open-air therapies (including the treatment of diseases such as tuberculosis by spending as much time outside as possible for fresh air and light therapy), they also borrowed the concept of therapeutic pine infused air.

By the late nineteenth century, chemists and doctors were exploring the idea that pine had inherent disinfectant and antiseptic properties. This was not only seen as valuable in treating disease in the infected body but also as a key ingredient disinfectant for surfaces, particularly within buildings such as hospitals. The forest was, therefore, brought inside to purify the indoor air and surfaces, while sanatoria themselves were built in wooded areas such as pine forests (or pine trees were planted) for the benefit of patients who would sit and walk through the gardens and surrounding landscapes as part of the therapeutic regime.

During the twentieth century there was increasingly a move away from a belief in the curative nature of the forest itself and a greater interest in the products it produced, including their potential use within the home rather than the sanatorium. At the same time there was also re-orientation back to the home as a key site of medical care – something which had been common before the nineteenth century. Based on Graham Mooney’s argument that ‘the regime of home treatment replicated as far as possible that of the sanatorium’, it is perhaps not surprising that pine disinfectant, previously used in medical settings also moved into the home (Mooney 2015, 166).

This relationship can be seen in detail by exploring the company, Sanitas, where as early as 1879 they were advertising their disinfectant product range as ‘The Health Giver; Or, the Pine Forest at Home’. The advertisements merged the scientific idea of disinfectant with the concept of bringing the forest fragrance indoors, which suggests that there were commercial opportunities in appealing to both these elements, particularly when targeting women as defenders of the healthy home.

It is this use of pine in household disinfectant and cleaners such as Toilet Duck, Dettol and Pine-Sol, which has lasted in relation to domestic cleaning practice, and the one that is meant to signal hygiene when we smell it, even if it is now only a synthetic additive. Advertisers throughout the period have played on this idea of the healthy forest in the home and there is clearly still an underlying association with pine as ‘clean’ and ‘healthy’, even though the product itself may not contain any actual pine. The continued use of pine in cleaners suggests that it has remained an indicator of cleanliness and still considered to smell ‘good’, even if it is gradually being usurped by other smells or even products that promise not to smell at all. From a physical embodied relationship created by moving through and being situated within the forest, pine is now generally signified in a bathroom scent that briefly lingers in the air.

This breaking down of large environmental ecosystems into synthetic representations, which still retain some memory or meaning is both part of modernity and embedded in our twenty-first century lives. It is, therefore, important to recognize, this as well as the role of personal memory, if we are to appreciate what is culturally shared and/or different in the places we construct. Tracing the history of pine scent thus gives us an insight into the breakdown of environmental features into their constituent parts as part of the process of becoming modern, and the move of pine as a therapeutic agent via the institution to the home. However, despite this industrialization of nature which is mirrored by the microscopic understanding of bodies and disease agents into ever smaller parts, cultural connections remain. The forest is still represented in our associations and emotions and thereby retains more meaning than a mere sniff from a bottle would suggest.

Read the full article on the Medical Humanities website. 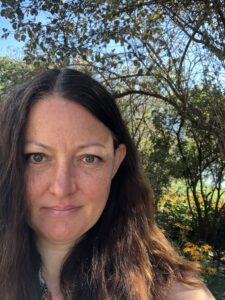 Clare Hickman is a Senior Lecturer in History at Newcastle University working on the intersection of environmental and medical history. She currently leads the Wellcome Trust funded ‘MedEnv: Intersections in Medical and Environmental Humanities’ network and the AHRC funded ‘Unlocking Landscapes Network: History, Culture and Sensory Diversity in Landscape Use and Decision Making’. Clare is also Co-Investigator on the AHRC funded project, ‘In All Our Footsteps: Tracking, Mapping & Experiencing Rights of Way in Post-War Britain’ and the NERC funded Connected Treescapes project. Clare’s latest book is The Doctor’s Garden: Medicine, Science, and Horticulture in Britain (Yale UP, 2021). Her staff profile can be found at the Newcastle University website.