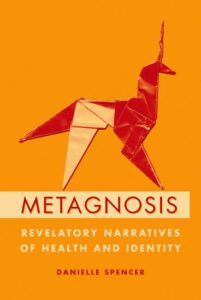 Danielle Spencer’s Metagnosis: Revelatory Narratives of Health and Identity (2021) is the strong jet stream that shudders the “biopathological” (8) gaze compelling us to “locate the pathology—in ourselves” (xi). Her research draws inspiration from David Byrne’s coping mechanisms of apprehending Asperger’s syndrome (Spencer had worked as Byrne’s Art Director). Spencer’s œuvre enables the patient to make and challenge medical knowledge through the nonce word, metagnosis. The layers of the meanings of this term cannot be scrunched up in a single sentence. However, its definition could involve a three-step process: (1) the knowledge of one’s chronic condition of which the afflicted has remained unaware for a long time, (2) the adaptation to the knowledge of that condition, and (3) recognising oneself with the transformed identity engendered as a result of the knowledge of the unknown chronic condition.

The book is divided into four parts, following the trajectory of the Greek tragedy, commencing with the exposition, leading to the climax, anagnorisis, and finally dénouement. Part I introduces the eponymous neologism, as an “autological” event necessitating “readerly/writerly diagnosis” (10), thereby, explicating “a shift in our understanding of disease or of identity itself” (3). Drawing on the erstwhile U.S. Secretary of Defense Donald Rumsfeld’s model similar to the Johari window (designed by Joseph Luft and Harrington Ingham), this section demonstrates the transition from the “unknown unknown” to “unknown known” (7) as autological. Part I divulges the catalysation of interdisciplinary lens of narrative medicine and narrative attentiveness for diagnosing metagnosis, interpreting metaphors delineating Spencer’s subjective “lived material experience” (25) and the oral case histories. Spencer’s approach critiques the exclusivity of the esoteric medico-scientific discourse that fails to perceive the clinical caregivers as clinical care-recipients. This section ratifies how a writerly multidisciplinary, collaborative text, can facilitate a “polyphonic hybrid” (45) dialogue between the patient and the doctor (even if they are the same person). However, it fails to address the role of the informal caregivers in the wake of metagnosis.

Part II leads the readers to the theatrical rising action by introducing the critical dialogue between the pathographies and sociological critique of Cynthia Freeland (philosopher), Art Spiegelman (cartoonist), Sue Barry (neurologist), Knut Nordby (psychophysicist), Temple Grandin (animal scientist), Oliver Sacks (neurologist), and Arthur Frank (sociologist) to highlight how society’s stereotypical vision pushes the patient (who lacks stereovision) into a dilemma. This interaction between the narrative and the critical elements gives the effect of the chorus apportioning their critical commentary to the narrators that are facilitated to speak in this section.

Part II, along with citing the artistic, sociological, medical, and literary instances of metagnosis, presents Spencer’s struggle to convince her friend of her own diagnosis of strabismus. She foregrounds her experience of vulnerability by divulging her discussion with a surgeon() who represents himself as the author of a detective story following the revelation and concealment of the prognosis and shouldering the accountability on the disability, thereby, safeguarding his “guild” (104). Through these conversations, Spencer highlights the unbelievability of her narrative of disability, as there was no visible wound to justify her experience of hemi-vision. Spencer’s friend was apparently looking for the cause-effect relationship in the narrative: for them, the effect of the lack of stereovision must have a cause like physical injury. This friendly exchange leads the readers to the sufferer’s dilemma: whether to be comfortable with the sight they possess or undergo corrective surgery to align their stereovision with that society’s stereotypical vision. In this context, the insightful snippets of Spencer’s conversation with Gordon Dutton, “a Scottish ophthalmologist and vision scientist” (140) shed light on the difference between rehabilitation and “habilitation” (14). Rehabilitation is when the patient knows about their medical condition and strives for the restitution, while habilitation is simply learning about the disability in order to adapt to it. Metagnosis, as a project, doesn’t promote or discourage corrective medical surgeries. On the contrary, it encourages the suffering individuals to take the decision regarding corrective surgeries that would benefit them regardless of how society would perceive them. Metagnosis’s unique contribution lies in compiling the voices of the patients along with the author’s (who also undergoes the surgery for correcting stereovision) to realise the depth of vision with which they are comfortable for perceiving their environment.

Part III employs the metaphor of “‘tomato in the mirror’” (176) to examine the phase of self-realization and demonstrate metagnosis as a descendant of “anagnorisis” (176) that aids the individuals to know if they are passing as transformed, citing pertinent excerpts from Blade Runner (1982), “Sophocles’s Oedipus” (178), and Gattaca (1997) among others. It follows the route of inversion, subversion, and “renegotiation of the ontological balance between biological impairment and socially constructed disability…” (234), through the various models of identity (diseased, ill, and sick) designed by Andrew Twaddle, Arthur Kleinman, Bjørn Hofmann, Christopher Boorse, and Marc Ereshefsky. Metagnosis ruptures this dichotomy of being ill and having illness by looking at the referential, pragmatic, and relational signs that help the patient renegotiate their identity in “a Thirdspace” that interrogates “social disparities and modes of subjugation” (252). This part is about identifying with the identity that emerges as a result of metagnosis.

Part IV presents to the readers the narratives of David Finch, John Elder Robison, Q, Oliver Sacks, Feynman, etc. (287), to demonstrate real life narratives of metagnostic moments that ruptured the life of the individuals who were ignorant of their ability to perceive differently. Germane to the ongoing discussion on the knowledge and ignorance of perceiving differently (the self in the context of others), this analysis weaves the aspects of metafiction and metareferentiality to interpret metagnosis as an event that fissures the stereotypical binaries of ability/disability and cognizant/nescient. The last section could have elaborated Derrida’s idea of pharmakon, mentioned quite earlier in the book, to accentuate the argument that just like pharmakon the knowledge of one’s previously unknown chronic medical condition could prove to be either beneficial or traumatizing. This knowledge could either encourage the afflicted individuals to accept and identify themselves with their altered identity or cause them emotional and psychosocial wounds. Similar to the trajectory of Greek tragedy wherein the protagonist dies during the dénouement, the last part showcases narratives wherein metagnosis causes the death of the old identity of the individuals with chronic afflictions who are ignorant about it. However, unlike Greek tragedy the story of metagnosis doesn’t end there. In fact, it begins there and leads to the acceptance and identification of the transformed identity.

This book can be useful to the researchers interested in the aspects of medical humanities like making medical knowledge, patient’s agency, disability studies, identity studies, and narrative medicine.

Swati Joshi is a doctoral candidate studying medical humanities at the Indian Institute of Technology Gandhinagar. Her research has been published in Synapsis, Medical Humanities, Sanglap, and Victoriographies.