Recently, JAMA’s Clinical Reviews podcast recorded an episode with the Twitter headline: No physician is racist, so how can there be structural racism in health care? The tweet is now deleted, and JAMA has since issued an apology for it, and for the podcast, but not before historians of medicine uttered a collective “what now?”

The podcast begins with the host, Ed Livingston, claiming that since he came of age in the 1960s, he doesn’t understand how medicine could be racist, or that structural racism is embedded in society. The ensuing conversation with Dr. Mitch Katz, the President and CEO of New York City Health+Hospitals, attempts to describe and situate structural racism in medicine, but Livingston, in particular, spends most of the episode denying that racism exists because it is now “illegal.” He also openly voices his discomfort with using the word “racism” to describe white supremacy in medicine. Nor do Katz and Livingston ever clearly delineate how, even though racial disparities in health are shaped by structural factors, American healthcare practitioners themselves have played a pivotal role for centuries in creating, justifying and naturalizing these disparities. 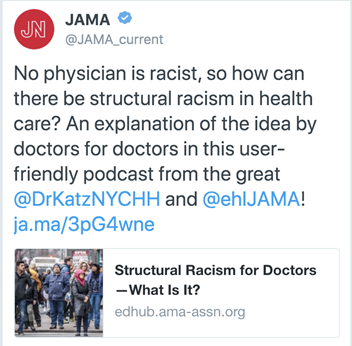 As historians of medicine know well, American medicine is built on racist and paternalistic ideas, something that the current field has not grappled with sufficiently. Indeed, the Journal of the American Medical Association and its parent organization, the American Medical Association, has a long history of publishing racist articles and advancing healthcare policies steeped in white supremacy. It also refused membership to African American physicians until the 1960s. Those of us who study histories of medicine, disease, and healthcare are familiar with the ways in which white, male physicians sought to professionalize their position in society via deliberate policies of exclusion beginning in the early nineteenth century.

In some ways, the (white) doctors talking to themselves on this podcast episode have proved their own point: the individual racism of individual physicians (and other health care providers) can combine to CREATE and reproduce structural racism. This is as true today as it was in the past. Although ethics and implicit bias trainings endeavor to illustrate historical wrongs, the lessons from Nuremberg and Tuskegee waft past on a screen more as relics of the past—the things “we” don’t do anymore—rather than lessons needed to address the problems of racism in healthcare today. But doctors and other health care providers wrap themselves in white coats that symbolise their white saviour complex, swear an oath to do no harm, cleaving to the latest evidence that affirms their own unscientific belief that race is biologically ordained. And so nothing ever changes.

But this is what physicians need to know about their own history: Not only can physicians be racist, physicians were often the very architects of racial science and scientific racism. This includes physicians who purported to be allies of African Americans. Some most certainly trafficked in ideas that minimized black suffering and reified the idea that innate racial differences between Blacks and whites existed. Benjamin Rush, who opposed slavery, was nevertheless complicit in a kind of anti-blackness in his understanding of experiences with disease (yellow fever) and ability to withstand pain. Antebellum physician Samuel Cartwright constructed categories to pathologize Black resistance to enslavement, and medical schools from the Ivy League to the Deep South taught curricula that naturalized white supremacy.

This trend continued through the twentieth century. Physicians were virulent eugenicists and formed academic and institutional eugenics organizations whose damaging impacts are still felt today in healthcare. Physicians accepted and supported the segregation of medical facilities and the medical profession. Physicians were not only members, but leaders in the Ku Klux Klan in the 1920s, lending the organization’s racism a veneer of scientific and medical legitimacy. Physicians experimented on African Americans without their knowledge or consent. Physicians sterilized African American, Latinx, and Indigenous women against their will and advocated for birth control mostly on the basis of restricting the births of the “unfit.” American medicine today hasn’t provided the solutions to structural racism, as the podcast suggests—instead, it created it.

Without a deep interrogation of this racist history, medicine will remain incapable of joining the dots between history, medical education and current disparities in health care. Recently both the APA and the AMA released statements expressing contrition for their past actions which have contributed to structural racism. But, like all non-apology apologies, neither statement specified how this had happened, or what they were doing to change it. It’s as if the act of saying sorry magically wishes it away. In many ways, a history of apologies without reform has had the effect of hiding the racist origins of U.S. medicine, from the founding of medical schools to hospitals. Further, the racist origins of American medicine has shaped the treatment and care of patients today. Giving just a few examples, studies have shown that medical students and doctors often retain false beliefs about pain tolerance and skin thickness, while we know that Black and Hispanic patients are less likely to receive adequate pain medication for bone fractures.1 Black and indigenous maternal health is at a major crisis point as well, with women from these groups two to three times more likely to die from pregnancy-related causes.

Medicine, broadly construed, is a white supremacist system. It has always privileged the white body and white knowledge, as norms. The belief that scientific evidence is objective, or that physicians can categorically “do no harm” because they swore an oath, often works to obscure or cloak this racism. Professional organizations hold and wield the kind of power that can affect and lobby for structural changes within medicine that are anti-racist; or, more holistically, anti-oppressive. In its recent apology, the AMA stated that it would be “looking inward to unearth our own institutional policies and practices which may have exacerbated inequalities”. This requires an honest engagement with the profession’s own history, and with the attitudes of its members, who can be, and often are, egregiously racist.