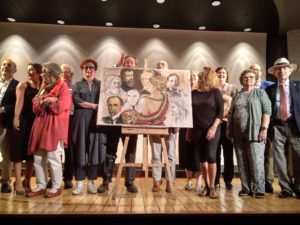 The first ‘The Doctor as a Humanist’ (DASH) symposium was held in Palma de Mallorca, Spain on the 13th-14th October 2017.The Symposium was the result of the cooperation among faculty from five European and American universities: Sechenov (Moscow), Pompeu Fabra (Barcelona), Queen’s University Belfast, University of the Balearic Islands (UIB), and Johns Hopkins University (Baltimore), and was hosted by the Scientific Foundation of the Medical Council of the  Balearic Islands at the Royal Academy of Medicine, Balearic Islands and held under the auspices of the organising committee. The first DASH Symposium 2017 was opened with the subtitle ‘Can the Humanities Transform 21st Century Medicine?’.

A number of international participants took part in this year’s Symposium. These included an expert Committee, international students and practising doctors. The symposium brought together experts in the medical humanities and medical education from around the world (UK, Spain, Russia, Brazil, India, USA, and Canada) along with medical students from the participating universities. One of the main goals of the symposium, which is embedded in a wider pedagogic project, is to start up an International Association which, among other things, wishes to develop ways to introduce the humanities into the medical curriculum and practice.

The event also  aimed to facilitate collaboration between medical schools as well as encourage multi-disciplinary and multi-sectoral cooperation. This was achieved not only through the symposium proceedings, but also by the good attendance and incredible ambience at the different social events, which included a welcome reception, working lunches and cultural activity.

The program was divided into three main sections including: Literature and Medicine, Arts and Medicine, Medical Education and Humanities, and the event was officially opened by Jonathan McFarland with the words, ‘My aim, and that of all those who have supported me from the beginning, is that this symposium will begin to put the “heart and soul” back into medicine, and place the foundation stone for a global, multicultural collaboration that aims to put the humanistic back on equal footing with the scientific.’

The first section, Medical Education and Humanities was chaired by Professor Joaquim Gea from Pompeu Fabra University who stated that ‘in the doctor-patient relationship two different languages are used – the language of medicine and the language of emotions, so that medical educators have to teach young doctors to use them both.’ Four interesting and intriguing speeches were given: Professor Wendy Reid spoke on ‘The state of medical education in England; can Humanities help?’, Professor Trevor Gibbs on ‘From Learning to practice: the importance of effective evaluation’,  and Professor Manuel Pera on ‘The human viewpoint as a teaching tool to counterbalance the technological excess in the training of future physicians. A positive experience’, who closed his talk with a poem from TS Eliot, ‘The Hollow Men’:

Between the idea
And the reality
Between the motion
And the act
Falls the Shadow.
Life is very
Long.

The last speaker, Dr Lester Liao, summed up the section with the idea that ‘the disenchantment of medicine is the consequence of the loss of the appreciation for what humanities are doing.’

The following section, Arts and Medicine, was chaired by Annalisa Manca. The leading idea in these series of interventions was that ‘Patients need wisdom and wisdom comes from introducing the humanities into medicine.’ Three thought-provoking speakers elaborated on this tenet and gave naturally curious answers to the dozens of questions that medicine gives us to think over.

Professor Tim Dornan from Queen’s University Belfast questioned the tendency of medical education to be ‘obsessed with the curriculum’ and quoted Einstein saying that ‘not everything that counts can be counted and not everything that is counted counts’. He added: ‘Music is intrinsic to the human brain … it can cure one’s emotional blindness’. While Assoc. Professor Margaret Chisolm from Johns Hopkins University, Baltimore, gave a presentation on ‘Bedside Education in the Art of Medicine’, in which she discussed her new app: ‘BEAM is an arts-based mobile app designed to promote reflection among learners on a patient’s human experience of illness. It shines a light on what it means to be human for both patients and doctors.’

To conclude, Professor Hedy. S. Wald of Warren Alpert Medical School of Brown University, Providence gave a talk entitled, ‘Reflection, Resilience, Humanism’ in which she said, ‘Reflection on being means training the mind and heart through writing. … When a patient is ill the story helps them to understand and interpret their current experience — it also helps us to avoid burning out. … Guided reflective writing covers all the aspects of humanities.’

The second day of the DASH Symposium took a different, more collaborative approach. There was only one plenary speaker, with the onus primarily being on ‘working together’ to digest and elaborate the intense series of ideas posed during the first day.  Professor Marcos Nadal (UIB), a psychologist interested in neuro-psychology, gave a fascinating presentation entitled ‘Reconciling Humanities and Science: the impact of design features on emotion, behaviour and physiology’, which led onto the collaborative group work. During this section, the participants elaborated on the ruling question of the symposium: ‘Can the Humanities transform 21st Century Medicine?’ using the themes that had emerged from the previous day’s sessions as the basis for the discussion topics. To some extent, the group discussion among plenary speakers, students, and symposium attendees, aimed at leading the direction of the future ‘The Doctor as a Humanist Project’.  During the day, an Artist-in-Residence, Sandra Renzi, worked on a painting which reflects the ideals of the symposium and the association. The painting portrays Hygieia, the ancient goddess of medicine, painting the portraits of Hippocrates, Vesalius, Avicenna, William Harvey, Anton Chekhov, William Osler and Gregorio Marañon. 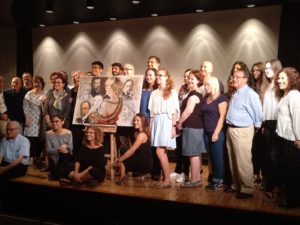 After the presentation of the group discussion results, the draft guiding principles for the newly formed ‘The Doctor as a Humanist’ Association were proclaimed:

Vision: Improve the practice of medicine worldwide by promoting the humanities in healthcare.

Mission: The Doctor as a Humanist is an international group which fosters humanistic values in medical practice through promoting dialogue between humanities and biomedical sciences.

The Organising Committee ended the meeting with opinions and take-home messages.

Jonathan McFarland concluded, ‘Thanks to all for helping to make this dream come true; the “star is officially dancing” — but never forget that this is just the beginning!’