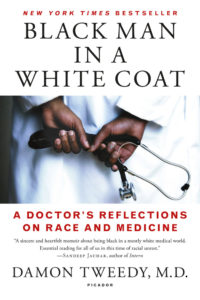 The White Coat Ceremony is a common rite of passage in American medical schools that is intended to welcome physicians-in-training into the institution of medicine. The white coat is meant to signify professionalism and trust with patients and the ceremony is a time to emphasize this. With students and physicians alike clad in their white coats (albeit coats of different lengths), the message is clear: In the practice of medicine, we are all equal.

However, once the glow of the ceremony has waned, and the white coats are shed—revealing the black and brown and white bodies underneath—the question remains: Are all physicians and, more importantly, all patients, treated equally?

In his memoir, Black Man in a White Coat: A Doctor’s Reflections on Race and Medicine, Dr. Damon Tweedy addresses this question through an examination of race and its interactions with medicine at all levels of his medical training. His goal for Black Man in a White Coat was to ‘paint a fuller picture of the experiences of black patients, as well as that of the black doctors who navigate between the black community and the predominately white medical world’ (7).

Though Black Man in a White Coat focuses primarily on Dr. Tweedy’s thoughts and reflections on his medical training, he is far from the book’s only source. Drawing from other memoirs, history books, public health studies, and various other resources, Tweedy weaves a complex tapestry of information in support of his observations. This is most prominent in Part 1: Disparities, which includes the first four chapters of the book.

Chapter 1, ‘People Like Us’ explores Dr. Tweedy’s experiences with the tensions of being a black medical student and recipient of a diversity scholarship to Duke University School of Medicine. In Chapter 2, ‘Baby Mamas,’ Tweedy explores the complex interactions of health disparities though the stories of black mothers Tweedy met as a second-year medical student. Chapters 3 (‘Charity Care’) and 4 (‘Inner-City Blues’) document the socioeconomic challenges of access to health insurance and health education that patients faced during Dr. Tweedy’s time at a rural community health clinic and an inner-city emergency department.

The most compelling section of the memoir is Part II: Barriers, in which Tweedy shifts the focus of the memoir from the role of race on people’s health to the role of race in the practice of medicine. He recounts his experiences during his internship year through the lens of dealing with prejudiced patients (Chapter 5, ‘Confronting Hate’), prejudiced doctors (Chapter 6, ‘When Doctors Discriminate’), and prejudice against the LGBTQ community (Chapter 7, ‘The Color of HIV/AIDS’).

It is notable that Tweedy keeps as levelheaded as one can in retelling very emotionally-charged experiences in this section, perhaps so as to not appear insecure about race (63) or to not disrupt the status quo (147). However, this levelheadedness, while admirable, could be read as a form of silencing, an unconscious but learned behavior indicative of the institutional racism to which Tweedy draws the reader’s attention throughout his memoir. With this reading, one might conclude that though Tweedy is well aware of the systemic pressures affecting communities of color and points them out throughout the memoir, he himself may still be affected by them.

Part III: Perseverance documents Dr. Tweedy’s experiences as a practicing psychiatrist. In Chapter 8, ‘Matching,’ Tweedy describes his interactions with a black patient for whom it made a difference that he, too, was black. Chapters 9 (‘Doing the Right Thing’) and 10 (‘Beyond Race’) talk about counseling patients and making good choices as equitably as possible within the American healthcare system.

One of the most fascinating aspects of this memoir is Tweedy’s unflinching honesty and fierce introspection. Though it might have been easier to write a book that focused primarily on the patients he had helped or the interesting cases he had seen, Tweedy instead allows the reader to experience his struggles with the decidedly unflattering, yet honest, process of self-reflection. For example, upon encountering and making assumptions about a man on the street, Tweedy writes, ‘Was it my medical training that caused me to see him as a list of potential health problems rather than as an individual? Or was it the many ways in which I’d been indoctrinated by both black and white people, throughout my life, to see poor blacks as inferior and susceptible to so many problems? My reaction troubled me’ (99). Later, Tweedy again acknowledges his own biases about his patients: ‘Based on previous patients of similar style and background whom I had encountered, as well as my innate biases, I made several negative assumptions about him…’ (240-241). However, the real value in Tweedy’s intimate self-reflections is not necessarily the uncomfortable realizations themselves, though it is refreshing to see them expressed so honestly. Rather, the value is in the lessons he takes from these thoughts and shares with the reader. For example, immediately after he writes about his assumptions based on previous patients, Tweedy concludes, ‘In short, I looked at him in the same derogatory way that doctors so often unfairly approach black patients’ (241). Tweedy draws from his experiences and his self-reflections and uses this perspective in order to help others be better caregivers. Tweedy ultimately addresses his readers with an exhortation, based on his experiences: ‘A big part of the solution is discarding your assumptions and connecting with each patient as a person’ (245).

Black Man in a White Coat fills an important gap in the conversation about race within medicine. Tweedy pushes this discussion further, however, by exemplifying intersectionality, the concept that ‘race, class, gender, sexuality, ethnicity, nation, ability, and age operate not as unitary, mutually exclusive entities, but as reciprocally constructing phenomena that in turn shape complex social inequalities’ (Collins, 2).

Tweedy speaks to this idea throughout his memoir as he struggles with the tensions of different identities. One particular anecdote illustrates this well: In Chapter 6, Tweedy describes an interaction in which he went to an urgent care clinic for his own knee pain, and the physician who saw him did not examine his knee until Tweedy revealed that he, too, was a physician. Tweedy writes, ‘I couldn’t get out of my mind how I’d been treated as two entirely different patients. Damon Tweedy, the unknown black man, dressed like he was about to mow the lawn, couldn’t get the doctor to look him in the eye or touch him; Damon Tweedy, M.D. was worthy of personal, first-class service’ (150). Here, Tweedy ruminates on the idea that his identity as a black man was mitigated by his identity as a physician, as well as the idea that his health might have been affected because of this. In acknowledging the complex interactions of several parts of his identity, Tweedy nuances the discussion about race and medicine; instead of race and medicine intersecting at one discrete point, they are deeply and intricately enmeshed.

Black Man in a White Coat reflects qualities that I personally would want in a physician; it is well-researched, engaging, emotionally honest, and introspective. If Tweedy’s memoir was intended to prompt a conversation about the interactions between race and medicine, how might we as current and future caregivers ensure that this dialogue continues? Because it is especially relevant to my identity as a medical student, my colleagues and I have posited one way for teaching racial justice in medical school curricula through narrative medicine. Others have asserted that the use of race in medicine reflects the complicated history of race in the United States. However, if we are to engage in meaningful dialogue about race and how it impacts medicine, we would be wise to take a page from Dr. Tweedy’s book and reflect.