This blog post comes from Dr Lisa Shaw, Reader in Brazilian Studies at the University of Liverpool. She is author of Popular Cinema in Brazil (Manchester UP, 2004) and Brazilian National Cinema (Routledge, 2007), both with Stephanie Dennison, and The Social History of Brazilian Samba (Ashgate, 1999) and Carmen Miranda (BFI-Palgrave Macmillan). She appears in the BBC4 documentary Carmen Miranda: Under the Tutti Frutti Hat, and in 2011 was awarded a Leverhulme/British Academy Senior Research Fellowship to write the monograph Tropical Travels: Brazilian Popular Performance, Transnational Encounters and the Construction of Race (Texas UP, due 2018). 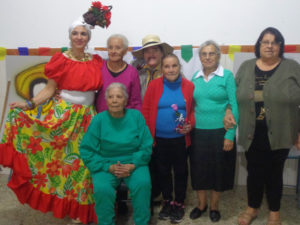 As a Reader in Brazilian Studies at the University of Liverpool, with research interests in the popular musical film tradition known as the chanchada, which dominated film production in Brazil in the 1950s, I have become increasingly aware of the power of a combination of visual spectacle and musical soundtrack in sparking reminiscences among older audiences. During my research for the monograph Carmen Miranda (British Film Institute/Palgrave Macmillan, 2013), I was also struck by the numbers of elderly fans of the star who were keen to tell me about the therapeutic value of watching one of her 1940s or 1950s films on DVD today. I am now involved in a research project to identify the specific triggers of musical comedy films – whether spectacle, songs, humour, recognisable locations or stars – for both memory stimulation and an enhanced sense of emotional wellbeing among the over-65s, and intend to expand this to embrace those living with dementia.

As part of this project, in 2014-15 I carried out a pilot study in the city of Petrópolis, Rio de Janeiro state, Brazil, entitled “Cinema, Memory and Well-being”, in collaboration with a local GP, Dr Leonardo Anesio and his team of community health workers at the Fazenda Inglesa Family Health Practice, which caters predominantly to an underprivileged, socially-excluded population. Together we organised film events for some 80 invited local inhabitants, aged over 65, screening selected short clips from a range of chanchada musical comedy films, including a mixture of musical and dance sequences, location shots and comic dialogue sequences featuring famous stars from the 1950s. Following each clip, lasting no more than five minutes, I posed open questions to the audience, to stimulate responses and interaction between them, also prompted by the community health workers dotted around the audience. Dr Anesio recorded the audience’s verbal interactions and comments on video, as well as recording other physical reactions, such as smiling and laughter, singing, and movement to the music. The audience also participated in other ludic activities, such as having their photographs taken ‘dressed’ as a famous star. 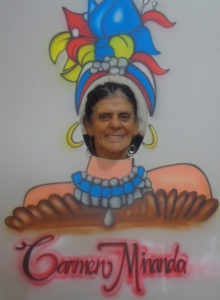 All participants subsequently filled in questionnaires and were invited to provide additional feedback. The following comments, among many others in a similar vein, were made: ‘Sensational! I felt like I travelled through time’; ‘Having this experience with my neighbours, and feeling that they were also carried away by the emotion of their memories, left me very happy’; ‘Afterwards I felt much better and more lively’; ‘This gives older people encouragement to overcome certain things’; ‘It reawakened my emotional memory of a distant past’; ‘A benefit was that it distracted me, making me forget the problems at home.’ An unexpected benefit was the positive impact on the community health workers, whose profession is notoriously undervalued: ‘The event made me more motivated about my job. It gave us more ideas. We’re now thinking of other events to do this year, and the team morale as a whole improved a lot’; ‘I was very happy with the participation of the entire team, our coming together was gratifying.’

Dr Anesio added: ‘We know that it is very common for older people to talk about the past, saying “in my day” or “in my youth” it was like this or that, for example. Screening films from an earlier era embraces such discourse, instead of prejudicially viewing it as outdated and fossilised. We are therefore meeting the need of older people to talk about their experiences and establish contact with their historical identity rather than our tendency to withhold their past.’ Since then he and I have worked together on devising a ‘best practice toolkit’ for organising similar events, which has received the backing of the Municipal Council for the Defence of the Rights of Elderly People, Petrópolis City Council, and is being adopted for regular use in a large care home in the city. An English-language version has also been produced for use in care homes in the Liverpool area, where the project has been piloted in a BUPA and an MHA care home.