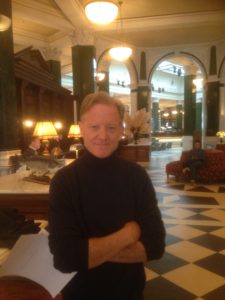 Activism is defined as ‘efforts to promote or direct social, political, economic and/or environmental reform to make improvements in society’. James Redford, documentary filmmaker, producer, and humanitarian uses documentary filmmaking to truly earn the title of a ‘film activist’. I met him in London in May 2017 where he was promoting his latest documentary Resilience: The Biology of Stress and the Science of Hope.

Reflecting on his inspirations for the film, James explains: ‘Resilience contains disturbing information about the adverse health effects of difficult childhood experiences. If I had not encountered something we can do to offset those experiences, I would not have made that film. I would be only displaying the medical basis for bad news. We must understand the biological risks for children exposed to emotional, physical and sexual abuse, neglect, violence or mental illness in their homes.  However, if you provide that child with even one caring, responsible, consistent adult who shows them what it means to be in a loyal, stable relationship with an adult – such as a religious leader, an extended family member, an educator, a social worker, a volunteer, or a police officer with the right training – you can minimize the toxic effects of a bad environment. And that applies globally; qualities of love, compassion, care and connectivity are universal.  In the fall of 2016, I visited The Navaho Nation, an indigenous Native American nation within the USA; I observed how their religious and cultural values reduce the risk of ill health attributed to centuries of oppression and genocide.  In their religion there is an appreciation of healing through family and community gatherings and rituals that supports the mental health of the individual. Chanting religious traditions can have the same healing effect as someone with training in care and compassion. I also showed the film in Columbia, Kazakhstan, New Zealand and now in the UK, and every time I am amazed by the overwhelmingly positive reception due to its universal message’.

When I asked Mr Redford about the conception of Resilience, he stated: ‘The story began in 2012 when I made another film, The Big Picture: Rethinking Dyslexia, in collaboration with Karen Pritzker, a notable philanthropist in the USA who supports many social causes.

Karen was working with educationalists on how to support children with dyslexia but had also known about the little-known Adverse Childhood Experiences (ACES) Theory. The science was there for 15 years, but not widely known. I read the study after she sent it to me, and along with her daughter, producer Dana Schwartz, decided to make the film. The first film we made addressing the ACEs study was Paper Tigers.

It was based on the true story of a high school principal in Walla Walla Washington who employs creative methods in supporting troubled children using the principles of ACES. A year spent at the school with the at-risk teens reveals just how far patience and compassion can go in setting kids on a healthier course.’

James Redford’s interest in using film to explore important medical issues has a personal dimension. After a childhood autoimmune illness caused liver failure, James received two liver transplants in 1993. That experience led him to making The Kindness of Strangers, an interwoven story of real-life organ donors and transplant recipients. James (who prefers to be called Jamie) reflects on his self-discovery journey in hospital wards: ‘I had to go through a lot of mental and psychological tests before the transplant operation. I came to know that having the support of close family relationships was shown to reduce failure rates in transplants. That was my first realization that there is a link between what was happening in someone’s immediate family environment and its effect on someone’s physical health. In America, in the 90s, there was a myth that transplantation medicine was a mysterious world where dark things happen, people were kidnapped, and organs were taken without their consent. I acknowledge that there are black markets for organ donation, but at the same time there is also altruism in its purest form: families who, at the time of losing a loved one, find it in themselves to consent to donate the organs of that deceased loved one. I believe that human beings have it in themselves to do beautiful, charitable things. I am alive because of it. The Kindness of Strangers was embraced by doctors, health care professionals, social workers and recognized organizations. Surviving that personal journey of illness, and recovery was the inception of the James Redford Institute for Transplant Awareness.’

The Big Picture: Rethinking Dyslexia film was another story anchored in James’ personal experience. ‘My son Dylan, who is now a successful artist at 25, was diagnosed with dyslexia at a young age – he was struggling at school as his handwriting and reading did not reflect his intellect or intelligence, so he was often labelled as lazy. Luckily my wife, a life-long educator, knew how to secure the right help for him. Karen Pritzker’s daughter, Allison Schwart, is also dyslexic, and both she and Dylan agreed to discuss on camera how and where to get support and which techniques are most helpful. Assistive technology such as dragon speech, speech recognition software, and autocorrect are terrific and now widely available. Dyslexia is not a moral or character flaw- science proves that underlying anatomical brain differences are the reason for the symptoms of dyslexia. It is important to disseminate these films and show them widely in schools.’

James’ work also reveals a passion for environmental issues. ‘I grew up in a home with parents who were active environmentalists. My father, actor/director/producer Robert Redford, has been a passionate advocate for environmental protection for over five decades. After the box-office success of Butch Cassidy and the Sundance Kid my parents bought a small family resort in the Rocky Mountains of Utah to protect the land from being developed into condominium units. At the time the land had been overgrazed by sheep and the native predators – wolf, coyote, and mountain lion – had been poisoned off the land. Under the protection of my parents, the natural landscape recovered to its original glory. I produced HBO’s Mann V. Ford, a documentary that chronicles a Native American community that was poisoned by the paint waste from the Ford Motor Company. I also directed HBO’s Toxic Hot Seat, a film that looks at the efforts of the United States chemical industry to hide the health risk of chemical flame retardants.’

In order to honor my father’s environmental legacy and to pursue my own, the two of us founded The Redford Centre, a non-profit environmental media company that has been active for 10 years now in accelerating better and healthier environments for all.

In partnership with the Redford Center, I am now completing HBO’s Happening: a Clean Energy Revolution. President Trump’s decision to break our nation’s promise to support the Paris Climate Accord in no way reflects what is happening in America with clean energy. The clean energy economy is booming at the same rate of growth we saw with radio, TV, and the Internet, and I’m hoping that the film will do its part to accelerate that growth even further. With climate change, every second counts.’

Jamie summarizes his mission eloquently: ‘My films and stories discuss problems as well as offer solutions. Through my company KPJR films and The Redford Center, I have the privilege of offering hope and solutions to some of our most vexing social, environmental, and health challenges. Through film we can bring about change, we can fix things – or at least try to do them better.’