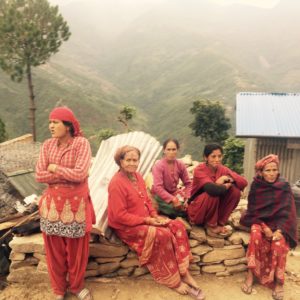 Dr Ayesha Ahmad, Global Health Humanities Editor, has been travelling in Afghanistan and Nepal and meeting women who’s lived experience is a conflict of chronic gender-based violence. Her initiatives are to integrate storytelling into mental health trauma interventions globally in contexts of war, oppression of women’s speech, violence towards women and girls, and writing against the backdrop of rich story-telling traditions.

As I write from the heights of Nepal, my vision is engulfed by a globe of surrounding mountains. They stand majestic and solemn into the sky. Carved deep into the mountain hearts are the trails and tracks of their wanderers’ journeys and within them are the graves of the stories that they told. At dawn, the story rose, and at dusk, the story faded.

Peacefulness betrays the legacies that we could find. The stories in the mountains are resting. This is a beautiful silence. There is a freedom in their untouched and unheard voices. Because they lay with the mystery of the mountain’s strength and existence; there is a landscape of stories and a landscape of mountains.

The tragedy of a story is when the storyteller is no longer writing the story that she is living with within her.

The stories I was graciously given were from a women’s safe house, a vast juxtaposition to the wide and open world that her ancestors believed in. Now on her horizon there is no distance to seek, no land to explore, no story being told.

One month ago, I was writing beneath a different mountain in the heart of Afghanistan, but the stories echo, timeless and boundary-less.

It is a strange role to be receiving the telling of a story. I feel an extreme privilege to be surrounded by a story that has not been opened before. When a person gifts their story, it is a journey of exploration. Finding the story of the self creates a landscape, and to bear witness is to discover an unexplored territory, a place within a person’s world that has not been seen before.

The stories that were being shared with me were secrets, secrets in the mountains just like the mountains themselves contained secrets, journeys that no longer held paths to their destination, spaces of pure untouched land.

The tragedy of the story, though, is in its silencing. The stories were like bodies that fell from hidden mass graves, their sufferings and the deaths that buried them deep in silence were marked by injustice, brutality, violence, and isolation.

Even in the speaking of the story, the words that were falling heavy into the air were betrayed by a wounded silence. The story-teller must bear their self to tell their story, but in the diminishing of their identity as a human being, I could feel their burdens, the weight of a wish to be held as a person in their worlds. Underneath these moments where the women became their own storytellers, they were story-sufferers, suffocated by a silenced self and voice.

During the telling of their story, time felt different. Time did not pass by. There was a suspension of the time that had been lost from their lives because of violence; those moments that placed them in the grave whilst still alive and stole their breath away.

Their story became our journey. They travelled with me, we became wanderers through a language that was not ours. We wanted to speak of beauty, of dreams, of hope, but the narrative that had been sewn into their skin told a more sombre tale. Still, we continued, we took each step together through this tough terrain and we found a path through as she held her words like a fence that guided us to a space where she could kneel and touch the ground, and find her land of freedom.

I will carry their words, such precious cargo, from these mountains, cradles and graves, from the women, the silenced storytellers of Afghanistan and Nepal to the front-lines for justice.

There is silence in the mountains. Yet, silence comes from somewhere, from the winds and the valleys across their distance. Silence sounds beautiful when the silence is part of freedom, but being silenced means solitude and stagnancy. A story that cannot travel is a mountain that does not reach the sun.