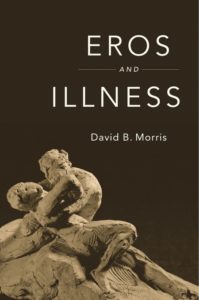 With the provocative pairing in the title of his new book, David Morris sets himself the task of dramatically altering the perceived relation between these two terms. As he contends, there exists less of an opposition and more of an affinity between them than we are usually willing to admit. At times, they even seem like bedfellows rather than rivals: “eros and illness both usually send us under the bedcovers” (27). Professor Emeritus of English at the University of Virginia, Morris began his academic career focusing on eighteenth-century literature before turning his attention to the medical humanities. In some ways this new book is a follow-up to and an elaboration of a couple of his previous ones, including The Culture of Pain (1991) and Illness and Culture in the Postmodern Age (1998), but at least one significant difference sets this recent work apart from the rest. Morris draws from his personal experience as caregiver for his wife, Ruth, after she was diagnosed with early-onset Alzheimer’s. It is this model of care, where provider and patient are the most intimate of partners, that allows Morris to explore the neglected dimension of eros in illness.

Morris begins by developing a capacious interpretation of eros, one that cannot be reduced to sexual activity nor to the Roman equivalent of Cupid. He instead derives his understanding of the concept from both the French philosopher Georges Bataille and the Canadian poet Anne Carson, and while he carefully stipulates that eros resists any easy definition, the word that comes closest to naming it is desire. He proceeds with a thorough examination of desire in the context of health care—or what he calls “medical eros”—mostly through illness narratives and doctors’ memoirs. He occasionally supplements these primary texts with analysis of literature and the other arts, as when he discusses the waiting involved in caregiving as akin to the waiting depicted in Samuel Beckett’s most famous play, or as when he finds an affirmation of eros in a series of nude portraits that Amedeo Modigliani painted while suffering from a terminal illness in wartime Paris. What he eventually uncovers amounts to an alternative medical genealogy, a recovery of the ancient figure of Asklepios as the embodiment of the obscured tradition of eros in Western health care. For Morris, the dominant stature of the other ancient healer, Hippocrates, and what he represents—biomedicine, or what Morris terms “medical logos”—has resulted in a reduction of the pluralism of healing practices, inhibiting the effectiveness of treatment for chronic illness.

From a certain angle, the book falls into a recognizable pattern of decrying how science-based, data-driven medicine has lost sight of its core humanistic principles, which I suspect would prompt many health care professionals to respond that the realities and demands of the job only allow for so much empathy and compassion. However familiar Morris’s argument may sound, the frequency with which medical logos runs up against its own limits warrants reiteration. If medical eros seems like some New-Agey solution to the problems of modern health care, it does a lot more good than some of the other reactions, such as over-treatment, that occur when doctors confront uncertainty or a lack of options. Perhaps the more insightful and original contribution of this book, though, is less its appeal to humanize medicine and more its belief that anyone can learn how to care for those who fall ill. Indeed, as Morris suggests with his own transformation from English professor to fulltime caregiver, the innate capacity to provide humane care stems from the eros that one already bestows onto his or her loved ones. The relative absence of Ruth’s story further underscores that this book chronicles the experience of illness not from the perspective of the patient but from that of the caregiver, although at times the boundary blurs. Morris himself becomes a patient after suffering a heart attack, which he attributes to the stress of providing care and which he takes as an example of a “supradyadic effect,” or how one’s health is interdependent on the health of those in one’s social network.

The book, overall, reads like part Bildungsroman of a caregiver and part philosophical treatise on the nature of caregiving. Morris strives to preserve the desire that drew him to Ruth in the first place and sustained them through three decades of marriage. In the face of regret at not recognizing Ruth’s symptoms earlier, guilt for his irritability towards Ruth’s increasing debility, and, most of all, anguish at the terrible inverse logic of dementia (“she was fading emotionally, just when I felt in greatest need of her ordinarily loving expressiveness”), Morris maintains that eros doesn’t necessarily have to evaporate altogether and may actually serve as the greatest resource when medical logos has no answers (39). Along with the personal experiences that he relates, the case for eros is strongest when grounded in specific instances wherein biomedicine finds itself ill-equipped. Morris’s inclusion of the writings from people with non-normative identities—such as the African-American, lesbian poet Audre Lorde who claims in The Cancer Journals (1980) that the “love of women healed me”—proves particularly effective in this regard. Dwelling on the accounts from those at the margins testifies to the potential of medical eros to help remedy the imbalance of treatment for underserved communities. In addition to the benefits made available by eros, the cost of not acknowledging its contributions equates to an egregious oversight. Morris cites an estimate by the American Association of Retired Persons that within the U.S. 36-38 million family caregivers provide $350 billion (approximately £270 billion) in unpaid labor annually.

Yet counterexamples exist to raise questions about this book’s insistence, in its more unrestrained moments, on championing eros as a possible panacea. The anti-psychiatry movement, which Morris overlooks, would seem to embody many of the characteristics of medical eros. For all the necessary reforms that it has lead to, it has arguably been too successful in undermining biomedical treatments for psychiatric ailments. While the dismantling of mental health care results more directly from draconian cuts to funding than from this particular movement, the U.S. continues to live with the legacy of an impaired system of psychiatric care. That said, Morris anticipates an objection such as this by advocating for a balance between eros and logos. His goal, as he states it, is for biomedicine “to recognize eros and to deal with it—the good and the ill—mindfully” (13).

The principal testament to eros that Morris offers may ultimately be the fact that he managed to write this book. While caring for Ruth, Morris admits to feeling drained of his normal passion for writing: “I could write, but writing lacked all pleasure, joy, and desire” (251). As the examples curated by Morris attest to again and again, illness throws eros into disarray. One of the more telling instances in the book involves the poet Jane Kenyon, suffering from end-stage leukemia, who is reminded by her husband that the bed she lies on is the same site of their countless sessions of lovemaking over the years. This is the type of recognition that Morris prescribes, an awareness of how a bed, as object and symbol, stands for the underlying bridge between eros and illness. The challenge of the latter consists of finding new ways to realize the former. The strength of Eros and Illness resides in how Morris models the counteracting of illness by eros through his writing, eloquently giving voice to Ruth, who lost hers, and rediscovering his own in turn.