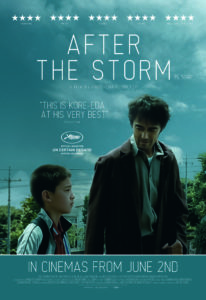 Japan is well known for its relatively traditional social structures, a predetermined life course that heavily influences career choices. Kore-eda Hirokazu’s latest film After the Storm explores those paradigms through the story of Ryota (Hiroshi Abe), a hapless man in his late 40’s who won a major award for The Empty Table, a novel he wrote as a child. However, his adult life is plagued with failure; he is divorced, falling behind on paying his son’s school fees, and abuses his day job as a private detective by blackmailing his clients. Still, his worst enemy seems to be a gambling addiction; a trait he inherited from his recently-deceased father. In contrast, his elderly mother, Yoshiko (Kirin Kiki), is a feisty, strong woman who is trying to get her son’s life back together by scheming to bring him closer to his wife and son. Yoshiko is the perfect model of ‘successful ageing’; she is not a victim of loneliness or social isolation, in spite of being a widow living alone in a council flat. She spends her time listening to music in weekly classes and practises Tai-chi in neighbourhood group sessions; in short she is content with her own company, wisely commenting, ‘Making new friends with people of my age only means more funerals’.  The contrast between the positive life-approach the old woman adopts, and her son’s self-destructive behaviour and bitterness, is remarkable.  The inter-generational bond between Yoshiko and her grandson, Shingo (Taiyo Yoshizawa), is another factor in Yoshiko’s well-being until a typhoon brings the family members together under one roof to candidly face their hidden secrets and prejudices.

Continuing his fascination with ‘father-son relationships’ which was a prominent theme in Like Father, Like Son, Hirokazu delves deeper into negative personality traits such as gambling, contemplating whether inheritance or environmental factors play a more prominent role in the vertical propagation of addictive and compulsive behaviours. Ryota’s father was a pathological gambler who taught his son the rules of buying winning lottery tickets, and Ryota is following in his father’s footsteps by doing the same with his son Shingo as a bonding exercise.

Full of astute observations on ageing, the film upholds family values; having a role in the upbringing of grandchildren is an important dimension contributing to well-being in later life. A study comparing older Japanese and American people showed that personal growth and positive relations with others were highly rated amongst older Japanese people as important factors in psychological well-being. (1)

When asked whether the character of Yoshiko is representative of old people in Japan, Hirokazu states: ‘I try not to think about such big themes when I am making movies. It’s just that the grandmother is a fairly accurate portrayal of my own mother. I wasn’t consciously making her happy, but I was trying to show how she dealt with her “unfulfilled dreams” by “loving the present/now”, and how that was different from the protagonist, Ryota, in dealing with his aborted dreams. I don’t think the elderly people in Japan are happy. When I visit European countries, I always feel that old people there seem so much happier’.

In spite of its focus on positive trends in old age, After the Storm does not shy away from exploring darker subjects such as financial abuse of old people by their close relatives in Ryota’s scams to embezzle money from his mother. Hirokazu thinks that some older people are resourceful enough to deal with such issues in talking about Yoshiko: ‘Knowing she has been lied to, she still goes along with it; that is how she deals with her son. Life is more complicated than simply labelling people as “black or white”. As a director I do not have bad characters, and others who are very critical of them.  I make sure that there are other characters in the story that understand the motivations of the “bad ones”. I think of human beings’ short comings in gradual steps when writing their traits for the screen, so that the audience can warm up to them through a flaw they can relate to. The filmmaker’s position is not to forgive someone’s flaws or empathise with them blindly, but also to be able to laugh at them from a distance.’

After the Storm is a beautiful gem that shines a light on the factors that make some people happy and content; Yoshiko does not dwell on her bereavement; she even breathes a sigh of relief being liberated from her gambling deceased husband.  Her perpetual sense of hope and positivity brought to my mind Emily Dickson’s poem ‘Hope’:

‘Hope’ is the thing with feathers-

That perches in the soul-

And sings the tune without the words-

And never stops- at all….