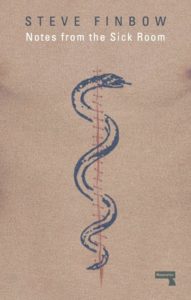 This is a book about sickness, more specifically about the illnesses of a number of well-known artists and philosophers. It is also about the illness history of the book’s author, Steve Finbow. He uses his own experiences of illness (and they are many and varied) to introduce the reader to the travails and writings of the individuals whose sickness he explores. The word ‘travails’ is apposite here as it suggests that illness can be, if not a life’s work, then a determining factor in how people live their lives, as well as rendering their experience meaningful through writing and other forms of art. Key to this is the idea that being trapped in a diseased body opens up the possibility of escape through self-examination, issuing in a productive outcome. To make this argument Finbow explores in detail the circumstances and reflections upon illness of several artists and writers. He introduces us to cancer in the life and death of people such as J G Ballard, Iain Banks, Christopher Hitchens and John Diamond. Finbow details the sufferings of Frida Kahlo after the bus crash that severely damaged her pelvis; the effects of being shot upon Andy Warhol and his art; the denials of illness that were part of Bruce Chatwin’s extensive travelling; and the descriptions of and insights into illness offered by writers such as Katharine Mansfield and Virginia Woolf.

How should one tackle a subject like sickness while providing detailed biographical detail about one’s own and others’ illness, at the same time weaving a complex argument drawing upon philosophers such as Nietzsche and Foucault? Finbow achieves this by treating the book as a virtual hospital – a clinical space – populated by celebrity patients and some celebrity doctors (e.g. Susan Sontag). The entries and exits from the various departments to which he escorts the reader are managed in part by introducing us (in detail) to his own medical history. These extend from a pain in the buttock to severe pancreatic necrosis and a spell in intensive care, all illuminated by details from his medical notes. In the case of the pain in the buttock, Finbow uses this as an approach to the question of whether cancer is alien to or part of the self and, in the case of the latter, how it might become so. Turning on the issue of denial, he argues that the denial of disease (“flight to sanity”) is not healthy, but that health tolerates disintegration and, by implication, transforms it through art and writing.

The idea that illness and the state of being sick can be the bases of productive art is expressed in a quote that Finbow provides, in which John Berger says of Frida Kahlo: “The capacity to feel pain is, her art laments, the first condition of being sentient. The sensitivity of her own mutilated body made her aware of the skin of everything alive – trees, fruit, water, birds, and, naturally, other women and men. And so, in painting her own image, as if on her skin, she speaks of the whole sentient world” (322). By drawing attention to this Finbow is agreeing with Nietzsche and Foucault that art is an act of freedom-making borne of suffering. This extends to the person’s life – including their art – so that what is rendered is expressive of a way of being rather than illness per se. It is perhaps for this reason that he objects to Susan Sontag’s attack on the use of metaphor as aestheticizing the “what should not be imagined”  – the abhorrent disease that is cancer. To this Finbow replies, “what nonsense”, and argues that when Sontag wrote about cancer in her book Illness as Metaphor (1978) she was, in effect, aestheticizing it.

The problem here is that there is a difference to be made between aesthetics and aestheticization. Aestheticizing, at its root, directs the viewer/reader to the artist/author rather than the object. An artwork is the product of a transformation that directs our attention to the ineffable; it is this that, in part, gives it aesthetic value. This is not always an easy line to draw, but it matters in this book because Finbow treats of both aesthetics and aestheticization in the course of his descriptions and discussions. By dramatising the artists and writers he discusses as either patients or doctors, Finbow risks muddling this distinction. So, for example, he writes: “Dr Sontag sits back in her chair, her fingers pyramided above the desk, the silver streak (poliosis) in her hair illuminated by the overhead fluorescent strip lights”. And later, “She closes the book, gets up, takes me by the crook of the arm and says authoritatively, ‘Let’s go to your office. I think we need to have a little chat’” (300). For this reader at least, these passages had the effect of displacing attention from the book’s argument about illness to the author’s interest in his subject matter, which at times I found unhelpful.

In terms of the book’s overall aim Finbow goes some way to demonstrating that illness improves the work of the artists considered, though he does not show exactly how art draws upon illness. Instead, the book remains a bricolage of ideas that coheres as a sort of image, a story of the necessity of ill health in our lives. Its overall message – drawn from Nietzsche – that life needs illness, is incomplete without it, is an important one. Health is not separate from illness, and a deeper understanding of health includes the idea that it can be strengthened by illness. And for that, and its historical and biographical detail, Notes from the Sick Room makes for a most useful and interesting read.

Alan Radley is the author of Works of Illness: Narrative, Picturing and the Social Response to Serious Disease. Ashby-de-la-Zouch: InkerMen Press, 2009.