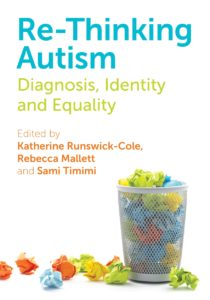 Assistant Professor of Sociology at Georgia Tech and author of Multiple Autisms: Spectrums of Advocacy and Genomic Science

Is any stable and enduring definition of autism possible? Is autism a disruption of what it means to be human? Is it possible to imagine services differently? These are just some of many critical questions addressed in a timely edited book, Re-Thinking Autism: Diagnosis, Identity and Equality. The nineteen authors who contributed to this volume critically engage with “this thing called autism,” in order to disrupt the dominant biomedical model surrounding the diagnosis, treatment, and understanding of autism. The editors describe the volume as a collection of “critical autism studies,” an emerging field concerned with whether the diagnosis of autism is scientifically valid and useful for the lives of people who are labeled with an autism diagnosis, as well as their families and allies. The roots of this approach are cross-disciplinary and draw from a range of perspectives such as critical psychiatry, disability studies, cultural studies, and the social sciences. This three part volume has something for everyone – parents of children with autism, practitioners who provide various of services to people living with autism, and researchers and academics in a range of fields such as psychology, psychiatry, disability studies, cultural studies, or education. The scholars are primarily located in the UK, with a few authors from Canada, Australia, and Brazil. This assemblage of disciplinary perspectives and geographic locations provides important insights into the scope and depth of how researchers are thinking about autism through a critical lens.

The first part of the book grapples with the question: What is autism? It starts with a personal account from Katherine Runswick-Cole, who acknowledges the dilemma of her status as a mother-researcher and the risks of not challenging dominant biomedical frameworks of autism. The focus of her concern, like much of the other authors in this volume, is not about autism itself, but “the systems, attitudes, and environments that disable people with autism” (p. 23). She eloquently argues that “this thing called autism” is a contemporary cultural construct; a narrative that dominates or drowns out all other stories of autism that can be told. The next two chapters focus on the history of the changing definition and diagnosis autism and the wide variation of symptoms that exists in any one person with autism. Sami Timimi and Brian McCabe demonstrate how the biological understanding of autism has not become any clearer since it was first described by Leo Kanner in the 1940’s. These authors suggest that autism spectrum disorder is not a coherent biological construct and lacks conceptual clarity. Richard Hassall critically asserts that there is “no single distinctive psychological or neurodevelopmental disorder represented by the concept of ‘autism’” (p. 49). Hassall challenges us to re-think whether autism is a ‘natural kind’ of disorder, which conceptualizes autism as fundamentally biological deficiencies. This predominant framework reinforces those with the label of autism as essentially different and abnormal. The last chapter in Part 1 is an empirical study of public negotiations surrounding the category of autism in Brazil, including an analysis of the polarization within the Brazilian mental health community of the ontological status of autism (mental disorder or disability) and representations of autism in Brazilian printed media and online social networks. These different lines of analyses demonstrate how autism is no longer exclusively in the domain in medical science and extends to various other public spheres, including parent activists, lawyers, and virtual social networks. These alternative stories disrupt the ontological status of autism as a ‘problematic category.’

Part 2 of the book offers the most interesting critical analyses with a focus on deconstructing autism. It starts with a brilliant chapter by Anne McGuire who offers a critical and nuanced inquiry of the normative and normalizing nature of violence against people with autism promoted by mainstream news and advocacy organizations. McGuire examines the dominant discourse of ‘people living with autism,’ which discursively frames autism as some ‘thing’ separate from the fully living human person. Other chapters in this section also begin to question the framing of autism in the context of what it means to be normal and human. Kim Davies critiques the deficit Theory of Mind model of autism to expose how this ablest framework places autistic people at the ‘edges of the boundary of human being-ness” due to their lack of the very qualities that make us human (p. 133). Dan Goodley also begins to “dissect humanity” through the lens of autism and its relationship with the categorization of the human being. Drawing on post-colonial theory Goodley deconstructs how autism weaves in and out of both the ethnoclass man (embodied in the white, heterosexual, American, able, male) and those engaged in wider human struggle. His conclusion holds a similar sentiment that is thematic throughout this section, “any study of autism must also engage with the simultaneous study of the human” (p. 157).

Part 3: Changing Practice, is the largest section and made up of seven chapters that contend with whether the label of autism adds anything to how various services and practices of autism are experienced from a range of perspectives and disciplinary practices such as education, psychotherapy, psychiatry, or neuroscience. A central theme in this section is that professionals (e.g., educators, therapists, clinicians, or researchers) need to “resist the dehumanizing attacks on personhood that expel children to the margins” (p. 199) and “be committed to the qualities of people, not as autistic, but as human beings in shared moments of time and space” (p. 249). Gail Simon describes this shift in professional practice as having a “reflexive curiosity” about new ways of being with people with autism that opens up opportunities for meaningful and fruitful dialogue (p. 285). As I argue in my own research on the excess funding and research in autism genetics research in the U.S. (Singh, 2016), Simon and other authors highlight how many avenues of research that would be beneficial for people diagnosed with autism are missed or overlooked such as long-term and quality of life issues.

Although this volume brings much needed attention to alternative ways of knowing autism and critiques of the social construction of autism in relation to what it means to be “normal” and “human,” this is not the first attempt to map out a field of “critical autism studies.” Joyce Davidson and Michael Orsini edited a 2013 collection called Worlds of Autism: Across the Spectrum of Neurological Difference. Their conceptualization of critical autism studies is similar to Re-Thinking Autism and is based on an interdisciplinary commitment to “develop analytic frameworks using inclusive and non-reductive methodological and theoretical approaches to study both the nature and culture of autism” (p. 12). It is different in that it focuses more on how power relations shape the field of autism and how narratives of autistic individuals are becoming actors with agency that disrupt assumptions of normalcy and (cognitive) difference. Although power is implicit in many of the chapters in Re-Thinking Autism, the mention of power: who has it, how is it used, and how it affects what we know and understand about autism is less explicit, with a few exceptions. Also, unlike the serious commitment to situated knowledge of autistic people themselves in Worlds of Autism, a commitment to include autistic subjectivities are less apparent in Re-Thinking Autism. Finally, despite the subtitle, Diagnosis, Identity and Equality, there is a limited focus on inequalities that exist in access to early evaluation and services that are apparent based on social class, race and gender. I was surprised of the limited discussion of broader structural inequalities that enable experiences, autism constructs, levels of resistance, and/or cultural and symbolic meaning of autism. These voids are by no means limitations of the volume, but rather speak to the broad scope in which critical autism studies can engage and the need for further analyses on questions this edited volume raises on how we can continue to “re-think autism.”