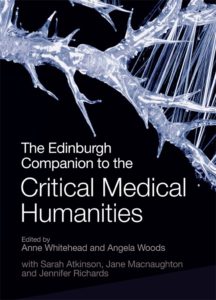 The Edinburgh Companion to the Critical Medical Humanities

‘Critical medical humanities’, say the editors of this volume, marks a ‘second wave’ in the field. First-wave medical humanities was characterized by an emphasis on ethics, education (championing the arts in particular), and the subjective experience of illness, diagnosis and treatment. The second wave, by contrast, ‘energised’ by the social sciences, turns to interrogate the ‘primal scene’ of ‘mainstream’ medical humanities – the clinical encounter between doctor and patient, more specifically the diagnosis of cancer. Seeking a ‘thicker’ understanding, its focus is not ‘the lived body of the patient qua patient’ but the political, social and cultural contexts and factors (race, class, gender, sexuality, debility) which underpin or influence the illness experience. In thus self-consciously positioning itself as a foundational text of the new wave, the Companion, as we shall see, is opposed to the old binaries of patient/doctor, illness/disease, medicine/humanities within an orientation which saw the medical humanities as a ‘benign helpmeet’ to biomedicine. But this text is not seeking, therefore, to ‘create new binaries’ (between research and education, practice and theory). Rather, it stresses the ‘mobility’ and ‘fluidity’ of critical medical humanities offering ‘an encapsulation of the field’s current momentum’ as an area of inquiry that is ‘highly interdisciplinary, rapidly expanding and increasingly globalised’.

The book achieves this latter mission admirably. Formally organized into four thematic strands – ‘Evidence and Experiment’, ‘The Body and the Senses’, ‘Mind, Imagination, Affect’, ‘Health, Care, Citizens’ – the book’s introduction nonetheless acknowledges, and explicitly offers, numerous alternative trajectories. Among these, ‘Spatial Pathways’ emphasizes the value of social scientific methodologies within a global health context: Hannah Bradby’s and Sarah Atkinson’s chapters, for instance, on the migration of medical care resources (staff and organs) and Lucy Burke’s and Rebecca J. Hester’s on the politics and institutionalization of (respectively) ‘care’ and cultural ‘competence’, offer exemplary demonstration of how fine-grained interdisciplinary approaches (comprising history, sociology, human geography, labour and health studies, feminist and literary approaches) are critical to an understanding of the forces which shape health outcomes and policies. ‘Disciplinary pathways’ fulfils the volume’s remit of ‘extending to arts disciplines which have not been so influential to date’, the visual arts in particular. Suzannah Biernoff’s chapter on the ‘cultural scripts for being in pain’ (religious and secular) to which art from past ages gives access, Rachael Allen’s on the artist’s unique engagement with the body in the anatomy lab, and Edward Juler’s on the surrealists’ depiction of viscera as the dark and amorphous centre resisted by the ‘hygienic’ ego, emphasize the role of the visual arts in ‘reconceptualising the body and probing its position and status’ within biological constructs.

For all these second-wave emphases, the most dominant of these pathways across the volume is a rather familiarly ‘Historical’ one (isn’t that also a characteristic emphasis of mainstream medical humanities?), though the offerings themselves are fresh and rich. Corinne Saunders suggests that the literary representation of visionary transport and voice-hearing in medieval texts offers an alternative model to the contemporary diagnosis of psychotic symptom. In relation to the early modern period: Cynthia Klestinec explores the relation of touch and trust in the physician-patient dynamic and its contribution to the historical development of patient compliance; Jennifer Richards and Richard Wistreich recover what has been rendered invisible to modern medicine through the dominance of visual and written information – the primacy of the voice in the transmission of knowledge;  Lauren Kassell considers how digitization of medical records of the period, themselves newly driven by the advent of paper technologies, beg question about the kinds of evidence which constitute medical history. Looking back to the nineteenth century: Heather Tilley and Jan Eric Olsén find a valuable perspective on constructions of disability in pedagogy relating to blind pupils; Peter Garratt contends that the period’s shift away from metaphysical explanations for art to those of embodied psychological aesthetics offers valuable insights for contemporary models of bibliotherapy; Lindsey Andrews and Jonathan M. Metzl argue that nineteenth-century imaging practices help make visible a racial legacy within present-day imaging technologies.

I would add to the editors’ suggested pathways an Activist or Interventionist one, as this characterizes, for example, Lisa Guenther’s searing elucidation of the nexus of political, legal and medical power which legitimizes the barbaric practices of lethal injection for death row prisoners, as well as Bethan Evans’ and Charlotte Cooper’s challenge, via Queer and Disability Theory, both to dominant medicalised accounts of fatness and the tendency hitherto of conventional medical humanities to exclude or neglect activist movements. But I would also stress that ‘first-wave’ or ‘mainstream’ concerns are just as readily traceable. Ethical, for example, is an emphasis which (implicitly or otherwise) runs through William Viney’s study of twin research and the dangers inherent in the idea of ‘natural laboratories’; Luna Dolezal’s  argument that the increasing opportunities for technological enhancement of the human body urgently require a range of humanist perspectives to grasp the physical and existential toll, as well as the satisfactions, of morphological freedom; and David Herman’s contention, in relation to the value of animal companions for people living with autism, that a proper understanding of selfhood as situated within wider webs of creatural life, demands a new kind of ‘interdisciplinary and collective’ story. Experience of illness is at the centre of Jonathan Cole’s and Shaun Gallagher’s fascinating demonstration of neuroscientific and phenomenological  understandings working hand in hand within a clinical setting to de-pathologise chronic conditions and contribute to insights of therapeutic benefit; and, with a more decidedly historical inflection, Ian Sabroe and Phil Withington transpose the Renaissance-humanist conception of ‘counsel’ to modern-day clinical consultation to highlight the value of the emotional space opened by genuine dialogue between doctor and patient.

The really valuable aspect of this book, in fact, is its eclectic inclusiveness – ranging (as Patricia Waugh puts it in her helpful afterword to Part 1) from ‘the performatively paratactic and experimental to scholarly sobriety and sharp socio-cultural critique’ – enabling one to find the contemporary medical humanities one is looking for. This is perhaps the principal reason why some of the terms and concepts used to tie these strands together prove problematic.

‘Critical’, for example, usefully signals the influence upon second-wave medical humanities of twentieth-century post-war critical theory. But the influence of Foucauldian or feminist thinking is, from the evidence of this volume, a scattered and partial one and markedly less visible than the historical scholarship which, as mentioned above, predominates. Critical, in this particular sense, then, does not really hold the new medical humanities together. And, as Martyn Evans forcefully points out in his introduction to Part 3, a progressive critique is visible in the mainstream of medical humanities and traceable back to forebears in medical ethics, philosophy and sociology of medicine: indeed, ‘humanities have been seen as critical in the sense of being vital to medicine since long before medical humanities emerged as a discrete field of study’. Brian Hurwitz and Victoria Bates, on the place and history of narrative in contemporary clinical practice, and the challenges to models of narrative coherence offered by Laura Salisbury’s study of ‘disrupted, disordered’ aphasic speech in relation to the expressive practices of literary modernism and Jill Magi’s, Nev Jones’s and Timothy Kelly’s experimentally ‘cut up’ rendering of psychotic subjectivity, all – in their distinct and partly opposing ways – continue that trajectory. This is valuably the case, too, in relation to Rosemary J. Jolly’s contention that literary narrative ‘has a unique capacity to explore transcultural encounters of radically differing conceptualizations of wellness and disease’ and Anna Harpin’s analysis of the power of Shakespearean tragedy in a high secure setting (Broadmoor) ‘to relocate the patients’ index offences back within the continuum of human experiences’. The texts and contexts have changed or expanded but, as Jo Winning says in another of the overviews which usefully punctuate the Companion, these chapters ‘collectively and forcefully remind,’ as medical humanities has always sought to do, ‘that biomedical discourse is not the only knowledge base’.

While the volume thus witnesses and acknowledges these continuities, what critical medical humanities fundamentally represents nevertheless, the Companion asserts, is a displacement of the ‘common calculus’ within medical humanities whereby the biomedical ‘registers as the cold and deadening engine of facts and hard-nosed pragmatism’ and the humanities as the ‘non-reductive, life-affirming context expert’, where ‘all affect and feeling are to be found’. Thus, the new ‘E’ proposed as replacing Ethics, Education and Experience in critical medical humanities is that of ‘Entanglement’. Originating in science and technology, as Des Fitzgerald and Felicity Callard explain in their polemical chapter at the opening of Part I, the concept rejects the notion of separable units with determinate boundaries (persons, disciplines, ideas) whose telos is integration, in favour of a dynamic of intersection, inseparability, interdependence. ‘We cannot easily divide the practices (or objects) of “science” and “medicine” from the practices (or objects) of social and humanistic inquiry. We do not, as scholars from various disciplines, bring our objects and practices to one another through a kind of free-trade agreement; rather we re-enter a long history of binding, tangling and cutting.’ This thinking has self-evident applicability to the exemplary chapters which immediately succeed it: Annamaria Carusi’s on computational modelling of biological processes (a hybrid of interconnected experiments, equations, simulations) which underscores ‘the continuities between science and art as expressive modalities of meaning which do not merely communicate pre-existent meanings but forge new styles of knowing’; and Volker Scheid’s tracing of the genealogy of holism, a concept less emergent from, than retrospectively ‘accommodated’ to, ancient Chinese thought under mid-twentieth century communism, and subsequently assimilated to a Western systems biology. Entanglement as a conceptual frame for diverse interdisciplinary methodologies also promises, it is true, robust theoretical backing for a discipline which, as Stuart Murray points out, is often unfairly categorized as representing ‘a soft humanities approach’.

Still, there is something unconvincing about the way in which the notion is self-consciously introduced into separate chapters in order intellectually to stitch together these highly individualized offerings. Not only does the effort after conformity to the ‘critical’ line fly in the face of the ever-indeterminate heterogeneity which the concept of entanglement is intended to represent: in its recurrence, the idea begins to seem rather modish, especially when offset by the wealth of historically-oriented chapters which give priority to time-honoured practices and thinking over the latest scholarly fashions. The real paradox, however, is that what is potentially most valuable about entanglement in the context of medical humanities – its engagement with the ‘messy’, the ‘knotted’, its ‘staying with the trouble’ – is still best (or most authentically) demonstrated in this volume by examples of lived experience. So, for instance, when Christoph Rehmann-Sutter and Dana Mahr  show how a bio-medical construct inaccessible to direct experience – the genome – is nonetheless intrinsically part of the experience of those individuals who embody and ‘live’ it; so, too, when Jane Macnaughton and Havi Carel offer a compelling account of breathlessness as engaging cultural, emotional and existential dimensions which while ‘not part of the language of the clinic, are central to the patient’s experience’, thereby powerfully underscoring their contention that bridging this epistemic gap can challenge and broaden the evidence base on which symptomology is addressed clinically. These are exemplary models for what Macnaughton calls ‘a critically engaged “helping” medical humanities’, in which the ‘moral imperative’ is to improve understanding not only in scholarly/disciplinary fields, but also ‘in the clinic’. The primal scene, or the lived illness which it represents, is not so easy to leave behind, nor so necessary or desirable to reject, as the editorial introduction proposes. Indeed, medical humanities without the patient qua patient at its centre, Macnaughton appears to suggest, is in danger of facing an ethical dead end. Fortunately, the evidence of this volume is that second-wave medical humanities still has a strong orientation towards, as Callard and Fitzgerald put it, that ‘most central object of the medical humanities’ – life.