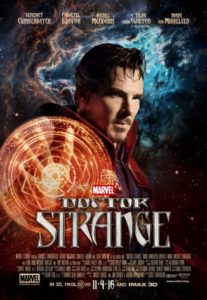 A Superhero inside you…

Can a blockbuster film telling the story of a Marvel Superhero ask serious existential questions about mortality in a character-study narrative in addition to providing edge-of-the-seat popcorn entertainment? Doctor Strange, the 14th film from the Marvels Cinematic Universe (MCU), responds to that question with an emphatic Yes, and makes the viewer eager to see part 2 in the not so distant future. Dr Stephen Strange, played with abundant charm and wit by Benedict Cumberbatch, is an egotistical, highly driven brain surgeon who is called upon to operate in the most complicated life threatening neurosurgical emergencies. An unexpected turn of fate in the form of a car accident causes serious damage to his hands, preventing him from operating. A series of surgical interventions fail to restore his hand function. His quest for super-natural recovery takes him on a journey of self-discovery around the world, and an ultimate Superhero transformation.

The key to Doctor Strange’s redemption as a human being comes with a hefty prize; he must choose between saving his career as a surgeon and ‘saving the entire universe’. Even though he is an accomplished surgeon, Doctor Strange still needs a mentor in the form of ‘The Ancient One’, played impeccably by Tilda Swinton, to help him unravel the mysteries of the universe. The values of apprenticeship, such as listening and following advice are extremely challenging to a highly qualified surgeon who is used to the rules of strict mentorship and to being obeyed. Through the journey of the reluctant student and his benevolent master, serious questions about the sanctity and purpose of life, the nature of religion, and philosophy are posed.

In spite of the fact that the theme of ‘One chosen man saving humanity’ has been explored before in films like The Matrix, Superman and Spiderman, Doctor Strange still manages to look and feel original with mind-blowing time and space bending special effects. The co-existence of kind and caring traits alongside an evil personality in one doctor have formed the backstory of Dr Jekyll and Mr Hyde, and Mary Shelly’s Frankenstein. However, Doctor Strange takes the theme of good vs. evil to a whole new level by expanding the personal struggle to explore the basic nature of human existence – our purpose in life, spirituality and faith, and man’s everlasting quest for eternity.

Several scenes will be familiar to an audience with a healthcare professional background: Cardio-Pulmonary Resuscitation (CPR) features twice, in one scene graphic details of how to perform peri-cardiocentesis (evacuation of blood from around the heart) are shown, and in another highly imaginative scene, the dying patient being resuscitated leads the CPR procedure. In addition to the physical dimension of the CPR act, a parallel exploration of who determines a patient’s best interests when it comes to making the ultimate ‘Do not Attempt Resuscitation’ (DNAR) decision. The scene of a key figure dying, and using their power to stretch time to enjoy a few more seconds of living, is a powerful metaphor for the value of life of patients in their terminal stages. It is also a call for doctors to truly appreciate the significance of their irreversible judgement when they stamp that DNAR order. An inherent ethical and moral dilemma faces Dr Strange when he is about to kill for the first time; he questions his convictions as a ‘doctor sworn to save lives’ who is about to take away forever a human life.

Are doctors so different from Superheroes? Both save lives and care for humanity. They might wear different uniforms; doctors mostly wear white coats, while Superheroes wear trademark costumes like Doctor Strange with his ‘Cloak of levitation’. The story of Doctor Strange reminds us that doctors are as vulnerable as most other human beings, and are prone to accidents, personal and professional setbacks and tragedies. A redeeming fact though remains in that both doctors and Superheroes still have the power to overcome adversary, and save themselves and potentially others. One life saved is as worthy and as valuable as saving millions of lives. So if you happen to be a doctor, search for the Superhero inside of you.

Film poster and trailer are included with permission from Disney Entertainment, UK.

The medical science fiction of James White: Inside and Outside Sector General http://bmj.co/2eiM5kA

Towards A Structure of Feeling: Abjection and Allegories of Disease in Science Fiction ‘Mutation’ Films http://bmj.co/2eUMdbA