Two poetry book reviews will be featured this week. The second review will appear on Friday. 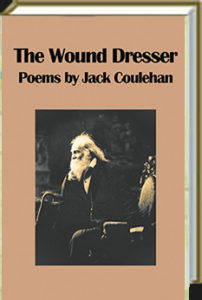 Finalist for the 2016 Dorset Poetry Prize, selected by Robert Pinsky (Poet Laureate of the United States from 1997 to 2000).

The Wound Dresser by Jack Coulehan is a collection of 77 poems that explore the reality of being a physician, reflect on health and illness, and delve into the experience of suffering from different angles. In the following lines I will share how Coulehan’s poetry has made me reflect on diverse aspects of life, disease and on the art of medicine.

The book is the author’s sixth collection of poems, and its title alludes to a composition by Walt Whitman (whose photo appears on the book’s cover): verses that speak about the care of wounded soldiers during the Civil War, and to which Coulehan dedicates his very first piece of the collection. This theme of looking after the sick is central to the author’s poetry.

The order of the poems, though not clearly stated, seems to reveal the passage of time: from the “The Secret of the Care”, which opens the first section exploring the feelings of a junior doctor, to the very last poem of the series, “Retrospective”, which is a reflection on forty years of medical practice. This subtle timeline is structured into four parts, each one orbiting around common themes.

The first section comprises poems that generally reflect on the doctor-patient relationship. A recurrent element of these compositions is the idea of the physician as the one who witnesses the inner secrets of the patient. In “Take Off Your Clothes” we are invited to think about the physical examination: the patient exposed and vulnerable, and the doctor as the one with access to the “narrative in [the patient’s] flesh” (p. 23). Physician and patient are “intimate companions” in a journey through the intricacies of the body, in which we appreciate compassion and loving care from the doctor, but also patent fear from the patient: a topic often conveyed in Coulehan’s poetry (e.g. “The Rule of Thirds”, pp. 26-7).

However, the relationship established between doctor and patient, though close, appears to be at the same time “detached”, perhaps because the access to those secrets does not necessary grant intimacy. In fact, it sometimes seems to signify the opposite, something like a “cold distance”. The four poems “A Lesson in Diagnosis” (pp.5-8) convey to me this tension between “union” and “separation”. The closeness is transmitted through the acknowledgement of the patient’s vulnerability during the clinical exam (“During the discussion/ she keeps trying without success/ to cover her nakedness with a sheet.” p. 7), but the distance is present in the detachment that the doctors demonstrate both in their use of language as well as in their actions (“He drags us to another case —/ this one, a supraclavicular mass./ No one stoops to pick up her glasses.” p. 6). It is clear that while the patient is embedded in pain and anguish, the doctor sees and identifies the problem from afar, without being part of it or experiencing it.

Some poems reflect on the process of learning to practice medicine, and the feelings and thoughts that the clinical encounter trigger in the physician. The need to pretend to be competent (“I palpated/ their abdomens, balloted their livers,/ and listened to respiratory crackles,/ while disguising the depth of my doubt/ with a kindly, but serious look.” p. 3), or the difficulty in interacting with some patients (“I was surprised to find/ how much I disliked some of the patients” p. 3) is present in “The Secret of the Care”, the first poem of the collection. This made me ponder on the physician as the one who has two identities that sometimes stand in tension: on the one hand, the “professional” side that actively cares for the patient; and on the other, his inner world full of thoughts, worries and prejudices that are often hidden in the consultation yet present in his mind.

Finally, the contrast between the patient’s inner life and the painful reality of being ill captured my attention in this section. “The Silk Robe” (pp. 16-7), offers a glimpse of the patient’s life beyond the clinical setting by underlying details like her “blue silk robe”, her “scent” or her “delicate gold chain”. What those details evoke sharply contrast with the reality of her medical condition: the “cultures”, the “catheter”, and the “bed rest” reminds us that she is sick. While reading this poem I thought about the clinical encounter, during which sometimes doctors interact with patients as if their whole being were only their disease. Those doctors sadly forget that the patient is first and foremost an individual; a human being with an inner life that has to be acknowledged and respected. These two dimensions (the person as patient and as individual) are beautifully captured in Coulehan’s literary work.

The second section conveys, through reflections on historical figures or events and mythical accounts, how medicine has changed through time. It also reflects on how human elements like prejudices, fears or beliefs can shape the interaction between doctors and patients, both in the past and today. “To the Heart of Lazar Riverius, Galenist Physician” (p. 40) presents the contrast between the current medical practice (one that operates without “faith” and in a somewhat “mechanical” fashion) and the medicine of the past, which used to embrace the spiritual dimension of the person more openly (“Today the surgeons shut you down,/ open, patch you, put in plastic —/ and not a single Sign of the Cross!”).

In “McGonigle’s Foot” (pp. 42-3) we see how a century and a half ago (1862) prejudices on identity and nationality shaped the medical practice: since the patient is “a foreigner, a drunk, and loud” [emphasis original] there is no need to anesthetize him. (In the notes [pp. 99ff.] we learn that the poem was based on the idea that surgeons back then only gave opiates and alcohol “selectively”). Although we could be tempted to think that this speaks of something that only occurred in the past, the poem reminded me of recent published research in the US, which proves that today black people are less likely to be prescribed opiates for pain management than their white counterparts.1

The third section is a compilation of reflections on the passage of time, on life, and on death. Those moments occur around the world, in places like Alaska, Alexandria, Kosovo, or Cambodia. There are poems on the horrors of war (“War Remnants Museum, Ho Chi Minh City” p. 56), on the passage of time (“Deliver Us From Evil”, pp. 64-5), and on the contrast between life and death: in “Cesium 137” (p. 68) we are presented with a scene in Brazil where the same substance that uncovers the “loveliness” of the children (“their loveliness aglow at last”) also causes their death. That substance is the radioactive isotope cesium 137, deadly toxic.

The tone of this section is sharp, direct and often painful, particularly for me the poem “Christmas in Kosovo” (p. 57), an account of the result of the war in the Balkans. The verses unfold the horror of the conflict with brutal clarity:

“One of the men was found in the courtyard,

decapitated, and so far his head

remains missing. Many had been shot

at close range, after the solider pricked them

with machetes and brass knuckles. Later,

the women were raped, and in some cases

their bones were broken.”

That strongly contrasts with the moment in which the poet is witnessing those horrors (soon after Christmas): a time of hope for the coming of Christ, to which Coulehan alludes through the reference to Isaiah’s “Prince of Peace” (Isa 9:6 “For a child has been born for us, a son given to us; authority rests upon his shoulders; and he is named Wonderful Counselor, Mighty God, Everlasting Father, Prince of Peace”). That strain between hopelessness and belief, so present in the poem, made me reflect on the very same tension that is often present when coping with a diagnosis of a life-threatening illness.

Finally, the fourth section comprises family memories and meditations on personal experiences. This change of perspective enables the reader to think about health and illness from different angles, gaining a richer and deeper understanding of topics previously considered in other poems. “Fever of Unknown Origin” (p. 79) speaks about the urge to find explanations to events that are often impossible to account for (“I hold to an old script/ that says calamities have reasons (…) Convenient nonsense,/ but sometimes true.”), and about the need to find a cause to gain control over the disease. With the narrator as the patient, the poem is a reflection on the fear of being seriously ill, and the threat that that constitutes to our somehow perceived “ordered” reality.

The exposure and vulnerability that often patients feel while being examined is a topic extensively covered by Coulehan from the perspective of the doctor, but in “Role Model” (pp. 80-1) this matter is beautifully explored from the view of the patient. The detached and factual discourse of the physician contrasts with the feelings of shame of the patient, who just wants to leave and hide away from the clinician: a need that perhaps we have all felt at some point when being exposed in front of a stranger.

Overall, The Wound Dresser is a fascinating journey that takes us through the complexities of life, illness and death; a journey during which the reader has the opportunity to reflect on the tension between the objectiveness that supports the clinical encounter, the doctor’s inner world, and the patient’s humanity, secrets, fears, needs and contradictions. The presentation of clinical encounters, the use of historical figures or events, the look at scenes around the world, and the account of personal memories that Coulehan brings us facilitate a contemplation of health and illness from interesting and varied perspectives, thus enriching the reader’s world and triggering meaningful meditations on the art of medicine.