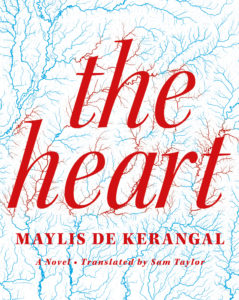 In the UK it is titled Mend the Living, translated by Jessica French, and published by MacLehose Press.

The Heart by Maylis de Kerangal tells the story of 24 hours in the life, and death, of twenty-year-old Simon Limbeau. The narrative includes snippets from the brief hours before a car wreck that ultimately takes Simon’s life, moving through to the aftermath of his death when his heart is transplanted into the recipient Claire Méjan.

At the beginning of The Heart, Simon goes on a surfing trip with friends. On the way home, they are involved in a car accident. The other two young men escape with minor injuries, but Simon is critically injured. Once it has been determined that Simon’s injuries are fatal, and that his brain has ceased functioning, the doctor, Pierre Révol, approaches Simon’s parents to discuss organ donation. Initially reluctant, particularly about donating Simon’s heart which they believe holds his dreams, love and life, they eventually agree. Thereafter we follow the journey of Simon’s heart.

The Heart spends more time with Révol than any other character as we observe him negotiating with different aspects of the organ donation process. We also see Simon’s mom, Marianne, arrive at the hospital, her trauma heightened by being unable initially to get hold of her estranged husband, Sean, Simon’s dad. We then follow the interaction between the parents throughout the horrendous process of losing their adult son. We watch the hospital staff work with and around Simon. We are there when Révol asks Marianne and Sean to donate Simon’s organs. The most painful part of the novel involves witnessing Marianne’s reactions to learning new information about Simon as he is dying. Though we spend more time with Révol, we know Marianne better–we can feel her emotions. We meet Claire, who receives Simon’s heart. We also meet the transplant team and witness both operations: the organ removal surgery and the heart transplantation.

The novel is not about Simon’s life, and it is also not entirely about his death. Instead, it focuses on the donation and transplantation of Simon’s organs, and his heart in particular which we follow to Claire. We care about Simon’s organs as he is being kept alive awaiting surgery, and then it our own hearts that quicken as his is removed. The surgical scenes are the most tense in the novel overall. They allow the reader to alternate between a distance of watching from afar and that of being almost so near to hand that we could imagine ourselves passing the sponge to the surgeon. This is when we are closest to feeling and understanding what the characters experiencing. While the surgery and the donation process are both simplified, for someone who is only peripherally acquainted with such processes, the medical procedures were described in a detailed and interesting manner without becoming overly technical.

The Heart is told from an omniscient narrator’s point of view with a distance that gave me the feeling of being outside a glass door, or looking down from above in an operating theatre, an onlooker on unfolding scenarios. The narrator is not only all-knowing but is also an I who addresses the reader as you on occasion. This had the effect of taking me out of the moment of the action and of detaching me from the story. It caused me to wonder who I actually was, but the answer to this is never revealed and the identity of I remained hidden throughout. At one point the narrator writes, “You undoubtedly remember the description of the books on Révol’s metal shelf, mentioning a copy of an issue of that magazine from 1959, so you will have already guessed that the article appeared in that very issue” (p. 32). Instead of drawing me into the story, this aside had the opposite effect. Such asides were infrequent, but when they did occur I found them distracting. The narrator was not a presence that I was aware of all the time; the opposite in fact, as most of the time the narrator was in the background. Thus, when he or she appeared, it felt strange and distanced me from the ongoing story.

This distancing, which creates the illusion of watching what is happening, of being an onlooker instead of being directly involved, means that as readers we can only access the characters’ thoughts tangentially. The things we know are told to us, but with the impassivity of overhearing a stranger’s order at a restaurant. As a result, it is hard to care about the characters to the extent that the subject matter deserves. However, if one did become very involved with the serious content, The Heart would surely become a challenging and potentially harrowing read. Thus, the sense of clinical detachment evoked probably serves a useful purpose, and will, I suspect, ensure a wider readership.

Each sentence in The Heart tends to be a paragraph in length, containing many phrases separated by commas. This makes the novel a difficult read at times and is potentially distracting; yet it also encourages a sense of urgency. The reading experience felt halting initially, but this sensation ceased as I progressed through the book. At the outset I found myself stumbling and searching for parts of speech to make sense of some of the sentences, but there came a point later in the book when I found myself unable to put it down.

There are two versions of the novel translated into English from the original French: for the United States it is titled The Heart, and for the United Kingdom Mend the Living, which is a more direct translation of Maylis de Kerangal’s original French title Réparer les vivants. Mend the Living was nominated for the Man Booker Prize. The US reader will have difficulty with Mend the Living, however. For example, in Mend the Living, as Simon and his friends are getting ready to surf, they are said to have “liquid rhinitis, sleep with your clothes on.” In The Heart, it says they have, “runny noses, slept-in clothes.” This type of difference exists between the two translations throughout. The end of Mend the Living is as exciting as The Heart, but elements of the writing will limit its appeal to the American reader. Thus, for this reader, Sam Taylor’s translation was a more satisfactory read.

In terms of the Medical Humanities, The Heart is an illustrative example of the arts interacting with medicine. The reader witnesses doctors wrestling with complex ethical issues such as how far to push the parents to donate Simon’s organs, decisions around to whom his organs will be donated, as well as the reality of the organ removal surgery that ends his life. The reader also observes Claire’s Méjan’s difficulty coping with the fact of receiving the heart of someone who has died, as well as her transplant surgery. All these issues render The Heart a compelling read.

Overall, The Heart is a gripping novel. Although we know at the outset that Simon will die, this fact does not detract from the extent to wish it engages the reader. The book is not without its faults. The reading experience may indeed have benefitted from a shorter sentence structure, and from a more in depth delving into the characters’ minds and thoughts. Notwithstanding, the narrative that underpins the novel remains intriguing and engaging. The Heart is particularly recommended to readers of Medical Humanities.