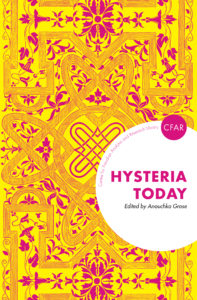 In the first edition of Diagnostic and Statistical Manual of Mental Disorders (DSM-I) published in 1952, the American Psychiatric Association removed the term “hysteria,” implying that the term was no longer relevant to the medical community. However, Hysteria Today notes that while the term is no longer in common use within the medical field, the symptoms still exist and have been categorized under a variety of other illnesses such as “conversion reaction,” “hysterical neurosis (conversion type),” “conversion disorder,” and “histrionic personality disorder” since the establishment of the DSM.

The editor of the book, Anouchka Grose, who is a member of the Centre for Freudian Analysis and Research as well as an author of numerous novels, chose current practicing Lacanian psychoanalysts to present ideas about hysteria because of their first-hand experience. Relating these theories to real people’s lives within the clinical setting, these Lacanian psychoanalysts present a cohesive, well-researched, and informed view of some of the ways to rethink hysteria in contemporary society.

This book provides the reader with an intelligent and informed discussion from various perspectives, relying heavily on case studies and true experiences from the authors on hysteria through their work in clinical settings. It is broken up into seven chapters, all of which are deeply rooted in Freudian and Lacanian theories about hysteria. While these sample case studies and concepts about hysteria provide clear explanations of Freudian and Lacanian theories, the text will most benefit students and scholars already familiar with the concepts, expanding Freud’s and Lacan’s works to artifacts and case studies in our contemporary moment in productive ways.

The text opens with an introduction by the editor, Anouchka Grose, who details the history of the term hysteria and provides relevant background knowledge into the various ways the term was used along with the treatments prescribed for the affliction. One of the salient points she makes is that “hysterics have always found a way to attack the status quo” (xxix) and that “‘Illness’ offers a form of resistance” (xxix). This brief but dense introduction provides an entryway into the valuable discussions provided in the remainder of the book, although there are no chapter abstracts included in the introduction.

In the first chapter “Hysterics Today,” Leonardo S. Rodríguez discusses the importance of subjectivity and treating the hysteric as a subject, “not as machines of production and consumption” (21). He notes the important role hysterics play in contemporary society, stating that they have “preserved the value of human desire” (23) and provides various case studies­–both from his own clinical experiences as well as from Freud and Hanns Sachs.

Chapters two through four take a concentrated look at the diagnostic and discursive utility of the term “hysteria” across time. The second chapter, “Hysteria Today,” is written by Darian Leader, a renowned psychoanalyst who is noted in the acknowledgements as suggesting the idea for this book. Outlining three points of diagnostic confusion in hysteria-–Other Minds, the Other Woman, and the Other Body–he suggests that it is not the historical aspect of hysteria that can interpret the configuration of symptoms, but it is the “space of hysteria” that can define the subjective division within hysteria diagnoses.

In the third chapter, “Beyond Queer?,” Anne Worthington provides an interesting blend of both psychoanalysis and queer theory to discuss hysteria in today’s post-psychoanalytic world. She provides a well-researched conversation about how psychoanalysis and queer theory can work together in various ways to provide further insight into the questions that arise out of hysteria, citing notable theorists such as Rosemary Hennessy and Judith Butler.

Chapter four, “Necessity and seduction: a section of hysteria,” written by Vincent Dachy, questions the necessity of keeping the term hysteria in discursive practices. He ends his brief chapter with a slightly confounding but creative schema “answering” the question of “who wants to do without” the term hysteria. He is also the author of the final chapter, “…As if I did not know… (Allurement)” which seems to not quite fit with the rest of the research-based essays, but provides a creative approach and interpretation of hysteria. He lists a series of questions out of a fictional “What kind of woman are you?” quiz, along with answers, but leaves it up to the reader to interpret how a creative endeavor like this works within the larger context of the book.

Geneviève Morel brings hysteria into the world of young adult novels in chapter five, “Fifty shades of literary success: the vampire’s appeal,” delivering a compelling chapter which relates hysteria to the young adult vampire craze and compares the Twilight series with the Fifty Shades of Grey trilogy. Her analysis is rooted in Freud and Lacan, but she provides a short sociological perspective on the young adult novels as well, adding a more comprehensive view of how the novels cope with sexuality, the Other, and feminine desires. Morel ends her chapter focusing on the reasons why the Fifty Shades of Grey trilogy was so popular, citing a “liberating effect” for women who read them as one of the main reasons for their success.

In chapter six, “Hysteria, a history,” Collette Soler discusses how hysterics are constantly creating stories, whether real or imagined, and those stories are told through the mouth as well as through the symptoms expressed. She remarks on Lacan’s view of hysteria as a “specific type of social bond” (86) that has three major elements of symptoms: “the hysteric, the other, and the other’s symptoms” (94). Throughout this chapter, Soler provides an interesting perspective of the hysteric and their relationship to society through well-researched analysis and case studies, mainly by Freud and Lacan.

In summary, this book presents a number of different arguments about how our view of hysteria has changed throughout time and details approaches in thinking about hysteria in today’s society. Although it strictly describes hysteria from a psychoanalytic perspective, this book is an excellent resource for anyone who is interested in hysteria or psychoanalysis. The variety of topics covered in each chapter are different enough that there is little repetition, but also gives a full scope of hysteria from a psychoanalytic perspective. This book adds valuable insight and extends the scholarship of hysteria into contemporary society, highlighting its history but also acknowledging the way hysteria is viewed today.