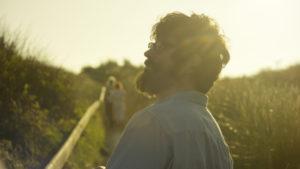 Seeing blindness in the eye:

Literary work exploring visual impairment and blindness has always been rewarded by great critical reception–All the light we cannot see winning the Pulitzer Prize in 2015 (https://en.wikipedia.org/wiki/All_the_Light_We_Cannot_See), and Blindness by Jose Saramago (https://en.wikipedia.org/wiki/Blindness_(novel) rewarding its writer with the Nobel Prize in Literature in 1998.

Documenting his experience with visual impairment, the late Emeritus Professor of Religious Education, John Hull (1935-2015) used audio-recordings since 1980, the year he lost his eyesight, to document what it means to be blind. His autobiographical recordings were published in the book Touching the rock: An experience of blindness in 1990. The film Notes on Blindness uses those recordings lip-synched by professional actors to recreate John Hull’s experience in one of the most poignant films to date in 2016. Through John’s words–‘I am concerned to understand blindness, to seek its meaning to retain the fullness of my humanity’–we hear him question eloquently the nature, perception, and impact of sensory deficits. Through his journey into understanding his ‘deep blind world’, the audience is invited to appreciate the significance of the little pleasures of life, such as the sound and smell of rain drops, and the touch of a newly born child. Using poetic references to children’s fairy tales, John Hull identifies with the blind Prince in Rapunzel, and wonders whether his tears will bring  sight back to his eyes.

John’s reflections on blindness present several themes for discussion, including mindfulness, hope, self-management in disability, identity, and family bonds. These themes are illustrated using a stunning collage of visual imagery, and a beautiful score that touches the audience’s heart and mind.

In spite of the film’s dream-like contemplation on life’s little miracles and wonders, Notes on Blindness effectively manages to portray the harsh realities of disability and the suffering endured by John and his family. His young son cannot understand what it means for his father to be blind; his mother is frustrated by having to connect with his new ‘self’, and the agony of missing his children’s smiles at Christmas. The fascinating depiction of a blind world of ‘isolation, and separation’ that drowns its sufferer in a huge flood is one of the most imaginative and moving scenes I have seen in film.

Notes on Blindness reminded me of the eminent Egyptian writer and educationalist Taha Hussein (1889-1973) who fought blindness from the age of 3 years to become the Dean of Arabic Literature (https://en.wikipedia.org/wiki/Taha_Hussein). Both John Hull and Taha Hussein had strong-willed wives who provided unconditional love and incredible support to their husbands to continue their respective academic pursuits.

Liberation comes in the form of knowledge and understanding, in acknowledging that it is futile not to accept facts and reality, and the realisation that ‘surrendering is death’. Using familiarity, predictability, finding one’s own territories, resilience and determination, along with inviting students into his world of theology, John regains control of his personal and professional life.

A great message that the film presents is the fact that ‘medicine as we know it’ cannot provide the answer to everything; the power of faith and spirituality are key to well-being and peace in humans. ‘Faith is a shield against the ups and downs of human life’.

‘Coming to terms with disability’ is an understatement in terms of describing Notes on Blindness. The film is an exciting journey into the world of a ‘pioneer thinker’ who ultimately ‘saw blindness’ as a gift to understand his world and the world around him. In 2003, John Hull was awarded the ‘Global love of life’ award for his international contribution to disability.