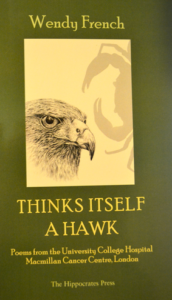 Review: Thinks Itself A Hawk, Wendy French, The Hippocrates Press, 2016.

On June 30th this year, I headed to University College London Hospital (UCLH) Macmillan Cancer Centre to listen to Wendy French read from her new poetry collection Thinks Itself A Hawk. As I approached the revolving doors in the middle of the wide glass frontage, a woman was leaving the building via the doors’ slow spin. She was wearing a headscarf, and carrying several plastic bags of what looked like shopping or bundled belongings. She was alone. She looked tired. She looked sad. And she looked ill. I have spent a lot of time in hospitals, but I have never come close to cancer. As the doors ejected us in opposite directions it began to dawn on me where I was going, and what I might see. My naivety overwhelmed me. I thought I was going to a building about cancer, not a building that contained it.

In 2014, Wendy French became UCLH’s first ever poet in residence at the Macmillan Cancer Centre. To quote from the foreword to Thinks Itself a Hawk, French’s resulting book, ‘the residency’s intention was to extend access to poetry and the spoken word and assist with improving patients’ well-being.’ French ran weekly creative writing groups for patients and wrote her own poetry in response to her time spent at the centre.

Throughout the book there are many references to walking and movement and ‘openings’ – the paths our lives take. An early poem in the collection is titled Cancer’s Daily Walk. Cancer itself ‘will walk in the town, in the city,//enter St. Paul’s when doors are open,/will walk……where its feet take it.’ But eventually the cancer enters ‘distracted bodies/whose cells are greedy for change’ and then all routes will lead to those revolving doors. French is there to document the process of arrival as people ‘try to shake off//their fears as they shake/their coats from the rain.’ (The Waiting Game)

Cancer’s impact on daily life and family relationships is all studied here. A poignant stanza in Today’s Appointment shows how family ‘outings’ have been transformed with ‘a wave of a dark wand’. Rather than trips out with picnics the sick now carry ‘bags of medication, nebulisers/in a field of white coats.’

In an environment at times harrowing and bleak, French is able to show us the real people who live with cancer. French sees the blatant effort needed to survive – ‘blood is exchanged like currency’ – yet we can also tell French got extremely close to these people. French respects them, utterly, as do the medical staff, but French is able to give them something not always prescribed. She gives them time. ‘We sit together not talking but dawdling…’ (In the Wood). ‘She tells me that pain is unpredictable/but there’s refuge in books and music.’ (This Girl).

French accepts there is a world inside the centre, and a world outside it. Referring to a tunnelled walkway that connects the Macmillan Centre to the rest of UCLH, French writes ‘down here…time is marked differently…We know we are unique we hold our heads high/and picture the outside.’ (Because)

Illness can cut people off from the ‘real’ world, but French is keen to show that the Macmillan Centre does not just house patients. Behind its doors are patients’ relatives, clinicians, volunteers, ambulance drivers, catering staff, Kingsley the ‘concierge’ – everyone is accounted for, and illness feels less isolating as a result. I remember hearing the broadcaster Andrew Marr in a radio interview about his stroke say that illness is nothing to be ashamed of. French’s poems take the shame away from suffering by scattering light on everyone involved. In Mammogram, a witty but never crass depiction of a medical examination, we focus on a list of apologetic utterings from the clinician: ‘Unfortunately I have to ask you to put your breast here/Unfortunately this may hurt for five seconds/Unfortunately we have to do this five times’. To see the appointment from the medic’s perspective highlights issues of identity in the book. The repetitive use of ‘unfortunately’ hints at the ‘human being’ behind the façade of ‘doctor’.

The latter section of the book concentrates on the story of Zipora, aged 66 when French first met her, and suffering from aggressive ovarian cancer. Zipora died during French’s residency. Before her death, Zipora shared much about her life as a Jewish woman coming from what the book’s blurb describes as ‘the darkest days of the twentieth century’. It is a very moving sequence, interspersed with letters written by Zipora to her mother. These letters were never sent, but shared with French, and French mirrors each letter with a poetic response.

Guy Noble, Arts Curator at UCLH, writes of French’s work “It touches on the challenges faced by people living with or facing a cancer diagnosis, and reflects upon the “everyday” which perhaps many of us overlook.’ I agree with Guy’s statement, but something we also overlook is that severe illness can define a person. We have to remember that there was a whole life before illness set in. Zipora’s story is a valuable addition to the book, as we learn of such a life. Through both French’s voice, and Zipora’s, we discover a family’s lineage fractured by war, a child orphaned by the age of two and raised in a kibbutz, a marriage not always happy – it’s all survival of a different kind. French’s poems reflecting on Zipora’s story are tender, wise and considerate, and we can only be grateful French was there to record it.

Thinks itself A Hawk is a moving, candid, illuminating and necessary collection. We are drawn to look closely at illness and suffering, the poet never once shying from the awfulness of things. But there is gentleness too. Reading the book is like having French push open a door, beckon us, and with her arm around our shoulders, she tells us to look. And all the time we’re looking, French is there, watching with us. She is the poet, the observer, the chronicler and the guide.