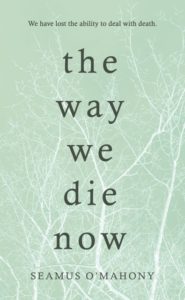 Perhaps the first and most important thing to say about this book is that it’s a joy to read. I started it on a flight from Dhaka to Mexico City when I was exhausted, but quickly I was deeply engaged and read it for the last two hours of the flight. When I was eating alone I chose it rather than my E M Forster novel. “But isn’t it depressing?” asked a friend. “Not at all,” I answered, “it’s a joy.” Most books a medical journal sends you to review may be packed with wisdom, but they are a labour not a joy to read. (I might add, as a committed Kindle reader, that the book is also physically beautiful, even including a ribbon as a bookmark, a splendidly old fashioned delight.)

Seamus O’Mahony has written the book using his own extensive experience of people dying in acute hospitals and the experiences of friends and family, but the best parts of the book may be his critical accounts of thinkers—like Phillipe Ariès and Ivan Illich—who have gone before and his witty analysis of the deaths of various celebrities, including Susan Sontag and Christopher Hitchens, both sceptics who fought death beyond what was sensible.

I hope that when I die that I have a doctor like O’Mahony to look after me, a doctor who is deeply conscious of the many failings of medicine and his own fragility. He tries all he can to avoid The Lie, giving the false impression that a dying person is not dying, and he calls together patient, relatives, and nurses to have the Difficult Conversation, the discussion when he tells patients that they are going to die. “It is much easier,” he writes, “in the middle of a busy clinic, to order another scan than to have the Difficult Conversation.” And “The entire modern hospital system conspires against those doctors willing to have this dialogue: the relatives, the chaos and noise of the environment, the techno-juggernaut of modern hospital care, the customer-friendly doctors who are happy and willing to dole out false delusional hope, and sometimes the patients themselves, who may not want to hear what the doctor has to say.”

The last clinical medicine I did was in an oncology ward in New Zealand, and I was left feeling that I’d completely misunderstood my medical education. I thought (and this was 1978) that patients with metastatic cancer, most of those in the ward, were close to death. But nobody mentioned death. The patients were all making plans for the future, the doctors were irrepressibly optimistic. O’Mahony “confesses” that he is an oncology, “schmoncology” “apostate” and quotes the Lancet Commission that “cancer treatment is becoming a culture of excess.” (The use of religious words is important because O’Mahony, brought up as a Catholic, agrees with Illich that modern medicine is becoming a global religion.)

The core of O’Mahony’s argument is that death is a bloody business and always will be. It is, as Henry James calls it, “the distinguished thing” that cannot be tamed or controlled, and the concept of a “good death” is a fantasy dreamt up by palliative care physicians, who offer deluxe dying to the few. Most people die in acute hospitals, which have become “a dustbin for all sorts of societal problems, not just dying” and are places of “filth, torture and death, a sort of antechamber to the tomb.” Dying well in such places is virtually impossible, and anyway “The needs of patients seem to come a poor second to those of the staff and the institution….much of modern medicine is characterized by a culture of excess and dishonesty, and this culture ill serves the dying.” People are poorly prepared for dying, and even the fashionable idea (of which I’m a victim) that “To philosophise is to learn how to die” is so much nonsense. None of us know how we will react when we learn we are close to death, rendering advanced directives absurd. And the move to assisted dying is a vain attempt to strip death of its “awesome grandeur.” Doctors, he complains, are “the whipping boys for our inadequate understanding of how we die.”

E M Forster would seem largely to agree with O’Mahony: on the day that I read The Way We Die Now I also read this in Howard’s End: “Sane sound Englishmen building up empires, levelling all the world into what they call common sense. But mention Death to them and they’re offended, because Death’s really Imperial, and He cries out against them for ever. Death destroys a man: the idea of Death saves him. Behind the coffins and the skeletons that stay on the vulgar mind lies something so immense that all that is great in us responds to it. Men of the world may recoil from the charnel house that they will one day enter, but Love knows better. Death is his foe, but his peer, and in their age-long struggle the thews of Love have been strengthened, and his vision cleared, until there is no one who can stand against him.” [If like me you didn’t know the meaning of “thews” it’s “the muscles and tendons perceived as generating strength.”

Wisely, O’Mahony doesn’t venture into love, but I think he’d be sceptical of the poetic notion that love can conquer death.

O’Mahony is a “doctor’s doctor” insofar as he resent the intrusion into the doctors’ space of lawyers, politicians, managers, evidence based medicine, guidelines, personalised medicine, narrative medicine (“which provokes mockery and contempt for its smugness”), shared decision making, informed consent (“a legalistic fantasy”) and worthy but empty platitudes from royal colleges, medical schools, medical journals, and the like. He believes, for example, that there is no good way to break bad news, although he concedes that there are bad ways, which does mean that there are better, if not good, ways. Medicine has, he believes, become a service industry rather than a profession. He seems as well to be in constant battle with patients’ relatives insisting that every last thing be done for their dying relatives—but he recognises that this folly comes not simply from families but from medicine and doctors having helped create unrealistic aspirations. He quotes Kieran Sweeney, a doctor who wrote about being diagnosed with mesothelioma: “When is enough enough? This will be the defining question for the next generation of practitioners.”

He raises but does not explore what medicine is for, writing “I obstinately cling to the notion that a doctor’s role is limited: our job should be the treatment of illness.” Are doctors not to be about promoting health and preventing disease? And what about relieving suffering? Some argue that that is the true role of the doctor, recognising that suffering and illness are not the same thing. Taking O’Mahony’s notion literally would imply, which he surely didn’t intend, that once the doctor could no longer treat the illness (not the patient, note) he would hand over the dying person to somebody else. In fact, he believes, as I do, that caring for the dying patient is the job of all doctors not just palliative care physicians. Perhaps he can explore what medicine is for in his next book.

“The default setting of modern medicine is full intervention,” writes O’Mahony, “unless you are instructed otherwise.” This might be the starting sentence for a chapter arguing in favour of advanced directives and assisted dying, but in fact he’s strongly against both. His argument against advanced directives is simply that we cannot know how we will feel about dying until we arrive at the day when we know it’s close, so an advanced directive is meaningless. I have an advanced directive which I’ve emailed to my wife and children, and like most doctors I think at this stage that I don’t want anything heroic. I doubt that I’ll have the courage to forego all treatment like Ivan Illich, but I find the prospect of morphine and whiskey much more attractive than chemotherapy. I accept that I may think differently when the day comes, and if I’m conscious and in my right mind then the advanced directive won’t be needed. If, however, I have, say, a stroke, then I may well not be conscious. In those circumstances it is what I think now that is relevant—even if I would have thought differently if conscious.

His argument against assisted dying seems to be an objection to control. He does not rehearse the arguments for and against assisted dying but rather objects on almost poetic or religious grounds. It is an affront to “the distinguished thing” to try and control it, and people are behaving like God in trying to control death. He writes almost cruelly about Marie Fleming, an Irish “right to die” campaigner who took her case to the Supreme Court and became “something of a national heroine.” She had, he writes “an obsession with control” and her time in court “gave her ‘the voice she always craved.’” Had she succeeded in her case then “she would have altered forever the way in which I practice my profession.” O’Mahony may retire before it happens, but it seems to me that assisted dying is going to become routine eventually just as abortion has. We can trace its steady appearance around the world, including most recently in Canada.

I’m not sure why O’Mahony should object so strongly to control. I imagine that he is in control of most of his life–and very glad that he is. He was presumably in control of getting married, choosing his profession, and determining how he would spend his spare time and energy. The problem seems to be with trying to control death—partly because it never can be controlled. We will all die—and thank goodness that we will—and we can’t control that, although many are trying. But we can potentially control how we die. O’Mahony does not write about suicide, but presumably he accepts its legality. He’s no doubt read Hume’s famous essay making the case for suicide. There are several arguments against assisted dying, but I don’t accept O’Mahony’s argument that trying to control death is unacceptable.

O’Mahony writes approvingly of “tame death,” a termed coined by the French historian Phillippe Ariès. In pre-industrial Europe tame death was characterised by “indifference, resignation, familiarity, and lack of privacy.” None of those—except perhaps resignation—are likely to return, and O’Mahony thinks that we are unlikely to be able to fashion a secular version of tame death—because “death is tamed by ritual.”

But is he right to be so sceptical? He’s surely right that death in an acute hospital is unlikely ever to be anything but mostly bad. But does death have to happen in hospital? And does death have to belong to doctors caught up in what he calls “the madness…[of] much of modern medicine”? O’Mahony advises that “A wise person needs to acquire and treasure an amicus mortis, one who tells you the bitter truth and stays with you to the bitter end.” That amicus mortis could be a doctor, but it need not be—and even if is the doctor does not have to be in the hospital. We are seeing the emergence of doulas for the dying, lay people and a modern version of amicus mortis.

It’s a pity that O’Mahony does not write about the social movements—like Dying Matters in England and Good Life, Good Death, Good Grief in Scotland or the community programme in Kerala, India—that are trying to bring death back into life and demedicalise it. Perhaps he would be scornful, but, as his book convincingly shows, doctors have made a mess of death—perhaps lay people, assisted by doctors, can do better.

'From disaster, miracles are wrought: a narrative analysis of UK media depictions of remote GP consulting in the COVID-19 pandemic using Burkes pentad

Be still, my beating heart: reading pulselessness from Shakespeare to the artificial heart

Before compassion: sympathy, tact and the history of the ideal nurse