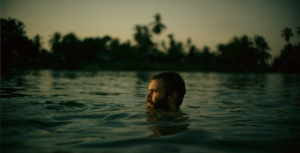 Released on DVD and digital download on 18th July 2016

Doctors and crimes of professional misconduct have been the focus of films such as ‘Coma, USA, 1978’, and ‘Shutter Island, USA, 2010’, while  doctors volunteering in NGOs in troubled zones were the subject of films such as ‘Sleeping sickness Germany, 2011’ and more recently ‘The last face, USA 2016’.

‘River’, a new Canadian film, combines the two themes in its storyline; John Lake ‘Rossif Sutherland’ is an American volunteer doctor in Laos who accidentally kills an Australian citizen in a drunken rage. In his attempt to flee the crime scene, John goes through a harrowing journey across the Mekong River. He tries to get the support of his fellow doctors in the NGO; one of them, Dr Stephanie (Sara Botsford) faces the moral dilemma of whether she should be a whistle-blower and report him to the authorities or should help him escape, while another doctor Douangmany (Douangmany Soliphanh) takes advantage of John’s desperation and uses him as a drug-mule. The loopholes in the legal system between Thailand and Laos give John an opportunity to escape prison. Struggling with his professional role as a doctor who should be saving lives, but an infallible human being at the same time, John approaches the American Embassy in Vientiane for help.

Public interest in doctors’ criminal offences fuelled the media exposure of extreme cases such as the notorious Harold Shipman, and the recent news of Dr Pramela Ganji who was convicted by New Orleans jury in a 34.4 million fraud scheme (1).

The film raises serious questions about the ability of the legal system to exercise ‘equity and fairness’ when operating in a foreign environment such as Laos that is not accountable to regulations set by Western professional bodies. The requirements set by the General Medical Council (GMC) and the British Medical Association (BMA) in England are clear in mandating a ‘code of conduct and practice’ that a doctor should declare a criminal conviction (2, 3).

In addition to its exploration of accountability and violations in healthcare professionals, the film works extremely well as a gripping action thriller winning the best film award at the Academy of Canadian Cinema and Television. Rossif reprises the role of a doctor in turmoil following in his father Donald Sutherland’s footsteps who played a doctor in the cult comedy MASH (USA, 1970).

‘Whistleblowing’ is another thought-provoking theme the film raises; Rodulson argues that reading and appreciating Homer’s the Iliad can support medical students’ understanding of ethical dilemmas (4). ‘River’ achieves a similar feat by portraying a challenging ethical and moral situation where a doctor is ‘trying to do the right thing’.