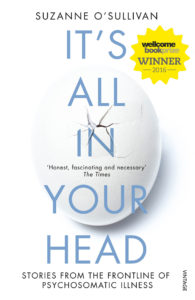 The very subtitle of the book makes one nervous: “stories of imaginary illness.” If there is one phrase that psychosomatic patients – who have symptoms without lesions ­– do not want to hear it is that their problems are “all in their heads.” Even though O’Sullivan may use the phrase ironically, it does take us back to the days when discovering organic causation was the Mecca of medical practice and psychiatry was left to “the shrinks.” Of course things are more complicated, and O’Sullivan, a neurology consultant at the National Hospital for Neurology and Neurosurgery knows this well. The book does make some finer distinctions so that “all in your head” doesn’t come out and hit us in the face. But still, O’Sullivan says that “psychosomatic refers to physical symptoms that occur for psychological reasons . . . How many are aware of the frequency with which our emotions can produce serious disability where no physical disease of any sort exists to explain it?” So in other words the origin of such symptoms is clearly psychological. These patients amount, she says, to fully a third of the cases seen in general practice and in neurology.

The book is a kind of odyssey of patients O’Sullivan has seen whose problems seem to have been caused by mental distress – a tour interleaved with explanations of historical figures such as the Parisian neurologist Jean-Martin Charcot, who once peopled this scene.

O’Sullivan has gone to such lengths to obscure the patients’ actual identities that one is never entirely sure whether the “Paulines” and “Matthews” that parade through these pages are more fictional than real – though their complaints are real. And O’Sullivan, it must be said, writes beautifully, a low-key golden flow of prose that makes the book simply a good read. There are no references. No authorities are invoked. This is the author, a veteran neurologist, speaking to us from the heart.

But is what the heart says true? How reliable is her analysis that psychosomatic symptoms are “physical symptoms that mask emotional distress”?

Right off the bat, there are problems with this stress-causes-functional-illness model. There are several major causes of psychosomatic symptoms, some of which get short shrift.

One, O’Sullivan tells us about classical psychosomatic symptoms that are caused by “stress” or by the emotional overlay of underlying organic disease. Her patients’ emotional woes are apparent to her in the course of many clinical interviews, and she ends up referring many of them to a “psychiatrist.” This is the most useless referral imaginable, as psychiatrists shun and fear psychosomatic patients and can usually do little for them because the patients themselves reject the whole notion of “psychogenesis”; patients usually accept such referrals only with the greatest reservation, convinced – not entirely incorrectly – that they are being turfed.

Two, O’Sullivan is silent about a huge source of psychosomatic illness, namely the phenomenon of suggestion. Patients who can be suggested into illness require no deep psychological problems, no intractable “stress,” to become symptomatic. They simply are suggestible.

A perfect illustration of suggestibility is epidemic hysteria: Sally begins vomiting and suddenly all the ten-year-olds in the schoolyard start vomiting as well. The public health authorities rush in. There is alarm in the press. An organic cause is never found but everybody is better the next day. It is an epidemic of suggestion that has invested the schoolyard.

The culture can be a source of suggestion as well, a subject on which O’Sullivan is silent. The culture can tell us that “fatigue” or “pain” are acceptable models of presenting illness, and these patients turn up in physicians’ surgeries with “myalgic encephalomyelitis” (ME), known as “chronic fatigue syndrome” (CFS) on the other side of the Pond. They do not in fact have an occult organic illness called “ME” but have suggested themselves into their chronic pain, fatigue and dizziness because the culture says those are appropriate symptoms. (And the culture has largely ceased to sanction “paralysis” as a convincing symptom – too easy to disprove with a negative Babinski.)

Three, frank psychiatric illnesses may spin off somatic symptoms. Patients with melancholic depression will light up the medical charts like a Christmas tree. Their aches and pains are legion, and disappear once the melancholia – one of the most treatment-responsive illnesses in psychiatry – is successfully treated. Catatonia shoots off somatic symptomatology, the stupors, tics and stereotypies often misdiagnosed as organic disease and the catatonia not recognized. Why does this matter?Catatonia is another highly treatment-responsive disorder, but there’s nothing “psychosomatic” about it. In medicine, therefore, the concept of psychosomatic can get one into rough psychiatric water.

It is striking that O’Sullivan sees deep sadness as a source of psychosomaticity rather than as a symptom of glaring psychiatric psychopathology. “I have met many people whose sadness is so overwhelming that they cannot bear to feel it,” she writes. Yoo hoo!  Such melancholic patients are indeed candidates for psychiatric treatment, not for repeated neurological assessments.

There is, finally, a fourth variety of apparent “psychosomatic” illness. But it is quite foreign to the other three and is usually not included in reviews of the topic. It is malingering. One rather has the feeling that some of O’Sullivan’s patients –  their gaze strictly averted from hers, their long silences – were malingerers. (She presents one.) You can’t prove that someone is not fatigued, or not in pain. But you can prove that they don’t have multiple sclerosis or another upper motor neuron lesion. So malingerers choose symptoms that can’t be disproven. And many physicians who work, for example, in insurance medicine, cast a cynical eye upon many of the complaints that O’Sullivan takes for true-bill.

How best to treat these patients? O’Sullivan has good words for a procedure that has largely passed from medicine, namely the amobarbital (amytal) interview. But it is increasingly seen as outmoded and dangerous (the barbiturates have undeservedly acquired a bad reputation, and most physicians are simply not in the habit of prescribing them).

O’Sullivan believes in letting the patients have it full blast: Your “disability has a psychological cause.” Sorry. The patients are left open-mouthed, since virtually every psychosomatic patient in the history of the world has had a profound belief in the organicity of his or her woes. And even though we have exalted “never lying to patients” to a beacon of medical ethics, in fact there are moments when a bit of evasion may prove therapeutic.

“Shahina” comes in with a contracture of the fingers of one hand. Another consultant recommends a botulinum injection. Bingo! The contracture releases instantly. Shahina is cured! Now, usually you take your therapeutic victories where you can get them. But O’Sullivan presses on. She tells Shahina that normally the botulinum works only after a day or two. “The speed at which your hand responded to the toxin makes me wonder if there is a chance that the spasm in your hand might have had a psychological rather than a physical cause.”

Shahina responds, “You think I’m mad?” No, of course not but…

This is actually a model of what not to do: throw patients into confusion with the relentless urge to enlighten them about their supposed psychological problems.

For other patients, as I have argued above, the psychiatrist is held out as the solution of choice. This is a problematic idea, and it is dismaying to see it propagated so vehemently in these pages. Psychiatrists tend to be baffled by such referrals. “This is a patient whose chief complaint is chest pain? C’mon!”

The general internist, the rheumatologist, or another neurologist should be the physicians of reference, because only they are able to build the necessary therapeutic alliance, to keep the myth of organicity semi-intact. It is this myth that patients require to retain their self-respect, while the real therapy takes places in the context of the doctor-patient relationship. What actually works is spending a lot of time with these patients and letting them tell and, if necessary, retell their stories. This is cathartic. But it is advice that is most unwelcome to many clinicians because it takes so much time.

It is not really fair for me to second-guess Dr O’Sullivan from the comfort of my armchair thousands of miles away. Physicians on the front line of medicine, at Queen’s Square and elsewhere, have to cope as best they can – and with relatives that make Himmler seem like Santa Claus. (O’Sullivan’s patience in dealing with these furies is remarkable.) The take-home message is that the book is a great immersion in psychosomatic problems. One may quibble about some of the author’s therapeutic choices but this is for the Thursday afternoon seminar room. If you want to get a head-on feeling for the clinical experience of psychosomatic patients, read this book.

Edward Shorter is Jason A Hannah Professor of the History of Medicine in the Faculty of Medicine of the University of Toronto, where he also has the academic rank of Professor of Psychiatry. Among his books is From Paralysis to Fatigue: A History of Psychosomatic Illness in the Modern Era (New York: Basic Books, 1992)