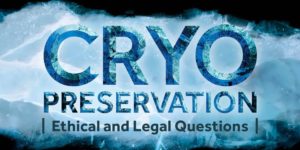 “Cryonic preservation” (or “cryopreservation”) names a technique whereby a person currently suffering from a terminal illness has their body frozen for an indefinitely long period of time, in the hope that, once medical technology has advanced sufficiently, it will be possible for them to be revived and cured.

In November 2016, the British courts heard a case brought in reference to JS, a terminally-ill 14-year-old girl (Re JS (Disposal of Body) [2016] EWHC 2859 (Fam)).  JS had carried out research into cryonic preservation, and had expressed a wish that her body should be frozen after her death, again in the hope that she might be “cured” at some point in the future.  As well as generating media interest, the case has brought into view a number of moral and legal problems associated with the status and proper treatment of the dead and the (hypothetical) not-dead-yet-but-frozen body, and with the responsibilities of others towards those bodies.  This workshop will consider those problems.

For example: what is the moral and legal status of a cryopreserved body?  Does it matter if the subject is frozen just before or just after death?  Do we need a new legal and moral category between “alive” and “dead” in which we could place the indefinitely-preserved subject?  Would it count as homicide if the cryopods were to break?  Is there a right to be revived (inasmuch as that it might count as lifesaving treatment)?  What kind of right would it be, held by whom and against whom?  What inheritance rights would be held by the subject’s heirs?  Is it rational and reasonable to want to be cryopreserved to begin with?  What would be the moral and legal status of the research on humans necessary to perfect the technique?

There is a degree of urgency to these questions. As Re JS and the existence of the commercial cryopreservation industry demonstrates, the technology is one that exists and that has captured a number of imaginations.  It is reasonable to expect that the availability of the technology will generate problems that have to be considered by the courts and by policymakers: if the technology is anything more than quackery, then lives are on the line; if it is not, the seriousness with which we should treat the technology, and societal duties to protect potential subjects and their families from false hopes need to be considered. How, then, would a just set of laws dealing with cryopreservation look?

Speakers will be drawn from across the moral philosophy/ bioethics/ medical law community, with input from academics and those with direct experience of the JS case.