Paper: 3D bioprint me: a socioethical view of bioprinting human organs and tissues

Picture this: It is twenty years’ from now and , one of your organs has stopped functioning properly or even at all. You will not need to wait in the long line of the human organ transplant list however. Instead, you can have an organ ready made for you. Bespoke design and ready to use. Who would not want this as a future scenario? While 3D printing is working with inorganic materials, the intention of bioprinting is to work with organic materials (including living cells) to create structures approximating body parts. These new forms of printing, should they be fully realised, will, it is argued, have the same revolutionary and democratising effect as book printing in their applicability to regenerative medicine and industry. Individually designed biological structures or body parts will become as available as text in modern literate societies. Not only would it make organs widely available to those who need them, but 3D printing organs would also resolve entrenched ethical problems ranging from eliminating the market in human organs and avoiding recipient rejection to averting human or non-human animal organs. Therefore, long-term 3D bioprinting has the potential to be a ‘game-changer’, no longer necessitating the need for living or deceased human donation as human organs would be printed on demand.

However, the technology is not yet at the level required to bioprint entire organs. A realistic and short-term goal for 3D bioprinting is therefore to create alternatives to animal testing. For example, bioprinting can replace animals for drug testing through organ-on-a-chip devices. Moreover, this increases the speed of drug testing via the high throughput the technology enables. A mid-term gain relates to the creation of tissue components such as human heart valves. This is especially beneficial for younger members of the population (e.g. paediatric patients) who suffer specific problems with current bio-prosthetic or mechanical heart valve options. The required tissue components are not only created from the patient’s own cells (thus reducing the risk of rejection) but also the geometry (size and shape) of the components can be customised to match perfectly with the patient’s requirements. The valves can grow with the young person growing. Unlike mechanical implants, such engineered tissue components that are 3D bioprinted have the ability to grow with the patient, eliminating the need for further operations to replace components, which are no longer suitable. Along with avoiding questions around the subversion of  the species boundaries and ending the market in human organs, practically, socially, and ethically 3D bioprinting has a lot going for it.

The question then is, what is there not to like about 3D bioprinting? Co-authorship with biomedical engineers and social scientists to establish where the current level of progress is at, as well as outlining possibly social implications that generates ethical issues is the subject of our JME article. Techno-scientific innovations such as 3D bioprinting do not constitute a uniform path of progress. Neither is there  unanimous agreement within the field itself about the best methods, medium and outcomes that can be expected when developing the technology, nor are crosscutting ethical issues established. For example, some bioengineers do not propose to use induced pluripotent stem cells (iPSCs); those that do however are proposing a paradigm shift in terms of placing them in a human body when tumours may result. In addition, despite the promises of ‘organs for all’ the likelihood is that only those who could afford it (e.g. wealthy subgroups in developed countries) will benefit. Other ethical challenges exist around ownership of the organ: how to offer intellectual property rights over a bio-object that begins from data and ends in materiality. Further, a product as  personalised as an organ made from the patient’s own cells, does not fit in current frameworks for clinical trials. To integrate these discussions into the development of 3D bioprinting, we suggest that moving from an ELSI (ethical, legal and social issues) model of governance to a RRI (responsible research and innovation) model might assist as it brings different actors and stakeholders together throughout the research and translation process. Moreover, and whatever one thinks of the ethical governance framework we propose, our mission in writing this article is to suggest that 1) having such a framework is important as is 2) bringing the ethical discussion to a wider and diverse audience. 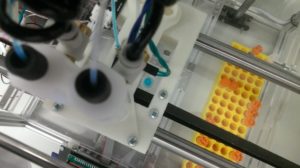