The recently concluded 71st World Health Assembly provides an unprecedented environment for action to act on climate change. Alice McGushin  & Yassen Tcholakov talk about their hopes on the WHO to exert hard diplomacy on climate change for health .

The World Health Organization (WHO) has recognised climate change as the “defining issue of the 21st century” and identifies the Paris Agreement on climate change as an important public health treaty.  Climate change was a prominent agenda in the recently concluded 71st World Health Assembly(WHA), which we attended as delegates for the World Medical Association Junior Doctors’ Network.

The WHO has recently up scaled its work on health, environment and climate change, ever since Dr. Tedros has taken over the role as the Director General of the WHO. Some concrete actions that have recently materialised, leading up to the focus in the 71st WHA were:

Air pollution from both indoor and outdoor sources causes 7 million premature deaths annually, contributing one quarter to one third of the burden of stroke, heart attack, lung cancer and chronic obstructive pulmonary disease. However, the resources allocated are not at all proportionate to the magnitude of its impacts. The WHO has outlined four areas of action: expanding the knowledge base; reporting on progress towards the air pollution targets of the Sustainable Development Goals (SDGs); capacity building of health systems; and expanded awareness raising and advocacy to mitigate the impact of climate change on health.

Biodiversity has many important linkages to human health, helping to preserve the diversity of the human microbiota, prevent non-communicable diseases and improve psychological, cognitive and physiological health. In its first report on the issue, the WHO points out that, whilst there is an urgent need for further research into the links between biodiversity and human health, there is sufficient evidence to support “no regrets policies”, such as green spaces in urban development, diversifying diets and rationalising use of antimicrobials, pesticides and other biocides. 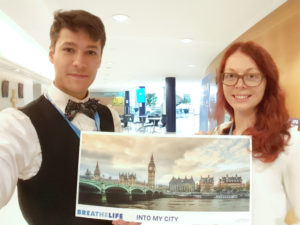 The causes and health consequences of air pollution, biodiversity loss and climate change are inexorably linked. For example, pricing polluting fuels accurately to take into account the health impact externalities could not only result in a 20% reduction in greenhouse gas emissions, but would halve the number of premature deaths due to air pollution and generate US$ 3000 billion in tax revenues every year. The WHO underscores the importance of an inter-sectoral collaboration to address the environmental determinants of health, including the Health in All Policies approach, to ensure that health is an explicit aim in decisions made in other sectors. Additionally, whilst SDG 3 explicitly addresses health, SDGs 2, 6, 7, 8, 11, 12 and 13 are also essential for health, the environment and climate change.

We need strong and urgent action to protect human health from climate change and other environmental damage. Climate change and other environmental issues had been of interest to us since we became aware of the health linkages during our medical studies, on opposite sides of the planet, in Hobart and Montreal. As health professionals, we must take responsibility , alongside the WHO, by joining forces with other sectors as well as addressing the health sector environmental footprint and creating more climate resilient health services. We look with anticipation to the increasing leadership of the WHO in this area and hope to one day see a framework convention on clean air which would further strengthen the WHO’s mandate to exert hard diplomacy on this environmental issue.

Dr. Alice McGushin studied medicine at the University of Tasmania and is a M.Sc. Public Health candidate at the LSHTM. She is Asia-Pacific Chair of the World Organization of Family Doctors Working Party on the Environment.

The impact of institutional delivery on neonatal and maternal health outcomes: evidence from a road upgrade programme in India