When I leave Clapham soon after dawn to join the Ride For Their Lives, I’m not entirely sure where I’m going, although I know it’s “at the back of King’s Cross.” I have two worries: one that I’m going to “bonk,” and another that I will be unable to keep up with the young people “with all the gear.” Until a few weeks’ ago, I knew only two meanings for the word “bonk,” but it’s the third meaning—running out of energy and being unable to go on—that is worrying me now. The preventive strategy is to “keep drinking and grazing.” I have a rucksack filled with granola bars and chocolate. I’m not much reassured when I find Granary Square and see it filled with young people “with all the gear,” including impressive bikes. At 69, I estimate that I’m at least 15 years older than anybody else and that the median age can’t be much above 30.

I’m doing this first leg because I thought Ride For Their Lives such a good idea when I first heard about it. I volunteered on the spot and then felt committed, even though doing just the first leg to Oxford (albeit 73 miles including my cycle to the start) is tokenism compared with the hugely greater demand of going all the way to Glasgow in eight days with long distances, multiple hills, and bad weather guaranteed. The Ride For Their Lives has been organised by staff at Great Ormond Street to carry to world leaders at COP26 four documents: the editorial published in over 220 health journals, the Healthy Prescription Letter signed by millions of health organisations and professionals, the latest report of the Lancet Countdown on Health and Climate Change, and a letter written and signed by many health professionals looking after children. A broader aim is to make clear how much health professionals care about climate change by putting themselves through great physical discomfort. The ride is sponsored by the Clean Air Fund and aims to highlight how seven million people, many of them children, are killed by dirty air each year. If the 30 or so people making the full trip had flown or driven to Glasgow, they would have added to air pollution: by cycling they will add almost nothing.

Accompanying the ride are pollution pods created by artist Michael Pinsky that allow people in different pods to experience the air of some of the world’s most polluted cities before experiencing clean air. The theory behind the work is that direct experience promotes change.

Granary Square is busy with people preparing to leave, others to say goodbye, a live web feed to WHO, cameramen, and confused onlookers. I encounter people I know and try to discover if there will be fast, medium, and slow groups. I want to be in the slow group, but I’m unnerved to discover there are four groups distributed at something close to random. I’m in “Silvery oaks.” Is it a tree at risk of extinction, or is the name, as my wife later suggests, a reference to my hair and age? The other groups are Hornbeam, Acacia, and Sequoia.

We are to be the first group off. Our leader assures me that nobody will be abandoned, and each group has a sweeper at the back. The entire set of around 30 cyclists assembles for a photograph, and then off we go, filmed as we leave. We are soon into Camden High Street heading north, but as we approach the Roundhouse one of our group gets a puncture. The young doctor from Wales impressively mends her tyre in about five minutes. She tells me later that she has weaned herself off bike shops. If I have a puncture, I’ll be finished.

As we come to Haverstock Hill I wonder if I’ll be able to make it all the way up. Nobody, I soon realise, would contemplate dismounting and walking, which I often do on hills. I do make it up and even to the very top past Hampstead Station. We then speed down the hill into the wastes of North London. It’s a complicated route designed to avoid busy roads. Some of the team did it on a training run a few weeks ago. Experienced cyclists tell me later that it’s crucial to train on hills, going up and down them repeatedly.

As we get to know each other, cycling side by side and chatting, a camaraderie develops. In addition to the young doctor our group includes a social worker, a paediatric anaesthetist from Glasgow, an IT specialist on a bright orange, electric bike, a French doctor, and some commanding figures who I assume to be mostly intensive care doctors from Great Ormond Street. (I don’t have the same chance to talk to them as they are usually at the front and I’m usually at the back.) All but one other are going all the way to Glasgow.

The French doctor tells me that there isn’t the same level of concern about climate change in France as there is in the UK. Few doctors are campaigning, and the whole issue is, as in the US, politicised, with the extreme right playing down the issue. The country’s reliance on nuclear power means that little has been invested in renewable energy. She has never been to Britain before and came yesterday on the Eurostar with her bike disassembled and packed into a container that’s simply a large suitcase.

London goes on and on, but eventually we reach Pinner, our first stop. Bearing in mind the mantra of “keep grazing,” I eat a tomato and mozzarella pastry I don’t really want. I have a pee, but peeing becomes ever less of a problem as we steadily dehydrate. One cyclist tells us in the evening that she’s peed only twice in the day when normally she would pee 14 times. This sort of information is regularly shared as thirst, hunger, aching muscles, sore bums, and disordered bodily functions steadily eclipse other worries.

We are now cycling through the Chilterns, which the French doctor admires, and I explain to her that this is where the British prime minister has his country residence. The Chilterns may be beautiful, but its hills are at the front of my mind, associated with some dread. Eventually we arrive at our biggest hill, which thankfully is long rather than steep. I have to stop, but I walk only about 50 yards and resume. I arrive at the top before a couple of others. We then hurtle down the hill with a wide view ahead of us into Princes Risborough.

Here we have a great bonus because “Phil’s auntie” has generously thrown open her garden and house to the cyclists. She has made a gigantic pot of tea and baked both plum and strawberry jam Victoria sponges, flapjacks, and other biscuits and cakes. We sit in the garden in the sun and feel grateful to “Phil’s auntie” and presumably uncle, who doesn’t get quite the same approbation. Afterwards I chat with the social worker about Humankind by Rutger Bregman and how people feel good doing good to others. That’s partly what this ride is about.

Soon after our stop we join a cycle path converted from an old railway track for seven miles. This is the best cycling, flat with no cars—but there are lots of dogs and children. Soon after the cycle path I see a sign saying “Oxford 13 miles.” This gives me a great boost, making me think that I’m neither going to bonk nor get left behind.

We then encounter a ford, but luckily there is a raised path beside the water. We don’t have to wade, as had been threatened. Two weeks ago the road was dry. “That’s climate change,” says somebody. Soon after the ford there is another hill where I have to briefly and shamefully walk, but now we are getting near our destination. Somebody says we have less than an hour to go. I’m disconcerted that I see no road signs to Oxford, but then I’m told that we are not going through Oxford but to the north of it.

As we cycle the last few miles I’m trying to chat but losing both my sense and breath at times. We arrive at the Kidlington Premier Inn, for which I’m grateful, although arriving to a brass band outside Oxford Cathedral would have been more uplifting. It’s 4.30, and the Silvery Oaks are some of the first to arrive. Some others are two hours behind us.

The route to Glasgow is built round hospitals the gang will visit (Birmingham and Newcastle) and Premier Inns, as the inns are sponsors of Great Ormond Street. We are taken aback to discover that our rooms are not yet cleaned because of a shortage of staff. Later we discover that we can’t eat in the hotel for the same reason. I speak to the harassed manager, who has worked a 14 hour shift and is actually the manager of the Premier Inn in Swindon. This is the result of Brexit, I tell the French doctor.

As we are unable to eat in the restaurant, somebody has the initiative and skill to order 11 pizzas, which miraculously appear after about 30 minutes. While enjoying a drink and waiting for the pizzas I learn from a child and adolescent psychiatrist how thinking about death presents a problem to adolescents because our culture doesn’t want to talk about death. The inevitability of thinking about it but the difficulty with discussing it with others can lead adolescents into dark places, including excessive risk taking.

We’ve been told not to eat our pizza in the bar or restaurant, but we decide to rebel. Sadly, our rebellion collapses in moments when the manager tells us, like naughty children, to eat in our rooms. As I guzzle pizza in a room with two beds and two bikes, I learn about the Young People’s Forum (YPF) at Great Ormond Street. The YPFs, as they are known, are scaringly articulate former patients and have a real say in the running of the hospital, even being involved in appointing the senior nurse. Some of the YPFs are cycling with us. I learn more as well about the great challenges, although also benefits, in the transition the patients must make to adult care.

In the morning I watch the teams depart. I clap them away, and some bit of me wishes I was joining them, but I am, I fear, just too old. The leg of nearly 100 miles from Harrogate to Newcastle, probably in the rain, would I fear break me.

But I’m hugely admiring of those who will go the whole way, and I hope they impress on world leaders their duty to children and young people—the patients of these health professionals—to preserve the world for them. 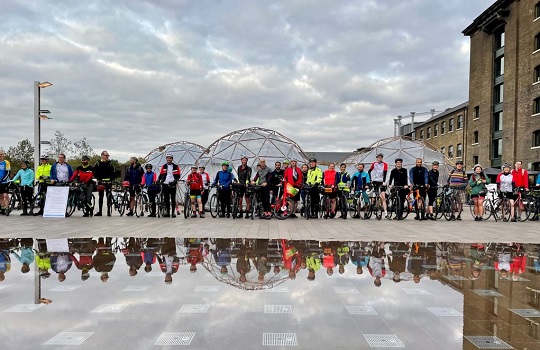 Competing interest: RS is the chair of the UK Health Alliance on Climate Change and has been involved in the editorial published in over 220 journals, the Healthy Prescription Letter, and this year’s Lancet Countdown on Health and Climate Change. He paid all his own expenses to join the Ride For Their Lives.