Last week I discussed two of three related elements of speech— dialect and accent. I now turn to diction.

The IndoEuropean root DEIK meant to show or utter. The Greek derivatives δείκνυναι to show, δεῖγμα, a sample or pattern, and δικάζειν to judge, gave us words such as deixis, deictic, and apodictic; paradigm and policy; dicast, syndic and syndicate, and theodicy.

Latin derivatives of DEIK (Table 1) included the verbs dicare, dicere, and dictare, and others formed by adding prefixes. Nouns included dictator, a dictator, dictio, the action of speaking, dictum, an utterance, dictatio, a dictated draft, and dictata, dictated lessons. 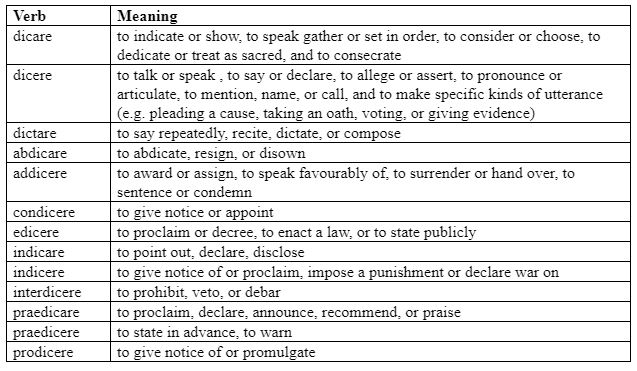 Besides diction and dictionary, we have inherited many English words from these Latin words. They include dictate, dictation, dictaphone, dictum, diktat, ditty, and ditto; addict, contradict, edict, indict, interdict, and verdict; jurisdiction, malediction, prediction, and valediction; abdicate, adjudicate, dedicate, indicate, predicate, predicament, and preach; prejudice; vendetta, vindicate, avenge, and revenge. A digit is something that points or indicates, and hence a finger. When the Tübingen physician and botanist Leonhart Fuchs, writing his 1542 herbal, De Historia Stirpium Commentarii Insignes, wanted a Latin name for the flower called in German Fingerhut, a thimble, he called it Digitalis.

Leonhart Fuchs (1501–66), from a woodcut by Veit Rudolph Speckle, used as a frontispiece in his 1542 herbal (public domain)

“Diction”, which entered English in the early 15th century, originally meant a word and later a phrase, saying, or remark. By the mid-16th century it came to mean the manner of  expression, but referring to both the spoken and written word, including choice of words, phrasing, and verbal style. It was not until the early 19th century that it developed its usual current meaning: how words are enunciated in speaking or singing. But specialized uses persist, including the range of language used by a writer, as in Shakespearean diction, or a style of usage, as in antique or Latinate diction. Aureate diction describes the overblown style typical of some 15th and 16th century poets and authors, such as John Lydgate (1370–1451) and John Lyly (1553–1606), whose character Euphues, the hero of two prose romances, Euphues: The Anatomy of Wit (1578) and its sequel Euphues and His England (1580), gave us the term euphuism, a type of affectation in writing or speech, typically periphrastic.

Whereas accent is mainly marked by how vowels are pronounced, diction is principally concerned with consonants and the extent to which they are dropped. Sloppy diction arises either from laziness or difficulty in pronunciation. It can lead to truncation of word endings, such as “yeah” for “yes”, or the dropping of medial consonants, as in “Febuerry” and “sikth”. It sometimes leads to transposition, as in “nucular” for “nuclear”. Occasionally, a vowel may be inserted (epenthesis), as in “fillum” a Scottish pronunciation of “film”.

The glottal stop is a form of diction that is normal in many languages, sloppy in some, and an occasional feature of pathology. It occurs when the vocal cords are tightly apposed and then suddenly released voicelessly. It is a feature of the velocardiofacial syndrome, and can interfere with diction even in those who have had a cleft palate repaired. It is normal in Maltese, a Semitic language, and can influence syntactic parsing. In classical Hebrew the letter aleph, which occurs at the start of many words beginning with vowel sounds, marks a glottal stop; when such words are prefixed by, for example, “va” (and), it bridges the two vowels. In Hawaiian a glottal stop can similarly bridge two vowels in place of a non-existent consonant, represented in script by an inverted comma, an ‘okina. This also sometimes happens in English, in words such as co-opt and re-educate. Sometimes the glottal stop is replaced by an epenthetic r sound when a word ending in an a is succeeded by one starting with one, e.g. in pronouncing the name of the American writer Maya [r] Angelou.

The glottal stop in English pronunciation can also arise from what is regarded as sloppy diction in, for example, Cockney and Glaswegian pronunciations of words such as butter (“bu’er”) and glottal (“glo’al”). Starting in 1963 the BBC broadcast lessons in Italian under the title Parliamo Italiano. These were later parodied by the Glasgow-born comedian Stanley Baxter in sketches called Parliamo Glasgow, in which the glottal stop often featured. To connoisseurs of the patois they were very funny. I don’t know if others found them so.