A few weeks ago I wrote about tortured phrases, phrases that are meaningless or misleading because some of the words have been replaced by inappropriate synonyms. For example, calling artificial intelligence “fake news”. Snowclones are cousins of tortured phrases, but they don’t use synonyms and they add meaning to the original.

I’ve been looking in every English dictionary I know for the noun “snowclone”, and have found it in one only, Collins English Dictionary, where it is defined as “a verbal formula that is adapted for reuse by changing only a few words so that the allusion to the original phrase remains clear”. Snowclones work like this: take a well-worn phrase and change the main ingredients, retaining the general structure. For example, “grey [is] the new black” is a phrase that first appeared, according to the Oxford English Dictionary (OED), in the New York Times in 1986, when grey clothes had become fashionable, matching the previous popularity of black ones. Since then the trope “X is the new Y” has often been used to point to changes in attitudes. The most recent example cited in the OED is “stupid is the new smart”. Duh.

Not uncommonly a myth is repeated often enough for it to become regarded as the truth. A good example is the false belief that there are many words for snow in languages of the Inuit and Yupik family, commonly known as “Eskimo”. In 1982 Laura Martin, an anthropologist, presented a paper on the subject to the annual meeting of the American Anthropological Association, and in 1986 she wrote a paper that was published in American Anthropologist, under the title ‘“Eskimo Words for Snow”: A Case Study in the Genesis and Decay of an Anthropological Example’. She traced the idea back to a casual 1911 description by Franz Boas of four terms for snow: aput (snow on the ground), qana (falling snow), piqsirpoq (drifting snow), and qimuqsuq (a snow drift). She then reviewed how the idea had blossomed though misinterpretation, culminating in a 1975 assertion in Aspects of Language and Culture by Carol M Eastman that “Eskimo languages have many words for snow”, in the context of the Sapir-Whorf hypothesis. Suddenly, nothing happened. The myth persisted. So in 1989 the linguistics expert Geoffrey Pullum published a paper in Natural Language and Linguistic Theory. He called it “The great Eskimo vocabulary hoax” and highlighted Martin’s work (“an embarrassing saga of scholarly sloppiness”). Nothing continued to happen. The myth persists.

Then in October 2003 Pullum noted, after another linguistics expert, Mark Liberman, had pointed it out to him, that the formula “If Eskimos have [N] words for snow…” was being used as a preamble to other similar claims, for instance that Germans have as many words for bureaucracy (Pullum’s example, taken from an article in The Economist). Pullum called these “bleached conditionals”, but a few days later he reported another example, taken from the movie Alien, in which the strap-line “In space no one can hear you scream” was being adapted by replacing “scream” with words such as belch, bitch, dream, drink, explode, and many others, including “blog”. A new term was needed to describe this meme, but Pullum confessed himself unable to suggest one and asked others to do so. In January 2004 Glen Whitman responded with the suggestion “snowclone”, taking his cue from the niveous Inuit connection, and the term has stuck. The linguistics literature is now snowed in with examples.

Medical snowclones are not hard to find. For example, taking his cue from the title of a novel by Gabriel Garcia Marquez, Love in the Time of Cholera, the outgoing editor in chief of the American Journal of Medical Genetics published an editorial last year with the snowclonal title “Love in the time of covid-19”; the same trope has been used in book titles and to label pictures showing couples embracing, with masks and gloves added in pencil.

A common visual snowclone plays on graphic designer Milton Glaser’s famous “I ♥ NY” logo, which he devised in 1977 and 20 years ago redesigned as “I ♥ NY more than ever”, in the wake of the events of 9/11. An amusing snowcloned version of this proclaims that “I ♥♥♥ polygamy”. And the heart can be replaced with any other image you like (Figure 1).

This prompts me to suggest some visual medical snowclones (Figure 2).

And by the way, did you know that the Inuit have 200 different words for snowclones? 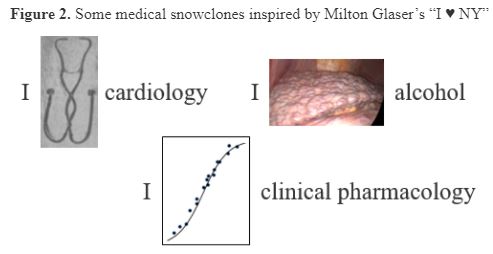