I have been looking for biomedical black swans, unexpected findings discovered by acute observation, among discoveries marked by the inclusion of relevant terms noted in the Oxford English Dictionary (OED). In the last few weeks I have briefly covered terms in pharmacology, genetics, microbiology, and biochemistry. But there is a large group of terms that I have previously simply labelled “others”, 187 of them in all. I have now classified them roughly under 37 different headings. The top ranking categories are shown in Table 1.

Table 1. The main topics into which 143 out of 273 new biomedical words first cited in the Oxford English Dictionary between 1970 and 2020 can be classified 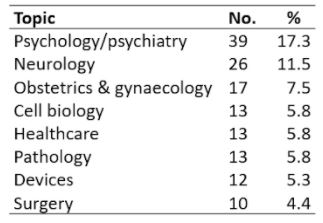 The IndoEuropean root SKAND meant to jump or climb. It gave the Latin word scandere to climb or to scan verse, climbing over its syllables one by one, and the Greek word σκάνδαλον, a trap or stumbling block, something over which you need to climb. English words that are derived from these include ascend, descend, and transcend, scan, scanner, and scansion, scandal and slander, and, via a Latin variant, scalare, scale, escalade, and echelon.

What was initially called computerized transverse axial tomography was first announced in an anonymous article in Radiology in January 1973, antedating by one month the earliest citation in OED, a paper by James Ambrose and Godfrey Hounsfield (Figure 1) in the British Journal of Radiology in February 1973. As Hounsfield described it later that year, also in the British Journal of Radiology, X-ray readings are taken at a multitude of angles, and tissue absorption data are calculated on a computer and presented as a series of pictures of tissue slices. The system that he described, applicable at that time only to the cranium, was about 100 times more sensitive than conventional X-radiology, so that variations in soft tissues of nearly similar density could be displayed. Those variations in density were originally transformed into numbers that could be printed out, later called Hounsfield numbers. 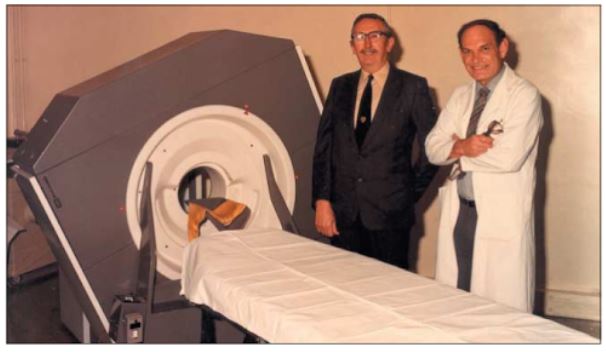 In his 1979 Nobel prize biography, Hounsfield described how the invention came about. Having served in the RAF he obtained a grant to study at Faraday House Electrical Engineering College in London. Then in 1951 he joined the company called Electrical and Musical Industries, better known as EMI, and worked on radar and guided weapons and later ran a small design laboratory. He became interested in computers, primitive at the time, and built the first British all-transistor computer, EMIDEC 1100.

Hounsfield then moved to EMI’s Central Research Laboratories, and began to design a one-million word computer store. However, his project lacked commercial viability and he was allowed to choose another project instead—exploring computerized pattern recognition, which led to the development of the EMI-scanner, as he referred to it. I first came across the term in The BMJ in August 1973, but in the form “E.M.I. scanner” in a review, by an Oxford colleague, the neurosurgeon Chris Adams, of a book called Pituitary Tumours by John S Jenkins. The hyphenated form, EMI-scanner, also first appeared in 1973.

Profits earned from the Beatles enabled EMI to fund scientific research, and although they did not fund Hounsfield’s work completely they did give him the freedom to choose his topic. It has been pointed out that an American neurologist, William Oldendorf, had invented a similar system in 1960. However, the response from a manufacturer of x-ray equipment was disappointing: “Even if it could be made to work as you suggest, we cannot imagine a significant market for such an expensive apparatus which would do nothing but make a radiographic cross-section of a head.” It took Hounsfield and Ambrose to spot the black swan.