In his book The Black Swan (Random House, 2007), Nassim Taleb wrote “history does not crawl, it jumps”. Many important discoveries, he asserted, do not come about by careful planning; they arise suddenly and surprisingly, like the discovery of a black swan when everyone believes that all swans are white. But when a surprising discovery is made it often immediately becomes obvious retrospectively and in time becomes commonplace. “Look into your own personal life,” writes Taleb, “to your choice of profession, say …. How often did [significant events, technological changes, and inventions] occur according to plan?”

Since last October I have been doing just that, by charting the biomedical words that have entered the English language since I began medical practice in September 1970, just over 50 years ago. My source is the Oxford English Dictionary (OED) (Figure 1). 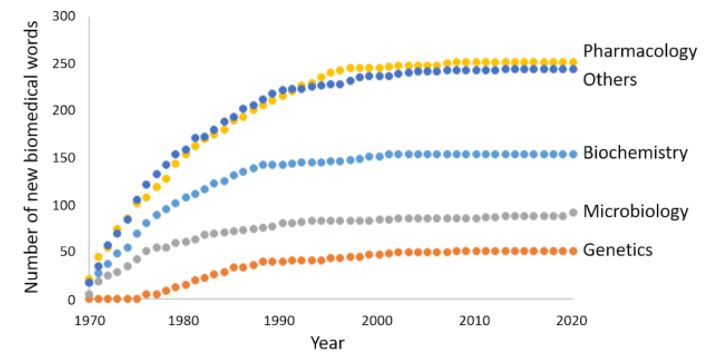 Here I shall concentrate on words relating to pharmacology, which dominated the lists from the start. The categories into which they can be subclassified are shown in Table 1.

Table 1. Categories into which the newly recorded pharmacological words can be classified 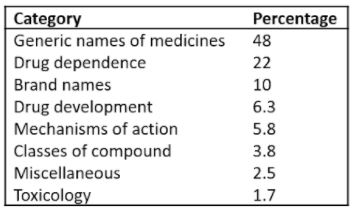 The accumulated list of words shows that Taleb is wrong when it comes to drug development—there are few pharmacological black swans. Drug development these days is a highly organized and logical affair. Typically, you start with a target, in a cell or an animal say, and look for a compound that affects it. Among the thousands of compounds that a pharmaceutical company will have on its shelves, synthesized for one reason or another over the years, there is an approximate 25% chance that one of them will hit the chosen target. It may not be very potent or effective, but a hit, however slight, will lead to modification of the structure of the compound, yielding more effective and more potent compounds, until candidates suitable for clinical trial emerge. Alternatively, in silico studies of receptor structures may predict the kinds of molecules that are likely to interact with them. Pharmacokinetic studies will predict whether the drug concentrations likely to arrive at the putative site of action will be high enough, and whether, for example, there are active metabolites that may also be effective. Medicinal chemistry will guide the choice of formulation. And early clinical trials will guide go-no-go decision-making.

During the current pandemic we have seen several unsuccessful attempts to repurpose therapeutic agents to treat covid-19. But the usual drug discovery process has been inverted. Instead of looking for likely targets, investigators have picked drugs and then hypothesized targets through which they might be effective, often encouraged by apparent in vitro efficacy, and lacking the reassurance of appropriate pharmacokinetics. This upside-down approach has resulted in failure when drugs such as hydroxychloroquine, azithromycin, ivermectin, and lopinavir–ritonavir were touted as possibly efficacious agents.

Of course, there is no guarantee that drugs that have been through a rigorous process will necessarily be successful either. Remdesivir, for example, based on a target in SARS-CoV2, its RNA-dependent RNA polymerase, was much less successful than had been hoped, because the virus has an exonuclease that repairs the damage done by inhibition of the polymerase.

Pharmacological black swans do, however, appear from time to time. The best known of these is sildenafil, which appeared in the 1995 list, and as Viagra a year later, and which was developed for the treatment of angina pectoris. The discovery that it was beneficial in the treatment of erectile dysfunction was completely unexpected.

Discovery of adverse drug reactions, which are often due to off-target effects, is a more difficult business, and they more often emerge as black swans. Witness cerebral venous sinus and splanchnic vein thromboses, rare adverse effects attributed to the ChAdOx1 vaccine against SARS-CoV2, hypothesized to be due to variant forms of the viral spike protein whose synthesis is stimulated by the vaccine, a genetically modified chimpanzee adenovirus.

The OED is limited as a source of information in this exercise. For example, of nearly 700 monoclonal antibodies, the dictionary includes only trastuzumab (1997), presumably because it is better known as Herceptin, which has a separate entry (1996). Even if entries in the dictionary were limited, say, to those currently listed in the British National Formulary (Box 1), and therefore in general therapeutic use, a major exercise would await the lexicographers.

Box 1. There are upwards of 700 monoclonal antibodies; this selection is based on those listed in the British National Formulary