Thomas Gomersall and four friends, all eight-years-old, recently organised a march to Islington Town Hall to call for action on the climate crisis. Later they organised a cake sale to raise money for charities protecting nature, and they have plans for further marches, cake sales, and other activities. I spoke to Thomas and his mother about what inspired Thomas and his friends to action, how they organised their march and cake sale, what they plan now, and what they want for the future. 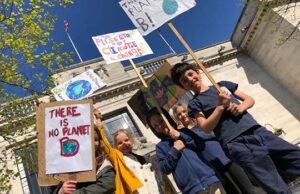 “I did my protest because I wanted to strike for the climate with my friends. I care about the climate because I don’t want all the species to become extinct, and I don’t want this house to flood. I found out about climate change in a book when I was four. I read about the strikes and Greta Thunberg.”

“Last year I was really frightened about climate change. I was reading about cities flooding, I couldn’t sleep. I knew London wasn’t near the sea, but I thought it might affect us. I worried about animals becoming extinct. [Three of us wrote an article last year about how to help a child terrified by climate change.]

I do a lot of birdwatching. In our garden I make bird feeders out of plastic bottles, and I have a little garden where I plant wildflowers. Most of my friends are as interested in nature as I am. Now I’m not so frightened. I’d always wanted to try and make a difference, but I never thought that I would actually do it.

I had a chat with my friends—Anaia, Anouk, Olivia, and Cordelia—about how we were going to organise the march, and then we told the adults at school and our mummies and daddies. My friends are worried about climate change. In my class everybody calls me a mini-David Attenborough.”

Thomas’s mother interjects that Thomas and his friends had organised everything about the march before they told their parents.

“Our aim was to get our class involved and make a difference. Some of us organised flyers that we handed round the class, and some of us made placards and stuff. We linked our march with Earth Day, and a few days before I asked our teacher if we could do something for the day. One of our teachers decided that the whole class would make cardboard placards and march around the playground. And we put flyers in the staff room.

There are 27 in my class, and they all support what we are doing. More wanted to come on the march but they couldn’t. We did the march straight after school. There were the five of us, my sister Martha, who is 5, my Daddy and Nanny. My sister thinks it’s a good idea. I was a little bit nervous when we started.”

We were a lot more nervous about it than the children, said Thomas’s mother. We thought people might not be supportive. We thought it might not actually work. I didn’t think it would happen, but the children carried us along with them. They changed what we thought. 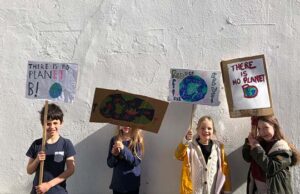 “The march to the town hall lasted about 34 minutes, but the whole march was about an hour and a half. Lots of people said positive things to us. Nobody said anything negative. They said things like “Well done,” “Hopefully your dream will come true.” People smiled at us. We stayed outside the town hall for about half an hour.

People said things like “This is what kids should be doing,” said Thomas’s mother. The children were high as kites once they had done it. We spent the next week inspired by it all.

“We all had the idea that we would do a cake sale, and we did it in our front garden. We all made cakes. We had rice crispy cakes, brownies, and cookies. We had climate banners everywhere. But we didn’t actually know whether anybody was going to come. We asked people to give donations. Everything was one pound, but one person have us £20. People who didn’t have cash on them said they would come back later, and they did.

Lots of people stopped and said things like “Kids should be doing this more” and “It’s a good thing to do.” One person said, “This gives me such hope.” We made £254, and we’ve sent it to Earth Day charities.

We will do the march again, and I think we will get more children next time. More in my class want to come. We think we might do it once or twice every two months. We might do something next on World Environment Day.

“We are going to do more things. One of our neighbours works for the World Wildlife Fund and will help us make a big event.

We will write to our MP. In lockdown my sister was eating lots of mini-cheddars, and my mummy read on the packet that it involved lots of palm oil. I wrote a letter to Jacobs saying “Stop using palm oil.” They wrote back to say their palm oil was organically farmed.

In the future I would like to see change and to see lots of people making a difference. I’d like to see less pollution, more electric cars and less extinction and more conservation of animals.

I’d like people to know what a big impact climate change has on us and I hope the future will be different.”