Surveying new biomedical words listed in the Oxford English Dictionary (OED) since 1970, I have found fewer examples each year. For example, the 1970 list contained 61 words and the 1980 list 27; in the 1990 list (Table 1) there are 12. However, the list still contains much of interest. “Nutraceutical”, for instance, which I previously discussed in a paper titled “Defining nutraceuticals: neither nutritious nor pharmaceutical”, highlighting the widespread inconsistencies and contradictions in the many published definitions of “nutraceuticals” and a term that is often regarded as synonymous with it, “functional foods”.

Here, however, I shall focus on another item in the list, “C. diff.” 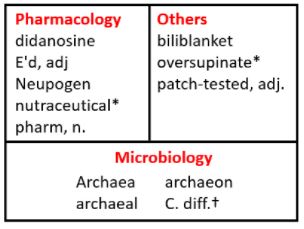 * Antedatings: nutraceutical (1989); oversupinate (1900)
The antedating of “oversupinate” is unusual, in that the word is incompletely defined in the dictionary, and a proper definition would encompass earlier examples; “oversupination” is defined as “Excessive supination of the feet, esp. when running” and “oversupinate” as “To run or walk so that the weight falls upon the outer sides of the feet to a greater extent than is necessary, desirable, etc.; to supinate excessively. Also with the feet as subject.” But the definition should have extended, as it were, to the arms, which can also be oversupinated. The earliest instance of “oversupination” referring to the arms that I have found is from 1871, in a paper by John Lyell in the Glasgow Medical Journal, “Partial displacement of the head of the radius in children” (“It seems to me that the radius somehow from over-supination catches on the adjacent ulna and is there retained”); “oversupinate” can be found in 1900: “Fractures of the neck of the radius may occur from ligamentous strain either by putting the obicular ligament [sic] on a stretch by oversupinating the forearm or by forcing the ulnar away from the radius by violent dislocation backward” (Philadelphia Medical Journal 1900; 5: 564)
† C. diff. has its own entry in the OED, as do C. difficile and Clostridium, but Clostridium difficile has somehow evaded inclusion; however, an etymological note under C. difficile tells us that it is a shortened form of the scientific Latin term Clostridium difficile, “[the] name of a species of bacterium (1939 or earlier)”

Adam Prażmowski first described the Clostridium genus of bacteria in a dissertation, Untersuchung über die Entwickelungsgeschichte und Fermentwirking einiger Bacterien-Arten (Leipzig: Hugo Voigt, 1880). A reviewer (“Dr. K.M.”), writing in the Österreichische Botanische Zeitschrift, described it as “[a] treatise, rich in new observations, …and a highly valuable contribution to our understanding of morphological and evolutionary relationships among bacteria.” Prażmowski derived the term “Clostridium” from the diminutive form of the Greek word κλωστήρ, a spindle, because of the shape of the organism (Figure 1). 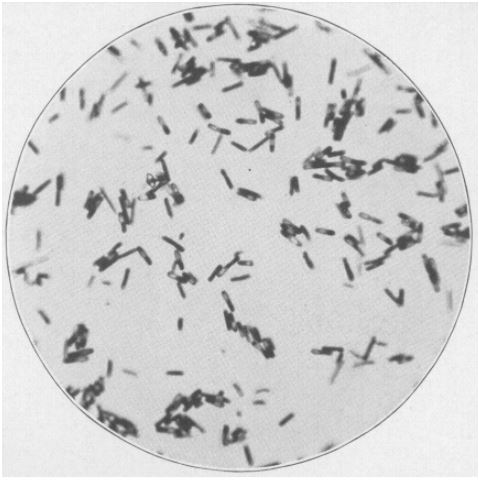 Then in 1935 Ivan Hall and Elizabeth O’Toole described an organism that they called Bacillus difficilis, because it seemed to belong to the Bacillus genus and was hard to grow in vitro, being an obligate anaerobe. It was later identified as a member of the Clostridium genus by André Romain Prévot who called it “Cl difficilis” (Figure 2), forgetting, or being unaware, that while “Bacillus” in Latin is masculine, “Clostridium” is neuter. He included C. difficile among the types of clostridia that he labelled “peu pathogènes”. Wrong again.

Figure 2. Extracts from André Romain Prévot’s review of the organisms that he considered belonged to the Clostridium genus, including “Cl. difficilis” (Annales de l’Institut Pasteur 1938; 61 (1): 78-99); since then it has been recognized, based on 16S rRNA gene sequence analysis, that many of the organisms that have been assigned to that genus are not proper members of what is now called Clostridium sensu stricto; Clostridium difficile has therefore been renamed Clostridioides difficile

Pseudomembranous colitis had been described in 1893 by John Miller Turpin Finney, before the advent of antibacterial drugs. But in 1977 it was shown that clindamycin-associated colitis in Syrian hamsters was due to a toxin-producing species of Clostridium, Clostridium difficile. It was sensitive to vancomycin, treatment with which was effective in 49 patients.

In the 1980s, when infection with Clostridium difficile became a major problem in UK hospitals, clinicians started to refer to “C. diff.”, partly because abbreviations like this are common (e.g. “strep” and “staph”) and perhaps also because they were unsure about how to pronounce the second part of the name. Might it be “dee-fee-seel” as in French? Or “dee-fee-chillay” as in Italian, for example? Neither. It’s “di-´fi-ki-lay” as in Latin, the hard c being justified by contemporary scholarship on the way in which classical Latin was pronounced.

In the summer of 2007, infections with C. difficile in UK hospitals became headline news. The BBC in particular took to pronouncing it “dee-fee-seel”. Dot Wordsworth in The Spectator (18 August 2007, page 18) took exception to this and quoted the BBC’s Pronunciation Unit, which justified its quasi-French pronunciation of “difficile” as follows: “This pronunciation is in line with the usage of the various microbiology and infection control experts the BBC has consulted. Medical Latin is commonly anglicized [sic].” “My difficulty,” wrote Wordsworth, “is with the dropping of the final vowel of difficile. When people trot out the Latin tag mirabile dictu they manage to keep the –e. The alchemists’ idea of drinkable gold was aurum potabile. If the Queen, instead of speaking of an annus horribilis, had referred to a tempus horribile, she would not have dropped the final e any more than the initial h.”

Then Professor Graham Anderson, professor of Classics at the University of Kent, wrote to The Times (15 October 2007): “[Clostridium difficile] looks like a normal piece of medical Latin, the language used for historical reasons to classify bacteria. But because the form difficile is common to Latin and French to the eye, the broadcasting media choose quite wrongly to call it clostridium dee-fee-seel and not the four-syllable dif-fi-ci-le of Latin. What is offensive is not so much the ignorance, but the fancy that one is being correct: it looks foreign, so it must have a foreign pronunciation, n’importe quelle langue. I wonder what members of the Académie Française would make of this outrageous piece of franglatine?”