Self-experimentation, or autoexperimentation, is as old as experiments themselves. I have previously mentioned the case of Daniel Alcides Carrión, a medical student, who in 1885 had himself inoculated with an extract from a Peruvian wart (verruga peruana) and died from Oroya fever, since then also called Carrion’s disease (enfermedad de Carrión). Lawrence K Altman gives many other examples in his book Who Goes First (Random House, 1987).

In his book Self-Experimenters. Sources for Study, Arsen P Fiks defined self-experimentation as “The conscious and deliberate implementation of an experiment, fully prepared in advance, done by a person on himself or herself”. It might also be defined, more succinctly, as an experiment in which the experimenter and the subject are one and the same.

In 2014 I suggested to the organizers of the Cheltenham Science Festival that a session on self-experimentation might be of interest. They agreed, and invited Barry Marshall, winner, with Robin Warren, of the 2005 Nobel Prize in Physiology or Medicine, who was in the country at the time, to take part. I therefore gave an introductory talk on Nobel Prizes won because of findings through self-experimentation. The 12 examples I chose are shown below. 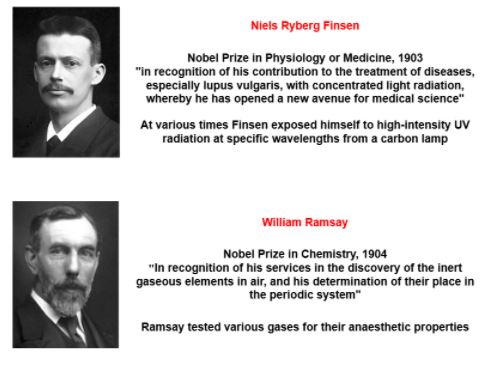 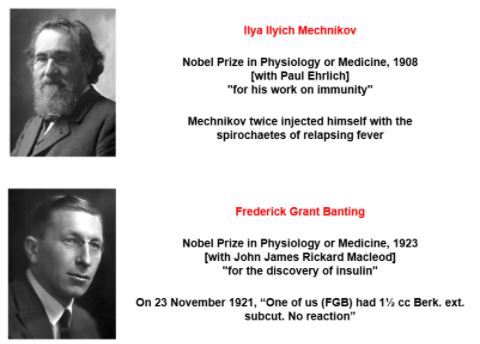 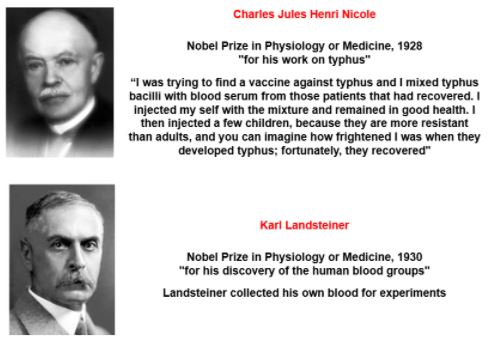 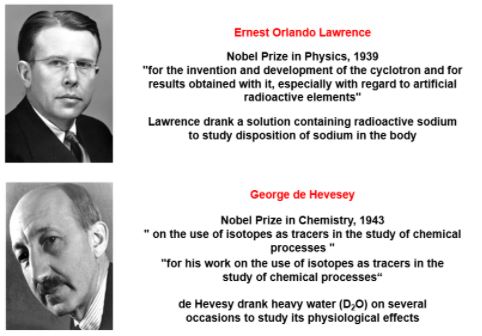 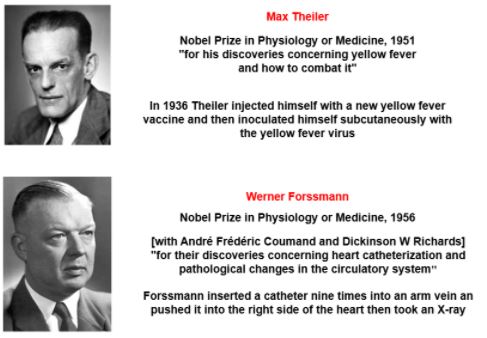 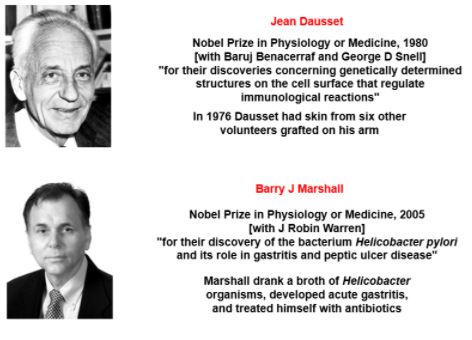 I mention all this because my survey of biomedical words listed in the Oxford English Dictionary has arrived at those first cited in 1989, and the list includes Helicobacter (Table 1). In 1983 Barry Marshall and Warren cultured the Helicobacter organism from the human stomach, where it had been previously seen but ignored. They named it Campylobacter pyloridis, but the name contained two mistakes. They had first assumed that the genitive case of the postclassical Latin word pylorus, from the Greek πυλωρός, a porter or gatekeeper, was “pyloridis”, as if it were a noun of the third declension, like “gottis”, whose genitive is “glottidis”; however, “pylorus” is of the second declension, and its genitive is “pylori”. They therefore changed the name to Campylobacter pylori. 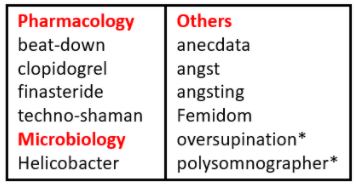 Although the organism resembled Campylobacter organisms on light microscopy, more careful studies showed that the new organism was not of the same genus and that it deserved a name of its own. The name was therefore changed again, in 1989, to Helicobacter pylori, on account of the organism’s appearance in the stomach (helical) and in vitro (rod-like).

Marshall told the story of his self-experimentation in his Nobel Prize lecture and in Cheltenham. Having failed to produce a model by infecting an animal, he decided to infect himself. He drank a broth containing Helicobacter pylori. After three days he developed symptoms of acute gastritis, confirmed at endoscopy. Helicobacter pylori was cultured from a biopsy and after 14 days he started to take antibiotics. The symptoms resolved.

The term “self-experimentation” is not to be found in the Oxford English Dictionary. The earliest instance that I have found is from 1862, although there is an earlier instance still, used in the sense of “self-reflection”, from 1859.

Self-experimentation has also been referred to variously as a “self-directed N-of-1 study”, self-tracking, self-quantifying, self-surveillance, sousveillance, personal science, personal informatics, body hacking, and, perhaps most appropriately, “extreme navel-gazing”. This type of activity is part of the so-called “quantified self” movement, in which users take advantage of modern technology, typically involving wearable sensors, to track their own functions, such as how much exercise they take or their quality of sleep. Such studies do not usually include therapeutic interventions, although they might. This differs from typical N-of-1 studies—double-blind, placebo-controlled studies to determine the effects of specific interventions in single individuals. Both of these also differ from self-experimentation.

These terms have also been confused with what has been called “personalized medicine”.

“Personalized” in this context originally meant much the same as “individualized”, in the sense of tailoring therapy to individual needs, without stipulating any particular method of doing so. The term was then applied specifically to the use of genetic information to guide therapeutic interventions, such as predicting likely effective dosage regimens or identifying individuals who would either benefit or be harmed by an intervention. Now? Well the analysis below, inspired by the style of Jules Pfeiffer, summarizes current terminology.