Among the words first recorded from 1975 in the Oxford English Dictionary (OED; Table 1) is “sinsemilla”, although it is also mentioned in Jerry Kamstra’s book Weed: Adventures of a Dope Smuggler (Harper & Row, 1974). Sinsemilla is a form of cannabis. 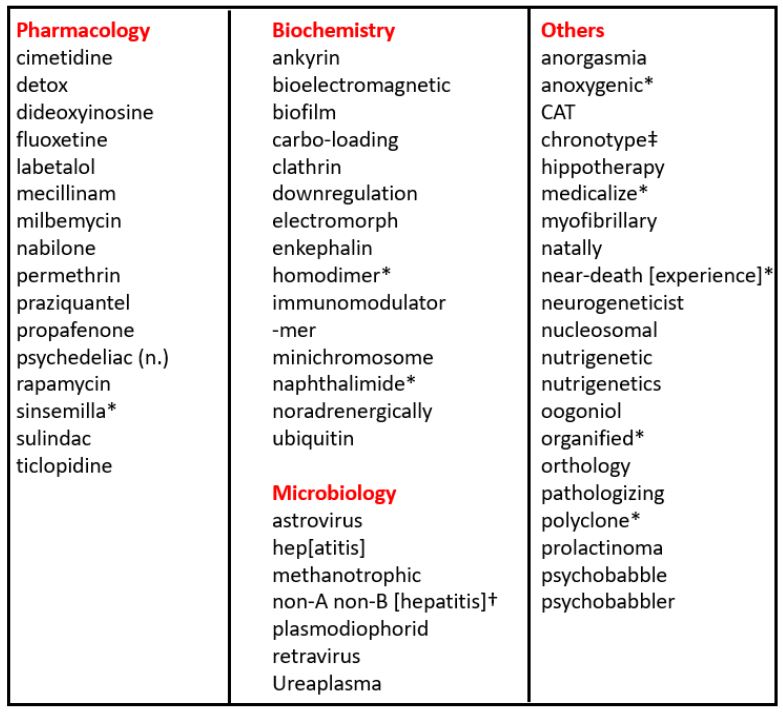 ‡The term “Chronotype” was used in the titles of certain American newspapers in the mid-19th century and later (e.g. the Boston Daily Chronotype from 1846 to 1851 and the weekly Rice Lake Chronotype, which has been published since 1874, originally by the Chronotype Publishing Company).

Herbs have been used medicinally and recreationally since at least Neanderthal times, as evidenced by pollen grains found in Iraqi burial sites, many of which are hypothesized to have been used for their medicinal properties. Medicinal plants were depicted on the walls of the caves at Lascaux, and there is evidence of the use of opium and psychedelic drugs during the Neolithic period. It is likely that cannabis was among them. Cannabis sativa and Papaver somniferum have been identified in mediaeval remains in Czech countries. Hemp was also used as a textile in prehistoric times.

The IndoEuropean root KANN meant a reed, or more specifically hemp. Tube-like structures whose names derive from this include canal and channel, cane and cannula, canister, cannelloni, cannon, and canyon. Canna is a genus of reeds and Cannabis a genus of hemp. In Greek it was κάνναβις. In his book about recreational drugs, Phantastica (1924; Figure 1), the German “father of toxicology”, Louis Lewin, suggested that it was a loanword from the Scythian and related to the Greek word κονᾶβος, a clashing noise, reminiscent of the noise made by smokers of hemp. In German, κάνναβις, via the Latin cannabaceus, hempen, became hanapaz, from which we get canvas, originally made from hemp or flax. Ancient Sanskrit gives us the name of an endogenous cannabinoid, anandamide, from ananda, bliss. There are many classical allusions to plants that could have been cannabis. Herodotus reported that the Scythians cultivated a plant whose seeds produced an intoxicating vapour when heated. Diodorus Siculus reported that women of Thebes prepared a plant beverage that had an effect similar to that of nepenthes. 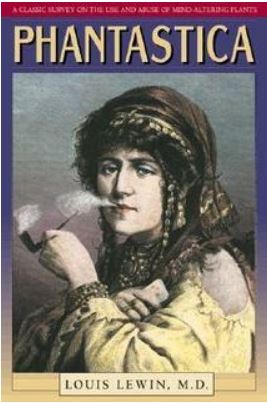 Figure 1. The cover of the 1998 edition of PHA Wirth’s English translation of Lewin’s Phantastica

Different forms of cannabis have different names. Hemp is the common name for the plant, from the same linguistic root as hanapaz. Marijuana is a dried mixture of the crushed leaves and stalks of the plant. In Hawaii it’s called takalolo, from taka = tobacco and lolo = paralysed, lazy, or feeble-minded. Ganja is the compressed flower heads. Hashish is the compressed resin extracted from the heads, and cannabis oil is extracted from it by dissolving it in alcohol. But these names are outnumbered by about 10 to one by the related slang terms (Table 2).

Table 2. Slang terms for various forms of cannabis for recreational use (main source: Neaman J, Silver C. In Other Words. A Thesaurus of Euphemisms. Facts on File Inc, 1990) 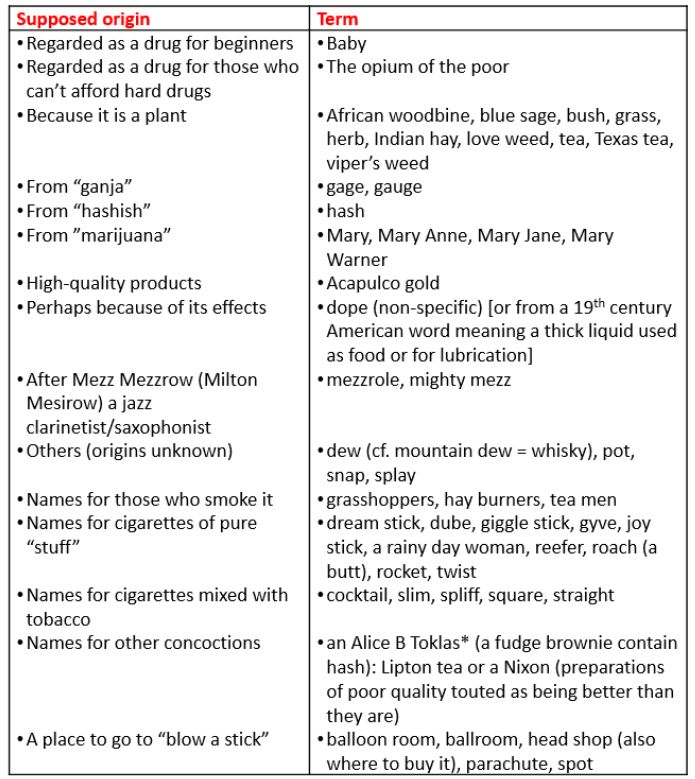 *The origin of the word “toke”, to inhale smoke from a pipe or cigarette containing marijuana, which the OED dates from 1952, is unknown, but probably nothing to do with Alice B Toklas

Male and female cannabis plants contain about the same amounts of the active ingredient, Δ9-tetrahydrocannabinol (THC). However, when the female plant is pollinated by the male, its flower heads lose their THC. In order to prevent this, it has been a long-standing practice to remove male plants from the field when they are about to pollinate. The female flowers then fail to produce seeds, and the amount of THC in the heads increases markedly. The sterile female plants are known as sinsemilla—literally “without seeds” (in Spanish sin semillas), also called sensamaya, according to Jerry Kamstra.

Different preparations contain different amounts of THC. Plants grown commercially in areas where cannabis is legal may be restricted to contain less than 1% THC. Plants that grow wild contain 1–3% and sinsemilla contains 3–6%. Ganja, prepared from sinsemilla, contains 4–8%; hashish 10–15%; and cannabis oil 20–60%, usually at the lower end of the range.

In Phantastica, Louis Lewin noted that in 1378 Soudoun Sheikouni, Emir of the Arabian Joneima, tried to end abuse of Cannabis indica by having all local plants destroyed; use of the plant increased. And when, in 1800, a French general in Egypt issued a Napoleonic edict prohibiting the use of hashish, instituted penalties for its use, closed down cafes and restaurants where it was available, and burned all imported stocks, it had as little effect. The history of attempts to control the use of recreational drugs is littered with failures.

If you have access to legal cannabis you might want to try Brian Gysen’s recipe for “haschich fudge” (sic), “which anyone could whip up on a rainy day”, given in the Alice B Toklas Cook Book. He called it the food of Paradise. It includes a pulverized bunch of “canibus sativa” (“obtaining which may present certain difficulties”). The fudge, we are told, “should be eaten with care. Two pieces [about the size of a walnut] are quite sufficient.”