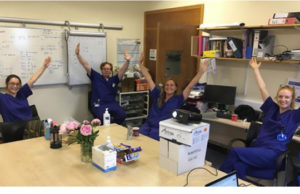 North Devon District Hospital is a small remote district general hospital (DGH), with a number of trainees living on their own. Due to a reduced support network during the covid-19 pandemic and the associated strain of the pressured working environment we wanted to create a weekly slot focused entirely on trainee wellbeing and having fun (safely). Given the likely long term nature of this crisis we decided early on that we would need to address the psychological impact on our trainees. Our main aim was to maintain an efficient and fully functional workforce through this crisis and onwards.

Once a week we met in the anaesthetic department for two hours, at the end of the working day, to enjoy a range of activities. We ran quizzes, online escape rooms (surprisingly good team building exercise) and watched films. We also used it as an opportunity to chat about our experiences, grumbles, and to support each other. The consultants often popped their heads in and were buoyed to see us laughing and joking.

We are incredibly lucky as a group of trainees that our consultant body wholeheartedly supported our endeavour. The consultants were doing resident on-calls during this period and often held our on-call bleep for ICU and theatres. Attendance was dependent on workload. The room was suitably large to allow social distancing of two metres, and by limiting invitation to the anaesthetic trainees on shift, or due to start shift, numbers were controlled and realistic for the size of the space available. Snacks were individually wrapped including—blast from the past “Capri Sun’s.” The omnipresent hand gel was provided.

Overall “Wellness Wednesday’s” have received very positive feedback and became a real highlight of people’s week. Despite loss of training opportunities, cancelled exams, personal protective equipment fatigue and social isolation, we were able to maintain a positive, morale boosting attitude among the trainees—with the focus on being kind to others and ourselves.

As we find ourselves in another pandemic surge and nationwide lockdown we would recommend other hospitals try a similar approach. The key pointers would be: finding a suitable space, managing numbers, obtaining consultant buy-in and most importantly making sure the activities were non-work related and fun!