The treatment known as photopheresis, or extracorporeal photopheresis, was first described by RL Edelson in 1984, which explains its appearance in this week’s list of words that are cited in the Oxford English Dictionary as having first appeared in that year (Table 1).

Table 1. Biomedical words (n=20) in the OED for which the earliest citations are from 1984 (out of a total of 190); I have found no antedatings of these entries 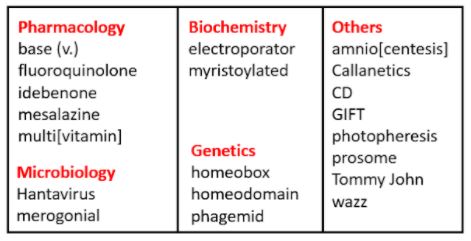 Phototherapy, the use of ultraviolet or visible light to treat skin diseases, is described in a position statement published by the British Photobiology Group, “Phototherapy for skin disease”. The main forms of light used medically are ultraviolet A and ultraviolet B. When a psoralen, a furanocoumarin, is combined with ultraviolet A (PUVA), in treating, for example, psoriasis and T-cell lymphomas, it is called photochemotherapy. When the technique is combined with aphaeresis of blood it is called extracorporeal photopheresis. It was first used to treat cutaneous T-cell lymphomas and is now used to treat disorders such as graft-versus-host disease, scleroderma, and atopic dermatitis, and after solid organ transplantation.

Take the Greek verb αἱρεῖν (hairein), to grasp or seize, to get or obtain. Add the prefix ἀπό (apo-), away from. That gives you ἀϕαιρεῖν (aphairein), to take away or remove, which gives the English noun aphaeresis. This was originally a linguistics term, meaning the omission of one or more sounds or letters from the start of a word. For example, the Latin word appendere meant to attach something, giving us words such as appendage, appendix, and appentice, a lean-to or other addition to a building. By aphaeresis, appentice gave pentice, which, by folk etymology, became penthouse, a rather more glorified addition to a house than a lean-to.

Then in the late 17th century aphaeresis acquired a medical meaning, excision of a part of the body, e.g. amputation or dental extraction. And in the late 19th century it came to mean removal of a quantity of blood, and eventually removal of blood followed by its reintroduction after doing something to it.

In plasmapheresis blood is removed, the plasma separated, and the blood cells returned. It was invented by John J Abel in 1914 as a way of avoiding the adverse effects of repeated venesection when only the plasma needed to be removed (Figure 1). Incidentally, Abel, in 1898, also coined the name “epinephrine” for what we prefer to call adrenaline. Abel described his discoveries in his 1915 Mellon Lecture [1,2]. 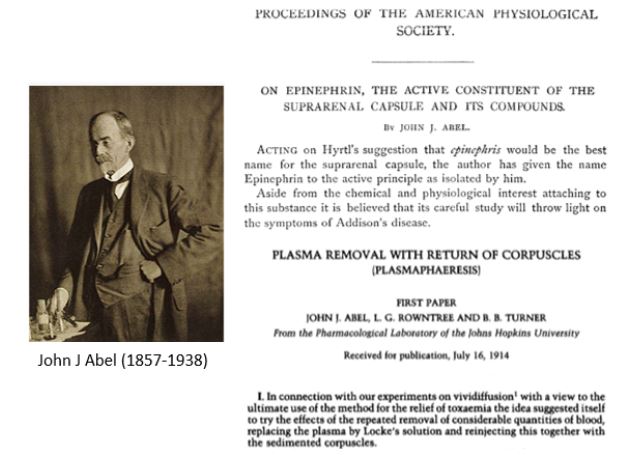 Figure 1. John J Abel. Top right: his report on an extract from suprarenal glands, presented to the American Physiological Society on Wednesday 28 December 1898 and published in the following year; bottom right: his 1914 report on plasmapheresis

In extracorporeal photopheresis whole blood is removed from the body and the buffy coat is separated and exposed to 8-methoxypsoralen (methoxsalen), which is inert. The methoxsalen is taken up by cells, activated by exposure to UV A, and binds with high affinity to DNA and other cellular constituents, particularly in lymphoid cells, leading to apoptosis and other effects. All the components of the blood are then returned to the body. The many outcomes of this procedure include macrophage activation and changes in production of cytokines.

Another entrant in the 1984 list, CD, stands for “cluster of differentiation”, describing molecules, present on the surfaces of human leukocytes, that are detected by monoclonal antibodies; 15 such antigens were originally described, and this number has now increased to about 400. The CD molecules act as markers of different types of cells; for example, CD4 marks T helper cells and CD8 cytotoxic T cells. Among its many effects, extracorporeal photopheresis suppressed CD71 expression in healthy donors and increased the numbers of CD4(+) CD25(+/high) T cells in patients with cutaneous T-cell lymphomas.

I thought that I had found an antedating of “photopheresis” when I read a 1924 paper on colloidal chemistry (Figure 2). However, on closer inspection “photopheresis” turned out to be an error for “photophoresis”, light-induced movement of small particles, as can be seen in the movements of airborne particles in a shaft of sunlight. Despite their similarity “–pheresis” and “–phoresis” come from totally different Greek roots. The latter is from the adjectival form of the verb ϕορεῖν (phorein), to carry. The confusion may have arisen from the fact that the equivalent Latin verb is ferre. Words with the two different endings are shown in Box 1.

Figure 2. A extract from a paper published in The Journal of the Royal Society of the Arts in 1924, which appears to contain an antedating of “photopheresis” (first citation in the OED = 1984); however, the context makes it clear that the word intended here is “photophoresis”, just as “catapheresis” lower down should be “cataphoresis”

Box 1. Words derived from “aphaeresis” and “-phoresis” listed in the OED; some of them, or derivatives, have medical uses: But more important than observing the effect that a single vowel difference can have on the meaning of a word is the question of whether extraneous photopheresis is effective in the several conditions it is used to treat. The conclusions of 15 systematic reviews in different conditions are summarized in Table 2. Judge for yourself.