One word stands out from those listed in the Oxford English Dictionary (OED) as having been first recorded in 1983 (Table 1): Rett [syndrome], an X-linked disorder, with slow development, followed by dementia, loss of manual skills (with frequent hand wringing), apraxia and ataxia, autistic features, irregular breathing with hyperventilation, and seizures. 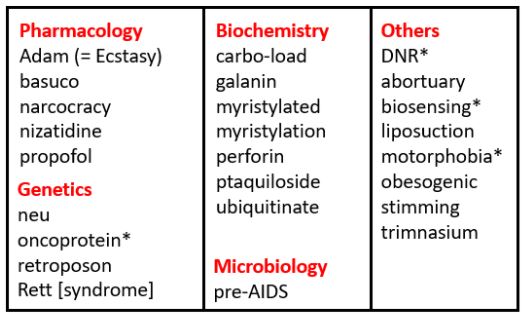 It catches my eye because the OED includes relatively few syndromes of any kind as headwords, and only a handful of biomedical ones. In the years from 1970 to 1982 inclusive I have previously noticed only four: Angelman syndrome (1972), Asperger’s syndrome (1971), Nelson’s syndrome (1971), and Polle syndrome (1977). In the whole dictionary only 15 syndromes feature as main headings (the bold entries in Box 1). Closer inspection turns up another 108 syndromes hidden as subsidiary headings under other words (also listed in the box); for example, to find “toxic shock syndrome” you need to look under “toxic”.

Box 1. Syndromes included in the online OED as main headwords (in bold) or subsidiary headwords 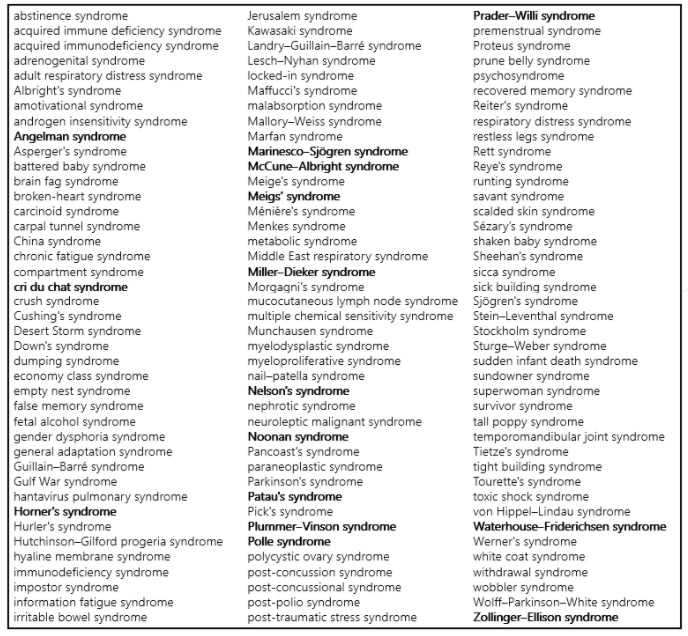 However, the OED is a rich source of information through the many citations it includes, and a careful search for syndromes turns up 199 other syndromes that haven’t been accorded headings of their own, a total of 322. Even so, this is still dwarfed by the total number that could have been included. And some of the omissions are unaccountable. For example, Plummer–Vinson syndrome is included, but Brown Kelly–Paterson syndrome is nowhere to be seen. I suppose it might have been included had it been the Oxford Scottish Dictionary. On the other hand, the law of NOMEN (Non-Original Malappropriate Eponymous Nomenclature) predicts that no syndrome will be named after those who described it first. There is a DPhil project here for a keen lexicographer who would like to trace the history of syndromes and fill in the gaps in the dictionary’s headwords.

So what is a syndrome? In Greek συνδρομος means concurrence, and the OED gives three definitions. First, labelled relevant to pathology: “A concurrence of several symptoms in a disease; a set of such concurrent symptoms”. CREST is a good example, with its five components, Calcinosis, Raynaud’s phenomenon, Esophageal dysfunction, Sclerodactyly, and Telangiectasia. So is the LEOPARD syndrome: Lentigines, ECG conduction defects, Ocular hypertelorism, Pulmonary stenosis, Abnormal genitalia, Retarded growth, and Deafness.

An obsolete transferred use (“A concurrence, concourse; a set of concurrent things”) is followed by a more recent definition, with a first citation from 1955: “a characteristic combination of opinions, behaviour, etc.; frequently preceded by a qualifying word”.

However, these definitions do not take account of entities that are called syndromes despite not being combinations of features. For example, “white coat syndrome” is not a syndrome; it simply describes the rise in blood pressure that occurs when it is measured in the clinic. It may imply different conditions, but it is not itself a collection of signs or symptoms.

The OED also observes the distinction between a disease or condition and the syndrome that it produces, as in its definition of “miserere mei”: “Intestinal obstruction; the clinical syndrome (severe abdominal pain, faecal vomiting, and obstipation) characteristic of this.”

Susan Sontag in AIDS and Metaphor, her 1989 update of her classic 1978 essay Illness as Metaphor, wrote that “AIDS is not a single illness but a syndrome, [which] makes it more a product of definition or construction than even a very complex, multiform illness like cancer.” Her insight into how syndromes are often framed can be seen in the way that they are sometimes fabricated by postulating that because a series of unrelated outcomes are linked by a common cause, they constitute, so it is suggested, a syndrome. An egregious example of this is the “SILENT syndrome” (Box 2), which is no syndrome at all.

Box 2. Reported features of the so-called SILENT syndrome (“the Syndrome of Irreversible Lithium Effectuated Neuro Toxicity”), as reported by Adityanjee et al. (2005); this is not a syndrome, but a list of possible adverse effects of lithium and adverse reactions to it, including complete syndromes

While searching the OED for examples of syndromes, I came across a typo in a citation from a 1989 BMJ paper by Helen M Kingston, titled “Dysmorphology and teratogenesis”, in a series titled “ABC of Clinical Genetics”. Here it is, before it gets corrected (Figure 1).

Figure 1. The fetal alcohol syndrome as purportedly described in The BMJ in 1989