In reviewing words that have been first recorded in the 50 years since I qualified as a doctor, I have noticed how frequently names of viruses have appeared, rather like the way in which infections often feature in 2021’s medical anniversaries. But infections have always been with us, so this is not perhaps surprising. No more than a handful of viruses have entered the OED each year, but there is at least one in most years. For example, 1981, which I have just reviewed (Table 1), features the Hantaan virus. The complete list for 1970–2020 is in Table 2. 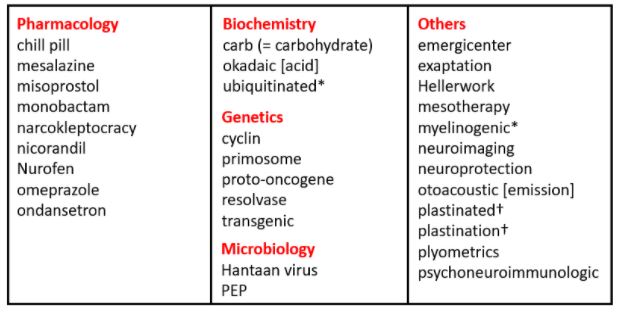 †The terms “plastination” and “plastinated” were invented by the German anatomist Gunther von Hagens (US Patent 4,320,157) to describe the method he used for preserving dissected tissues by embalming with formaldehyde, dehydration with acetone, and infusion of an epoxy resin; however, there is an instance of the word “plastinated” in a paper titled “A contribution to the history of the fresh-water Copepoda.” by FW Cragin, published in the Transactions of the Annual Meetings of the Kansas Academy of Science (1881-1882; 8: 66-81): “The mandible consists of one plastinated segment, and is similar to the mandible described under C. Clausii.” I don’t know what the word means in this context, assuming it is not a misprint for something different, and I have not found another instance of this anywhere else.

Table 2. The names of viruses that have appeared in the OED with initial citations in the last 50 years; I have found two minor antedatings (1 and 2 years) 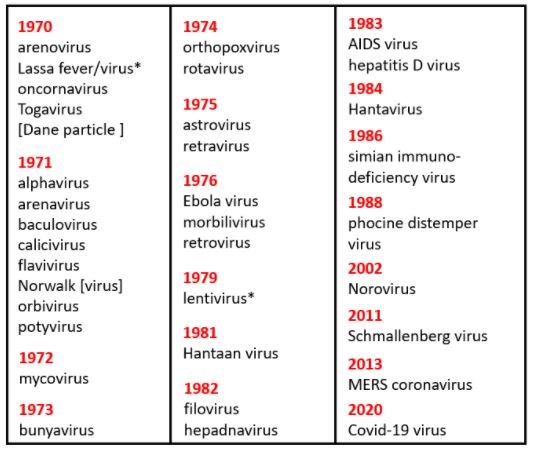 The first virus to be so called, by the Dutch microbiologist and botanist Martinus Willem Beijerinck, was the tobacco mosaic virus. He described it in a monograph titled Ueber ein Contagium vivum fluidum als Ursache der Fleckenkrankheit der Tabaksblätter (Amsterdam: Johannes Müller, 1898; Figure 1). He used the Latin term “Contagium vivum fluidum” since he recognized the infective property of the virus but thought that it was some sort of fluid. However, in the German text he used the word virus to describe the organism. 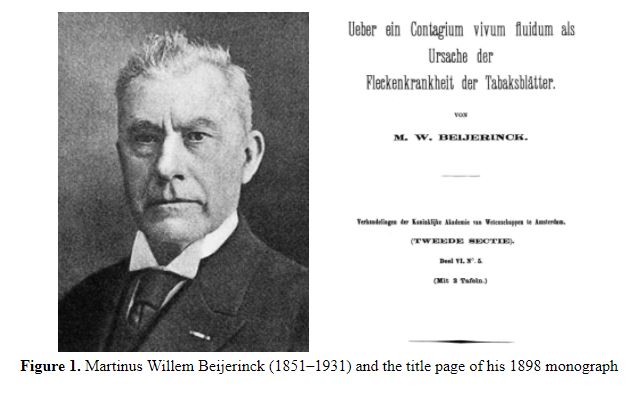 How is it then that we can find a range of earlier uses of the word “virus” apparently referring to other organisms? Here, for example, is an extract from a paper in the Philadelphia Journal of Homoeopathy in 1954: “The idea had been entertained by some … that variola virus, transferred from human to kine, if it would not become the genuine cow-pox, would, nevertheless, become so modified as to answer all the purposes of the genuine.” And here is Edward Jenner, writing in 1799: “Mr. Henry Jenner [his nephew and assistant] inserted the vaccine virus into the arm of a child.”

The reason is that before the word “virus” was used to describe filterable infective particles, it had other meanings. The IndoEuropean root WEIS, one of several that meant to flow, was particularly applied to unpleasant oozes. This gave the Greek word ἰός, venom, the poisonous secretion of a snake. In preclassical Greek the word began with a digamma, ϝιός, a letter that was later lost in classical Greek, but persisted when it came into Latin, as in “virus”. Virus meant venom, as in Greek, and therefore any poisonous substance. It could also mean any secretion, plant or animal, with medicinal or magical power, and hence semen. Indeed, the earliest meaning in English was just that, although the OED gives only a single instance, in a translation, by John Trevisa, of De Proprietatibus Rerum by Bartholomaeus Anglicus (c. 1398): “for it is a man his owne membre oþer for virus come ouȝt þerof.” A little later it was first used to describe a discharge such as pus from an ulcer or wound, and later still any substance used for vaccination. Hence the examples cited above. From the late 16th century it was also used to mean snake venom. Other derivatives are shown in Figure 2. 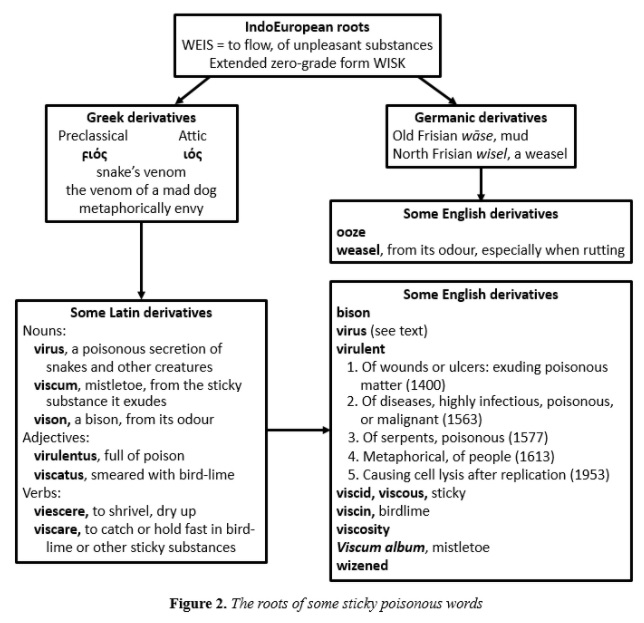 In the OED the earliest use of the word “virus” as a filterable infectious agent is from the Journal of Comparative Pathology and Therapeutics (1900) “The virus of foot-and-mouth disease passes through a Berkefeld filter when it is suspended in a watery liquid.” This had been reported in the same journal in 1899 by Loeffler & Frosch, who described a filterable substance “some corpuscular element” that caused foot and mouth disease. They mentioned the word “virus” several times, but using it in its earlier meaning, referring to “the virus found in the contents of vesicles”, admitting that they could not culture an organism.

Then a new meaning emerged: a self-replicating program or piece of code that can take over your computer or network, activated by the user. A worm is similar but activates itself. The earliest OED citation is to a sci-fi novel, When HARLIE was One, by David Gerrold (Jerrold David Friedman): “You know what a virus is, don’t you? The virus program does the same thing.” However, there is an earlier instance in a 1970 short story, “The Scarred Man”, by Greg Benford: “Soon enough I had devised a ‘virus’ that could be cured with a program called Vaccine.” A proper computer virus was created by Fred Cohen in 1983, after Rich Skrenta had produced a harmless rudimentary one in 1982.

So when something spreads like wildfire through social media, it is said to have gone viral. If I tweet news of this column and everybody who reads the tweet retweets it, the news will go viral. Here’s my tweet. If you start the retweeting process and everyone else follows, we may beat the current record of 4.28 million retweets.