During the final weeks of 2020 I explored biomedical words that were labelled in the Oxford English Dictionary (OED) as having first appeared in print in the years from 1970 to 1979. Of about 3000 new words that appeared during that time, 467 (about 16%) could be regarded as biomedical. Of those, I was able to find earlier instances (antedatings) of 61 (Figure 1), of which 38 took the initial dates of appearance to before 1970. That left about 430 words to analyse. As I explore later years I shall probably find antedatings that will take a few of the later words back to the 1970s but too few to make much difference to the current count. 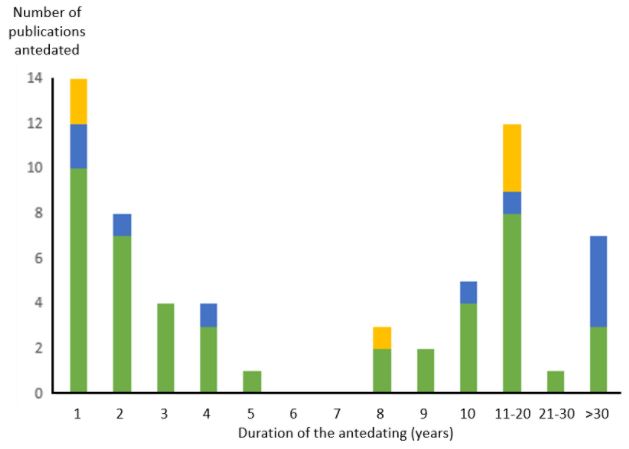 Figure 1. Frequency distribution of the antedatings of words listed in the OED as having first appeared in print during 1970-9; the most striking example is tui na, a Chinese term, antedated by 84 years, from 1979 to 1895; The BMJ (blue; n = 10) and PNAS (orange; n = 6) were the most common sources of antedatings

Fields
Most of the words come from the field of pharmacology (137) and most of the drug names are still to be found in formularies and pharmacopoeias. Biochemistry is next, with 88 entries, followed by microbiology (57), and genetics (12).

Linguistic roots
Most of the words derive directly from either Greek (n = 122) or Latin (n = 58) words. For example, “enkephalin” (1975), an endogenous peptide with morphine-like actions, comes from a Greek word for the brain, ἐγκέϕαλος.

Other words can be traced back to Greek or Latin roots but have reached English through intermediate forms. For example, Woody Allen’s orgasmatron (1973), a device, fanciful of course, that induces orgasm, which first appeared in his movie Sleeper, comes from an ancient Greek verb ὀργᾶν, to swell with sexual desire, which later spawned the noun ὀργασμός, with the addition of a suffix –tron, chopped off from words such as electron, from ἤλεκτρον, amber, and later inventions such as positron, neutron, betatron, and animatron.

Many of the words, 91 in all, are hybrids from two or occasionally three languages. These are most commonly mixtures of Greek and Latin (n = 67), which Fowler in 1926 called “barbarisms”. For example, adrenoleukodystrophy (1973) comes from two Latin roots and three Greek ones.

A few of the words are hybrids that unusually combine Greek or Latin with an initialism. GABAergic (1972), for example, comes from GABA (gamma-aminobutyric acid) plus ἔργον, work; levodopa (1970) is from the Latin adjective laevus, left [handed], and DOPA (dihydroxyphenylalanine); oncornavirus is from ὄγκος, mass or bulk, RNA (ribonucleic acid), and Latin virus, venom; and vipoma is from VIP (vasoactive intestinal polypeptide) plus the Greek suffix –ωμα, used in English to indicate a tumour.

Brand names
There are seven brand names in the list: EpiPen (1979), adrenaline/epinephrine; Halcion (1974), triazolam; mandy (1970), slang for Mandrax, a combination of the hypnotic methaqualone and the sedative antihistamine diphenhydramine hydrochloride, when used recreationally; Nicorette (1974), nicotine; Retin-A (1973), tretinoin; Rohypnol (1971), flunitrazepam; and Tagamet (1974), cimetidine. Rohypnol is also well-known as a so-called “date rape” drug, a term that also originated in the 1970s.

Eponyms and toponyms
When I reviewed the use of eponyms in medical practice up to 1999, I surveyed 382 randomly sampled from Stedman’s Medical Eponyms, of which 67 (18%) were first described in the 1970s, according to their first mentions in PubMed. However, in the OED list I found only 21, after antedatings, including four toponyms. The complete list is given in Table 1, and it is not clear why others are not included. Castleman’s disease (1973), for instance, is cited in the OED under “mesentery” but is not a headword in the dictionary. 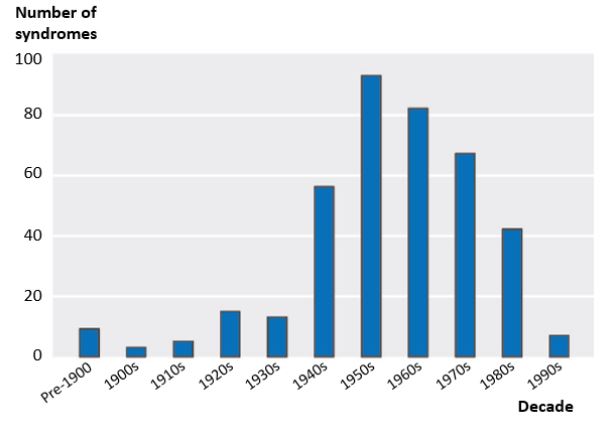 Figure 2. Frequency distribution of a random sample of 392 eponymous syndromes and diseases listed in Stedman’s Medical Eponyms, according to the year in which the eponym was first mentioned in a paper listed in Pubmed (from The BMJ 2014; 349: g7586)

Table 1. Eponyms and toponyms first recorded in the OED in the 1970s (including two antedatings*) 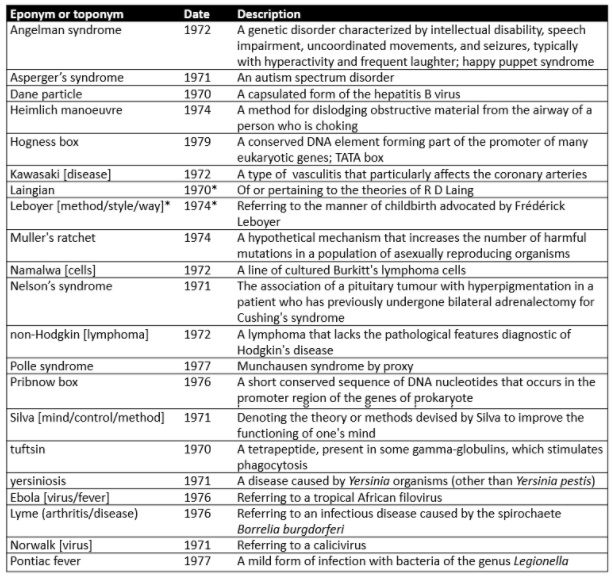 Most topical words
Valproic acid (1972) made the news last year when it was dealt with in the Cumberlege report. However, the most topical word is undoubtedly corona (1974), Latin for a crown, a shortened form of “coronavirus”, taken from the similarity that the first coronaviruses to be identified bore to the crown-like appearance of the outer rim of the sun during a total eclipse. The original full-length word, “coronavirus”, was coined in 1968.