The list of words first recorded from 1976 in the Oxford English Dictionary (OED; Table 1) includes, unusually, an erroneous coinage. The words “inotropism”, “inotropic”, and “inotropy” all relate to the contractility of muscle, typically in reference to cardiac muscle. They entered English in 1902–5, derived from the German word inotrop, first used by TW Engelmann in 1896, and taken from the genitive form, ἴνός, of the Greek word, ἴς, meaning a sinew or tendon and hence muscle or strength. However, some have made the error of writing “ionotropic” or “ionotropy” instead, perhaps through confusion with “ionotropy” meaning a type of chemical change that occurs when an ion detaches from a molecule and reattaches to another part of it, resulting in a tautomeric form.

That the error persists today is perhaps understandable, since, for example, cardiac glycosides produce positive cardiac inotropy by inhibiting the transmembrane movements of sodium and potassium ions via the Na/K pump. Calcium sensitizers have positive inotropic effects by being what their name says; some, such as levosimendan, also act on ATP-dependent potassium channels. However, the error cannot have originated by confusion with ionic mechanisms, since the first instance, reporting results described in a paper in Naunyn-Schmiedeberg’s Archiv für experimentelle Pathologie und Pharmakologie, was published in 1939, when such mechanisms had not yet been described. 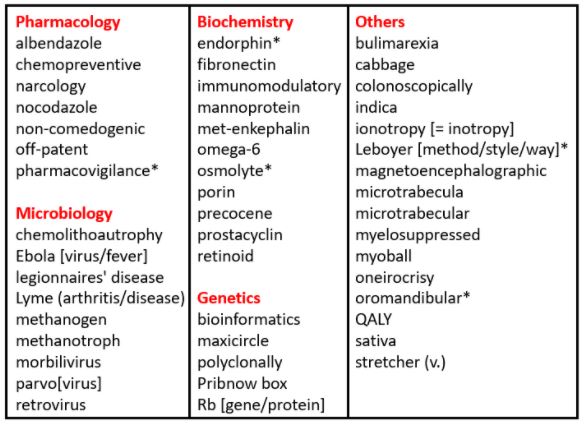 The OED brands these erroneous usages “alterations”, an etymologist’s euphemism for “mistakes”. The word is also used to describe words that come about through folk etymology, which the OED defines as “the popular perversion of [a] form of words in order to render it apparently significant”. In simpler terms, it occurs when people incorrectly infer the origin of a word phrase and change the form of the word to accord with their view of how it came about. It is also used to refer simply to an incorrect view of the etymology of a word, without necessarily leading to a change in its form. It is sometimes also called “reanalysis”.

“Hiccough” for example, is an incorrect spelling of hiccup, because it is supposedly related to coughing.

Isidore of Seville is responsible for the misspelling of “fetus” with an added o. He reasoned that it came from the Latin foveo, I keep warm, rather than feto, I breed.

The origin of the word “marijuana”, which I discussed last week, is unknown. It may come from a Nahuatl word, “mallihuan”, which means a prisoner, referring to what it does to the mind. Folk etymology then converted this, via the Spanish name María-Juana, to marijuana. Slang variants include Mary, Mary Jane, Mary and Johnny, Mary Ann, and Mary Warner.

The IndoEuropean root [S]MER, meaning grease or fat, gives us words such as smear, smorgasbord, literally goose-fat table, and Myristica, the nutmeg genus, at one time used as an unguent. But folk etymology dropped the s and replaced the r with a d, influenced by the Latin word medius, middle, producing the smeary substance in the middle of bones, medulla, marrow. Whence the pithy medulla oblongata and renal and adrenal medullae.

An old Marathi word meaning cholera, moḍaśī, adopted into Portuguese as “mordexim”, became a now obsolete English word for the disease, mordisheen. Folk etymology then produced “mort-de-chien”, as if it was something to do with death from the bite of a dog.

An algorithm is a process or set of rules that is used in computing, machine translation, and linguistics. The OED defines its medical use as “a step-by-step procedure for reaching a clinical decision or diagnosis, often set out in the form of a flow chart, in which the answer to each question determines the next question to be asked.” Algorism is an Arabic system of counting, named after the ninth century mathematician Abu Ja’far Mohammed Ben Musa al-Khowarazmi. In the 17th century, folk etymology turned “algorism” into “algorithm”, by confusion with words such as arithmetic and logarithm, which come from the Greek word for a number, ἀριθμός. “Algorithm” then sometimes undergoes further torturing, becoming “algorhythm”, as in a paper about amiodarone, describing an “advanced paediatric life support algorhythm for malignant ventricular arrhythmias”. And there was I thinking that I’d been using amiodarone as an antialgorhythmic.