Between 1532 and 1564 the French physician François Rabelais, initially using the anagrammatic pseudonym Alcofribas Nasier, published a scurrilous five-volume novel La vie de Gargantua et de Pantagruel, in which he introduced many new words of his own coinage. 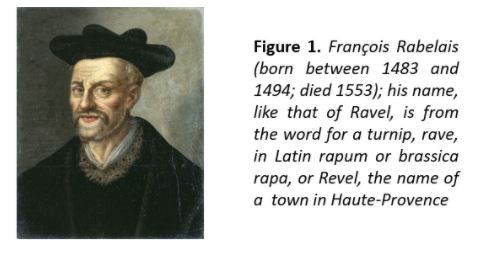 Last week I discussed the origin of the word “laughter”, from Greek and Latin words meaning to shout or resound. The Greek word for laughter was γέλως, from which come a range of gelastic words, all found in the Oxford English Dictionary (OED). They include gelasin, a dimple in the cheeks; geloscopy, observation of people’s characters from the nature of their laughter; gelotometer, a gauge for measuring laughter; gelastic, serving the function of laughter or risible; and gelastics, remedies that act by eliciting laughter.

However, it does include three other derivatives, citing an essay by the novelist and poet George Meredith (1828–1909) as their earliest source: hypergelast, agelast, and misogelastic, by which Meredith described people who are all, in different ways, inimical to comedy.

Hypergelasts are people who laugh at everything; Meredith described them as “the excessive laughers, ever laughing, who are as clappers of a bell, that may be rung by a breeze, a grimace; who are so loosely put together that a wink will shake them.” In so doing they show themselves incapable of understanding what is truly comic in comedy.

An agelast is a person who never laughs or has no sense of humour. Meredith described such people as “non-laughers—men who are in that respect as dead bodies, which, if you prick them, do not bleed.” He coined the word from the French word agélaste, one of the words that Rabelais had introduced in his novel. Rabelais took it from the Greek word ἀγέλαστος, grave or gloomy. Its Latin equivalent, agelastus, was used to describe the orator Marcus Licinius Crassus, as attested by Pliny the Elder in his Naturalis Historia (Book 7, Chapter 19): “…ferunt Crassum, avum Crassi in Parthis interempti, numquam risisse, ob id Agelastum vocatum” (Crassus, the grandfather of [the triumvir Marcus Licinius] Crassus, who fell in Parthia, never laughed, and was therefore called Agelastus [by the satirist Gaius Licilius]). Heraclitus used the word to describe the Apollonian Sybil and it was also the name given to a stone at Eleusis, ἡ πέτρα ἀγέλαστα, on which the goddess Demeter supposedly sat.

One step beyond the agelast lies the misogelast, who not only has no capacity for laughter, but positively hates it. The prefix miso- is from the Greek μῖσος, hatred, as in misanthropy, misogyny, misology, misoneism, and misotheism.

Although only the adjectival form, misogelastic, is attested in the OED, quoting Meredith, instances of the noun can be found. He who is laughter-hating, says Meredith, “soon learns to dignify his dislike as an objection in morality”.

Puritans were misogelasts. On 2 September 1642, they ordered the indefinite closure of all London theatres, referring to “Seasons of Humiliation” and “Spectacles of Pleasure, too commonly expressing lascivious Mirth and Levity”.

Rabelais hated agelasts, who reacted adversely to his brand of satirical humour, accusing him of heresy and impiety: “la calumnie de certains canibales, misanthropes, agélastes, avoyt tant contre moy esté atroce et desraisonnée, quelle avoyt vaincu ma patience: et plus n’estoys deliberé en escripre une iota” (the calumny of certain cannibals, misanthropists, and agelasts had been so atrocious and unreasonable that it destroyed my patience and I decided not to write another jot). Elsewhere he described them as “mangeurs de serpents”, snake eaters.

Rabelais is remembered and his works have survived; his critics are long forgotten. It is a mistake to give in to the intemperate demands of the agelasts and misogelasts.