Although the two words literally mean “drawn back” one should not be seduced by the etymological fallacy—believing that a word always means today what its etymology suggests it should. I suggested that in relation to scientific publications the two words have different implications: that “retracted” implies that the work is still available for consultation, i.e. is archived, whereas “withdrawn” implies that it has disappeared. However, others have reminded me that works that are labelled “retracted” may not be archived, and it is conversely true that works that are labelled “withdrawn” may remain available.

As I learnt from an article in Retraction Watch, the publishers Wiley have a “Policy for Handling Retractions, Withdrawals, and Expressions of Concern” (here). They don’t clearly define “withdrawal” but they imply that it includes “deletion of the Version of Record”, which, they say “is rare”. However, they will consider deletion in “limited circumstances”, which they outline. Other publishers are not always so specific.

This is all confusing. It confused me when I noticed that a preprint that had been deposited in medRxiv was later marked withdrawn. I assumed that it was no longer available, but I then learnt that it was, and, as of today, still is. I searched medRxiv for the article by the first author’s name; the withdrawal notice appeared. But where was the original? I eventually found it by clicking on a sentence near the foot of the page: “View comments on earlier versions of this paper”. It can also be found under “Info/history”. The FAQs on medRxiv explain this if you search through them, but if a paper has been retracted, shouldn’t the original version be clearly and prominently signposted upfront?

COPE, the Committee on Public Ethics published excellent guidance in 2009 about retractions. The guidance is too comprehensive for brief summary here. It describes the purpose of retraction, the form it should take, matters to do with notices of retraction, who should issue the retraction, when it should happen, and other related matters. It also contains the following sentence: “Retracted articles should not be removed from printed copies of the journal … nor from electronic archives but their retracted status should be indicated as clearly as possible.” The word “withdrawn” does not appear in the guidance.

COPE’s latest guidance is not as explicit. The word “withdrawn” does not appear, but neither does “archive”. Nor is there explicit advice not to remove the original material, although they do say that “In extremely limited cases it may be necessary to remove an article from online publication…”, implying that generally one would not. But, later on, under the heading “Republishing retracted content”, it says that when an author wants to republish some of the retracted work, “the original article should not be completely removed or ‘replaced’, but should be retained and linked to” [italics in the original], implying that it might otherwise have been removed. More confusion.

In a stream of eight tweets, Harlan Krumholz has written that “Retraction is not a thing @medrxivpreprint. Only withdrawal. Retraction conveys the sense that we approved it in the first place, which is not the case for #preprint. We screened it, but did not review it or endorse it.” This seems to me an illogical distinction. Something posted on medRxiv has been published [“made generally accessible or available for acceptance or use (a work of art, information, etc.); presented to or before the public”; OED]. And if something has been published, it can properly be described as having been retracted; that it did not originally have the imprimatur of medRxiv is irrelevant.

In the Ars Poetica, (lines 388–90) Horace writes “… nonumque prematur in annum, Membranis intus positis, delere licebit, Quod non edideris; nescit vox missa reverti”: “lock up your parchment until the ninth year and destroy it if you will; unpublished it needs no retraction”. This also reflects what he wrote in one of his epistles: “Et semel emissum volat irrevocabile verbum”: “And once sent out a word takes wing and cannot be recalled.”

While in prison, awaiting execution, Mary Stuart embroidered on her cloth of estate the words “En ma Fin gît mon Commencement”, words that expressed her belief in eternal life after death. T S Eliot quoted these words in translation at the end of his poem “East Coker”, but inverted them at the start: “In my beginning is my end.” An archive records what came at the beginning (ἀρχή, see Figure 1), without which we have an incomplete picture of the end. 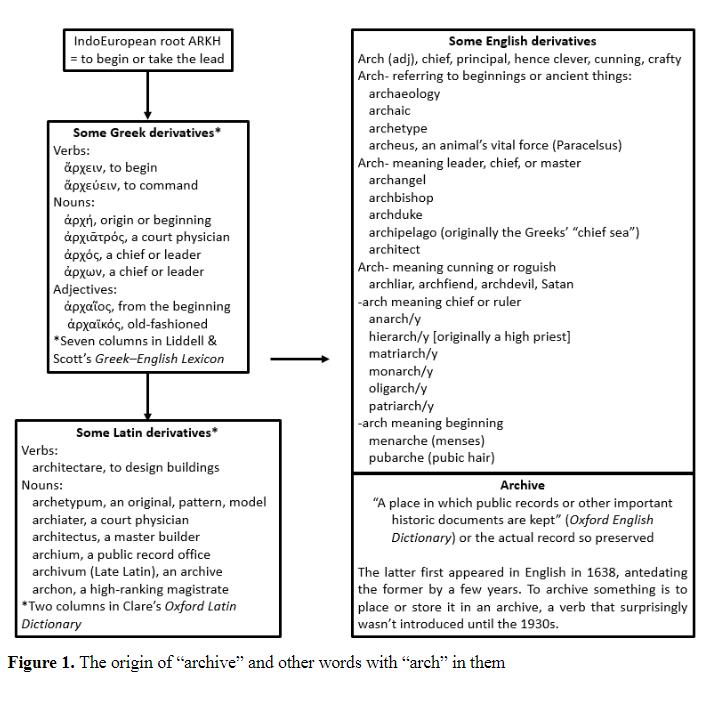 Acknowledgement: I am grateful for helpful discussions with Ivan Oransky of Retraction Watch, although he and his colleagues may not necessarily agree with the opinions expressed in this column.