While we are all self-isolating, people are starting to think about autarky, self-sufficiency. For example, that doyen of ancient Greek and Roman history as a reflection on modern affairs, Peter Jones, in his always fascinating weekly Spectator column, “Ancient and Modern”, reminded us of this in the issue of 21 March under the title “How to be self-sufficient”.

The IndoEuropean root ARK meant to hold, contain, or guard, giving the Latin word arca, a chest, a box, a coffer or a coffin, a cell as a place of confinement, or the wind-box of an organ. Hebrew has two different words, one for Noah’s ark the other for the Ark of the Covenant. But in English only one word was used for both—earc, first attested in Old English in about the 9th century. Another spelling, arche, taken directly from Old French in about the 13th century, seems to have been a dialectic form, last recorded in the 16th century, “ark” having already appeared in the 12th.

Arcana in Latin were secrets or mystic rites, hidden from general view, giving us arcane, hidden, concealed, or secret.

In Greek ARK gave the verb ἀρκεῖν, to ward or keep off, which then came to mean to make good or achieve and hence to suffice or satisfy. Adding a suffix from αὐτος, self, gave αὐτάρκεια, self-sufficiency or independence. The corresponding verb αὐτάρκειν meant to supply with necessities, emphasizing the Greek view that self-sufficiency was for the state to provide. In English autarky first appeared in the 17th century to denote the self-sufficiency of God and only gradually came to mean individual self-sufficiency. Quite late on, in the 20th century it acquired a connotation of economic self-sufficiency, typically in a political context. This in turn spawned the noun autarkist, also used attributively, referring either to individuals or to countries that prefer to keep to themselves, denying entry to outsiders and preferring not to create economic unions. The UK has recently joined the ranks of the autarkists.

In his article in The Spectator, Peter Jones traces the history of autarkeia in ancient Greece, from the statesman Pericles to the atomist Democritus, the cynic Diogenes, and Socrates, Plato, and Aristotle (Figure 1). Autarky has been defined and discussed in many different contexts since then: self-sufficiency of cognitive powers (Thomas Aquinas); self-sufficiency of reason (David Hume, Leo Strauss); individual self-sufficiency as a route to equality (Thomas Jefferson), social and political self-sufficiency (John Rawls), and in feminist attacks on the idea of the self-made man. Others have commented on literary self-sufficiency. In his book On Poetry & Poets (1957), T S Eliot wrote that “a general autarky in culture simply will not work: the hope of perpetuating the culture of any country lies in communication with others.” 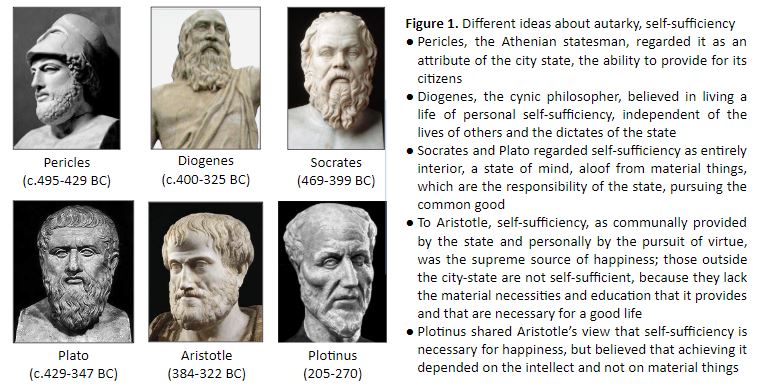 Elsewhere in the same issue of The Spectator as Peter Jones’s article, Matt Ridley exhorts us not to return to “autarky and localism”, but he must know that it is probably too late. Today we concentrate on self-sufficiency through acquisition of material things, exemplified by the phenomenon of panic buying, and we are keen to exclude others. Until the publication of the first Supplement in 1972, the Oxford English Dictionary had no entry for “autarky”; it spelt it “autarchy”. But autarchy, then as now defined in a separate entry, means something entirely different, literally self-rule. And the OED defines it starkly as “absolute sovereignty, despotism”. Perhaps we are confusing the two words.