This year saw me achieve a significant, albeit distressing personal milestone—putting our home in India up for sale on behalf of the family. An oasis of calm and greenery in the centre of an increasingly frenetic city, this family base of nearly 100 years is inseparable from deeply cherished memories of grandparents and summer holidays, and, for my British and biracial children and grandchildren, the opportunity to get to know and love the Indian side of their heritage. The passing of one very elderly grandparent and the increasing impracticality of leaving the other alone in a large home were convincing enough arguments in favour of a sale. But an even stronger justification in my view, is the threat posed by the climate crisis.

An as yet unanswered question which has concerned me for many years, is whether a time will come when international travel becomes as exceptional as it was a century ago. The history of the UK is woven very much around emigration and travel to distant lands for thousands of years—initially driven by a thirst for knowledge and exploration, later to colonise much of the world and more recently, in search of a better life. Until the 1980s, the UK was a net exporter of people—more people left the country than came to it. [1] A common understanding in past times, heartbreaking as it must have been, was that the emigrants may never return, given the challenges and risks of travel by sea. The advent of aviation, and subsequently, the extraordinary rise of commercial aviation, have utterly transformed the ease of travel and our sense of entitlement to it. Against this background, since its launch in 1948, much needed capacity in the NHS has been filled by ethnic minority doctors, as well as other health professionals migrating to the UK from the developing world. During past decades they have been able to care for family in their countries of origin and to enjoy regular returns to their culture and heritage as often as they wished.

This status quo is about to change, indeed it must change, if we are to avoid dangerous levels of global warming. We are in a climate crisis which is progressing even more quickly than we feared. The current world trajectory of rising CO2 emissions indicates that our global carbon budget to limit global warming to 1.5 degrees C will be used up by 2030. This means that we need to bring annual greenhouse gas emissions to zero as rapidly as possible. [2]

Consequently, our individual “quota” for emissions needs to be reduced now especially as decarbonized air travel remains a distant goal despite the race to develop new technologies. Could it be that we find ourselves coming full circle with travel about to become a rare luxury once again?

Holiday plans are modifiable, but how will the risks of climate breakdown affect NHS policy for international recruitment of staff, especially when this recruitment is set to increase? [3] How will health professionals from overseas manage to care for elderly relatives in distant countries?

The voices of ethnic minority doctors appear muted. There is an acknowledged lack of diversity in the environmental professions and environmental campaigns in the UK. [4] The evidence is mixed as to where the problem might lie and how climate discourse and action could be made more inclusive. On the one hand, it is recognised that the socio-economic inequalities, alienation, and racism that define the everyday lives of ethnic minority people denies them the psychological safety for activism and the luxury of protest, especially if it risks prison and deportation. [4,5] We also know from surveys that ethnic minority university students are significantly less likely to engage with environmental issues or report having changed their own behaviour due to environmental concerns. [6]

The NHS with its duty of care for everyone’s health and wellbeing must lead the way in examining the environmental impact of its recruitment strategies, while ethnic minority doctors and other health professionals need to enhance their own knowledge about climate change to share their narratives. They must demand a place at the top table of these discussions as a means to achieve low carbon solutions which acknowledge the challenges ahead.

As for me, climate anxiety has been my constant companion since the late 1980s, but with awareness growing and “climate emergency” declared the Oxford Word of the Year in 2019, I no longer feel alone. Two of my primary school aged grandchildren have embraced vegetarianism. The message is getting through. Ethnic minority staff from overseas face a bleak future in terms of separation from their families and countries of origin. Yet I have real hope that we who come from countries facing the worst burdens of the climate emergency, have the opportunity to help shape the collective activism necessary to create a better and more equal NHS which demonstrates its leadership in climate action. 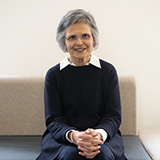 Acknowledgements: I thank Dr Aruna Stannard for her invaluable suggestions and comments on the first draft of the paper.