The Coronaviruses were first identified by a group of virologists (J D Almeida, D M Berry, C H Cunningham, D Hamre, M S Hofstad, L Mallucci, K McIntosh, and D A J Tyrrell) who in 1968 relayed their findings to the journal Nature, which published a brief annotation (Figure 1). As the journal reported, “these viruses are members of a previously unrecognized group which [the virologists] suggest should be called the coronaviruses, to recall the characteristic appearance by which these viruses are identified in the electron microscope.” They had compared the “characteristic ‘fringe’ of projections” on the outside of the virus with the solar corona (not, as some have suggested, the points on a crown). Figure 2 illustrates this. 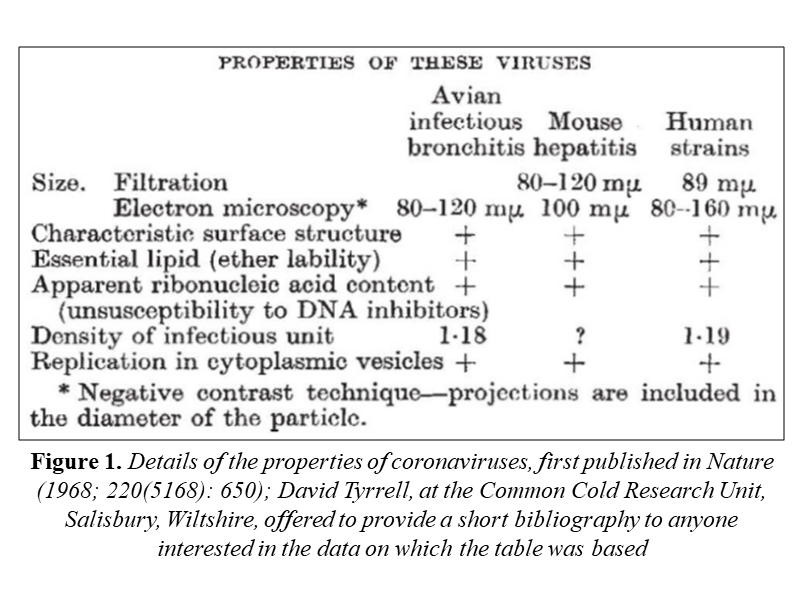 As I have previously discussed, the IndoEuropean root [S]KER is actually two separate roots with different meanings, giving rise to many unrelated words. For example, “scherzo” comes from the root [S]KER, to leap. On the other hand, “corona” comes from a different root altogether, [S]KER, to turn or bend. It is the second of these with which I am concerned here.

Some derivatives come via Old English: ring comes from hring, ridge from hrycg, a spine, and shrink from scrincan, to wither or shrivel up.

Ruck is metathetically from the Old Norse hrukka, a crease or fold, and rucksack from the Old High German, hrukki, the back.

Similarly, the Frankish word hrunkjan, to wrinkle gives the Old French word fronce, a pleat, from which we get flounce. Other Old French words renc and reng, meaning a line or row, give us ranch, rank, rink, and range, with derivatives such as arrange, derange, enrange, and outrange.

Kurtosis, a characteristic that defines the shape of a frequency distribution, comes from the Greek word κυρτός, bulging or convex. Reduplication of KER to KIKRO gives cerclage, circa, circadian, circinate, circle, circum-, circus, cirque, cricoid, search, and recherché, all via Latin, but eventually from the Greek κίρκος, a ring. Homer’s metathetic form κρίκος gives us the cricoid cartilage.

From the Greek κορώνη, a crow or some seabird, comes the carrion crow, Corvus corone, with its curved beak, and from κορώνίς, curved, comes the Latin corona, a crown, chaplet or wreath, fillet or circlet of gold or other material. This gives us English loan words for certain foreign currencies: koruna from the Czech Republic, krona from Sweden and Iceland, and krone from Denmark and Norway. The Old English coin a crown, worth five old shillings (25 pence), has the same origin, as does the headgear.

Latin corona also gives us corona, which has acquired many different meanings in different areas (Table 1).
In addition to all these standard meanings, sybarites will recognize the word as the trade-name that the Havana firm of Manuel Lopez and Company chose for their cigars, first marketed in 1877, characterized by having long tapering bodies and blunt ends. It is also the name of a brand of beer.

After the initial description of coronaviruses in 1968 there was a slow increase in the numbers of publications dealing with them, followed by two peaks, after two epidemics: the severe acute respiratory syndrome (SARS) coronavirus epidemic in 2003-4 and an epidemic of porcine epidemic diarrhoea in North America in 2013 (Figure 3). Identification of the first cases of Middle East respiratory syndrome (MERS or camel flu) in Saudi Arabia in 2012, and then elsewhere, also caused by a coronavirus, may also have contributed. I expect to see another peak following the current epidemic.

Table 1: Different meanings of “corona” and some derivatives 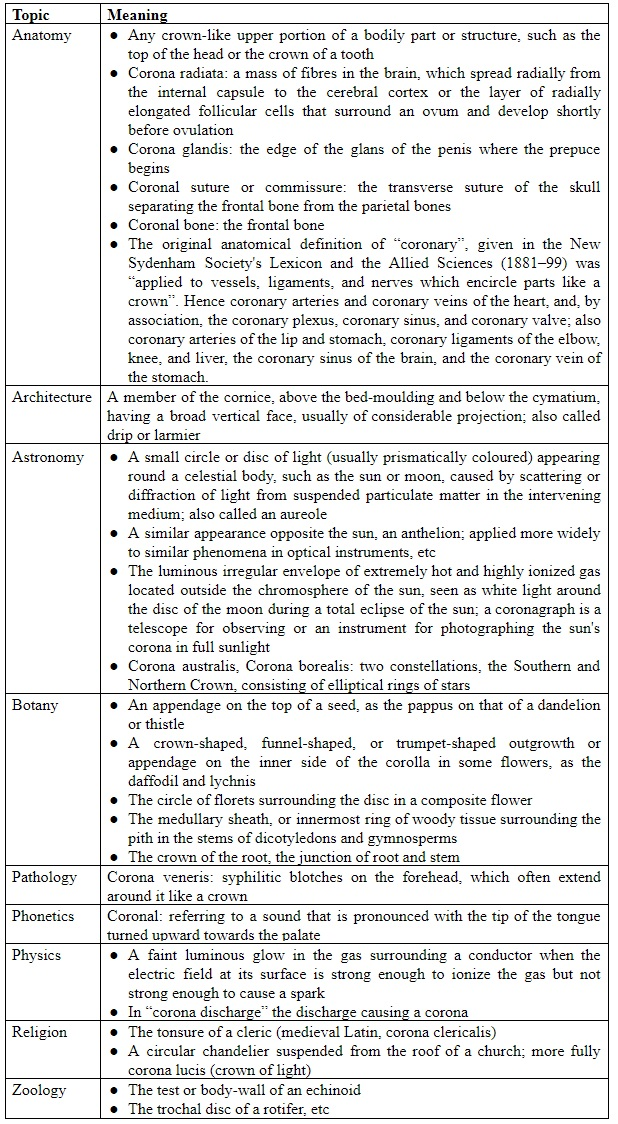