The Oxford English Dictionary (OED) is updated every three months (“on a quarterly basis” as they put it—they mean “quarterly”). The latest updates and additions, published in December 2019, include about 550 items, which do not have to be recently coined—the dictionary is constantly catching up. There are four categories:

1. Words that are completely new to the dictionary This list (162 entries) starts with “a-eastell”, an obsolete Scottish word, first recorded in 1462, meaning “at, in, or to the east”, comparable with “a-westell” (1538), also newly added. It ends with “yiddo” (1972), “a Jewish person … a supporter of or player for Tottenham Hotspur Football Club”. Originally intended as a racist remark, this word has since been espoused by Jewish Spurs supporters themselves.

2. New sub-entries Compound words or phrases that are now included under other headwords (141 entries). The list starts with “away in the head/mind” (1816), included under “away”, a colloquial expression, “chiefly Irish English and Scottish”, meaning “in a state or condition resulting from mental disturbance; mad, out of one’s wits, in a world of one’s own; in a drunken or drug-induced state”. It ends with “Yiddishness” (1903), meaning “Yiddish quality or character”, cognate with the Yiddish word “Yiddishkeit”, already in the dictionary (1888).

3. New senses of old words This list (243 entries) starts with “anti-Semite” (1867), previously listed only as a noun, but now also as an adjective, meaning “Characterized by prejudice, hostility, or discrimination towards Jewish people on religious, cultural, or ethnic grounds; anti-Semitic”. It ends with “zoning” (1977), from Nigerian English, “the system or practice of allocating nominations for certain political offices to candidates from particular regions”.

4. Additions to unrevised entries New senses, compound words, or phrases that were already included as draft entries appended to the end of existing entries, now fully incorporated (32 entries). These are also included in the other categories.

That three of the six examples I have cited are to do with Jews is pure coincidence; one begins with an a and two with a y, and I chose the first and last entries in the lists. However, the lists do contain a striking number of words related to Jews and Judaism and words derived from Yiddish, in all 71 (13%) of the entries (listed in Table 1). The earliest citation for any of these new entries is from 1275; the most recent coinage, “Jewdar”, dates from 2000.

In contrast, I have found only four medical terms among the new entries: Henle, mouth stick, Jewish stone, and Jewish penicillin.

A mouth stick is “an instrument used by a dentist, doctor, or other medical professional when examining a patient’s mouth”. Dating from 1912, it is designated “now rare”.

Henle was the German anatomist and pathologist Friedrich Gustav Jakob Henle (1809–85). The adjective “Henlean” was included in the first edition of the OED, in the fascicle published in December 1898 (Heel–Hod). “Henle” was added in the second supplement, edited by the late Bob Burchfield and published in 1976. It included four eponyms (Table 2). Now the entry has been restructured and antedatings added.

Little has been written in the bioscience literature about Jewish stone or Lapis Judaicus, the spines of fossil sea urchins, ground to a powder and taken with water, which supposedly dissolved kidney and bladder stones. W H Cobb (West J Med Surg 1851; 7(5): 371-84) wrote that Greek physicians used the Jewish stone, “which they found in Palestine, as a remedy for strangury”. Anyone for a randomized controlled trial?

Jewish penicillin is a humorous name for chicken soup or chicken noodle soup (both also new entries), “popularly considered as a remedy for all ailments or valued for its supposed restorative properties”. Is it effective? Well, even in the absence of good evidence, some have claimed that it is essential. Others have reported that its antioxidant properties affect neutrophil function and reduce inflammation associated with viral illnesses. And it may improve cognition and be good for the soul. However, during an outbreak of Campylobacter jejuni infection in Seoul, chicken soup was one of the sources. Allergies and hypernatraemia have also been reported. On the other hand, one of the team who extracted penicillin from a Penicillium mould in 1939, Ernst Chain, was Jewish. Jewish penicillin in another sense.

Table 1. New entries in the OED relating to Jews or Judaism or derived from Yiddish 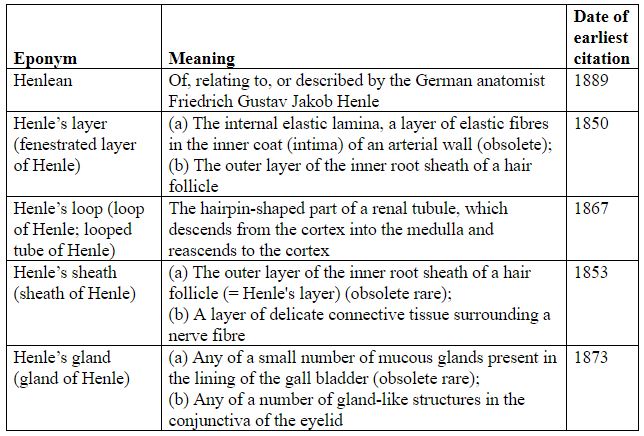